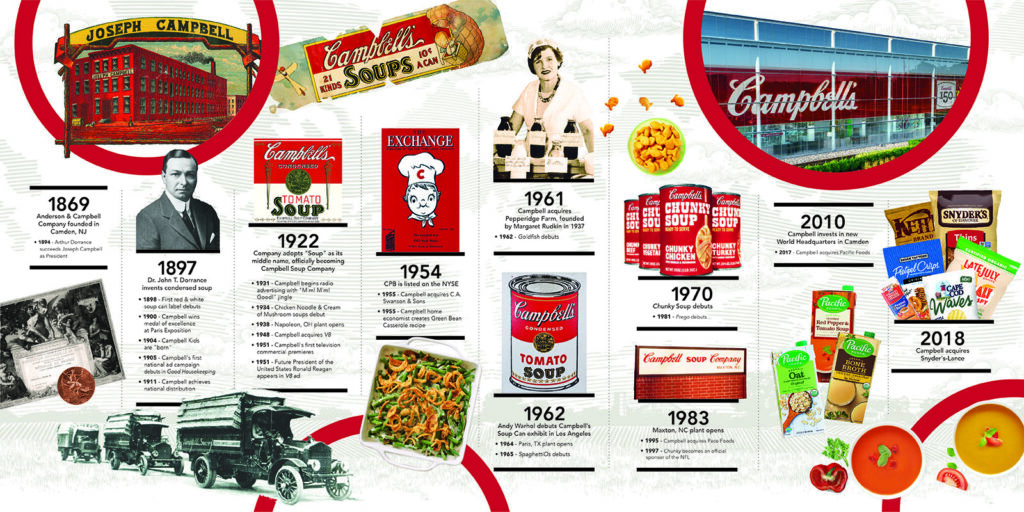 Campbell Soup Company was born 150 years ago from a simple idea—to make delicious and affordable food accessible to all. For generations, Campbell has made authentic, flavorful and readily available foods and beverages that connect people to each other, to warm memories, and to what’s important today.

Founded four years after the Civil War ended, in 1869, by a fruit merchant and an icebox manufacturer, Campbell then as now is based in Camden, New Jersey. By the turn of the century, Campbell flourished thanks to several innovations, including Dr. John T. Dorrance’s invention of condensed soup, which made nutritious and delicious soup accessible to millions of Americans.

Campbell’s influence can be seen in American pop culture throughout the years, from Andy Warhol’s iconic paintings of Campbell’s Soup cans to the enduring “M’m! M’m! Good!” jingle to other cultural icons like the Campbell Kids and President Ronald Reagan’s V8 ad.

Over the years, the company has grown to include numerous other brands that are staples in American households, including Pepperidge Farm cookies, Goldfish crackers, Snyder’s of Hanover pretzels, Lance sandwich crackers, V8 beverages, and Swanson broths.

Today, Campbell is an $8.1 billion company with more than 19,000 employees. Campbell is the third largest snacking company in the U.S. and its products can be found in more than 95 percent of American homes.