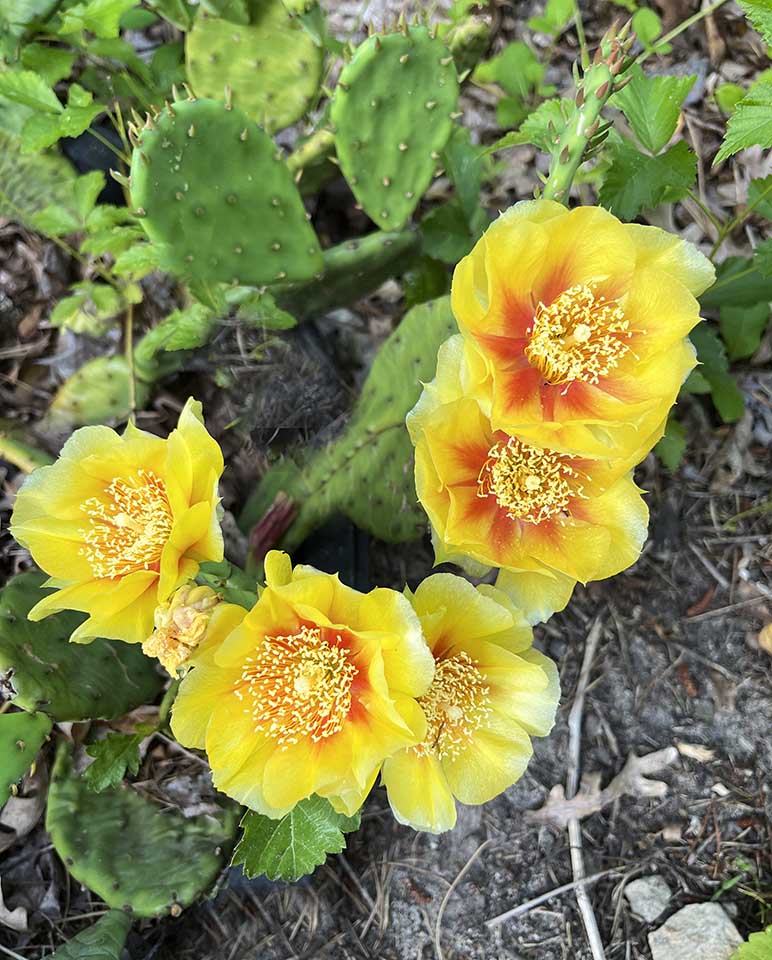 In life we often have love/hate relationships with things or people. Don’t most of us have a friend we adore—who also drives us a little crazy? Or a thing we can’t live with, yet can’t live without? There’s a plant in my yard that evokes in me that approach-avoidance response—prickly pear, New Jersey’s only native cactus. The attraction is obvious this time of year when from June to July it is in bloom. This plant, Opuntia humifusa, produces beautiful yellow flowers along the leathery margins of its stem. East of the Appalachian Mountains the center of the yellow flower can be a reddish orange.

The stems are flat teardrop- or oval-shaped pads that vary in their posture from erect to a flattened state of repose. They look dotted but upon close inspection these dots, or areoles, are surrounded by glochid (plural is glochidia) or the small barbed hairs. Often a prominent spine protrudes from the center of these clusters and is obvious. These spines are actually highly modified leaves.

There is nothing like a glochid in your finger. Often you neither see nor feel it—that is, until you’ve been rubbed the wrong way. Then it dashes your dexterity as you pull away from your task with a spastic jolt, as if you have been jabbed by a fine needle. Gosh knows a fist full of glochidia will drive you batty. These spines armor and protect the cactus from animals. In some cacti they are also poisonous.

The main body or stem of the plant has a green, waxy-looking surface. This helps it retain moisture and is part of what makes it a succulent. The water stored in the stem does not freeze because the plant has chemicals in its cells that allow it to survive in winter temperatures. Its geographic range includes most of the United States from Montana to Texas and eastward; it even extends north into Ontario, Canada. U.S. Forest Service botanist David Taylor notes that prickly pear is in the Opuntia genus, of which there are about 150 species. Opuntia has the largest range of cactus in the United States.

People have often survived in deserts by harvesting the moisture from cactus. In fact, people also eat cactus, and in the Mexican culture it is a common staple. Prickly pear is edible—its fruit, its flowers, and the pads.

Jim Meuninck, author of Medicinal Plants of North America, discusses his preparation of prickly pear. The pads of new growth are thrown on coals such that the spines and glochidia are burned off and the interior cooks. Then the waxy skin can be peeled away giving access to the interior. Meuninck takes the “meat” and makes it into a stir fry. He also suggests huevos rancheros with cactus, yucca, and salsa verde.

In addition the pads can be fermented with sugar, water, and yeast for an alcoholic beverage (Meuninck).

Many sources discuss prickly pear’s medicinal uses. The pads have long been utilized as a chemotactic attractant that draws serum from wounds. Chemotactic describes the movement of an organism or cell in relationship to chemical agents; the flesh of the cactus is used to pull bacteria from a wound, clean, and seal it. The flowers are also an astringent (Meuninck).

Traditional medicine used the flowers in a tea for stomach ailments, diarrhea, and irritable bowel syndrome. Ash from the stem is applied to burns and cuts. Pima Indians used the flesh on wounds to induce lactation (Meuninck).

As noted, the fruit can be peeled, sliced, and eaten. According to Meuninck the fruit “contains 24 betalains which are potent anti-inflammatory agents.” Foster and Duke talk about American Indians using the pads to make a poultice to soothe rheumatism. They corroborate Meuninck’s data and discuss other folk uses as well; the juices of the fruit were used on warts, and pad tea was prized for lung ailments.

In a very limited review of pharmaceutical articles I found that biologists have conducted studies on the properties of various Opuntia humifusa, investigating its potential for skin care (Park, Choi, Hong Et al). They concluded that cactus extracts protected the skin of hairless mice from sunburn-producing rays.

A number of abstracts from Asian Pacific journals talked about its properties in the prevention of skin cancer. I discovered that Korean scientists were looking at many medicinal possibilities—treatments for cervical carcinoma and sun-induced skin cancers, its anti-inflammatory properties, insulin sensitivity, antioxidant activity, antimicrobial effects against food-borne pathogens, treatment of irritable bowel syndrome and more.

The Korean pharmaceutical community seems to have done endless investigations into the traditional uses by native peoples, looking at the molecular structure and possible future medical uses.

With all its virtues, you still might want to think twice about introducing it to your property. It can be aggressive and spread over a wide area. It is not friendly underfoot and you surely don’t want to fall or kneel on it. Some people put it in a raised container and remove any volunteers that might escape their intended isolation.

Each winter the plant shrivels and falls flat to the ground where it lies dormant. Then in the spring it plumps to life. Our stand has stayed somewhat confined and each June and July I marvel at its lovely flowers. My limited fascination with the beauty of the plant seems so superficial in comparison to the extensive studies and folk uses that I discovered.

But there is some truth in the adage “Ignorance is bliss.” So I continue, in the moment, to simply enjoy its blooms.