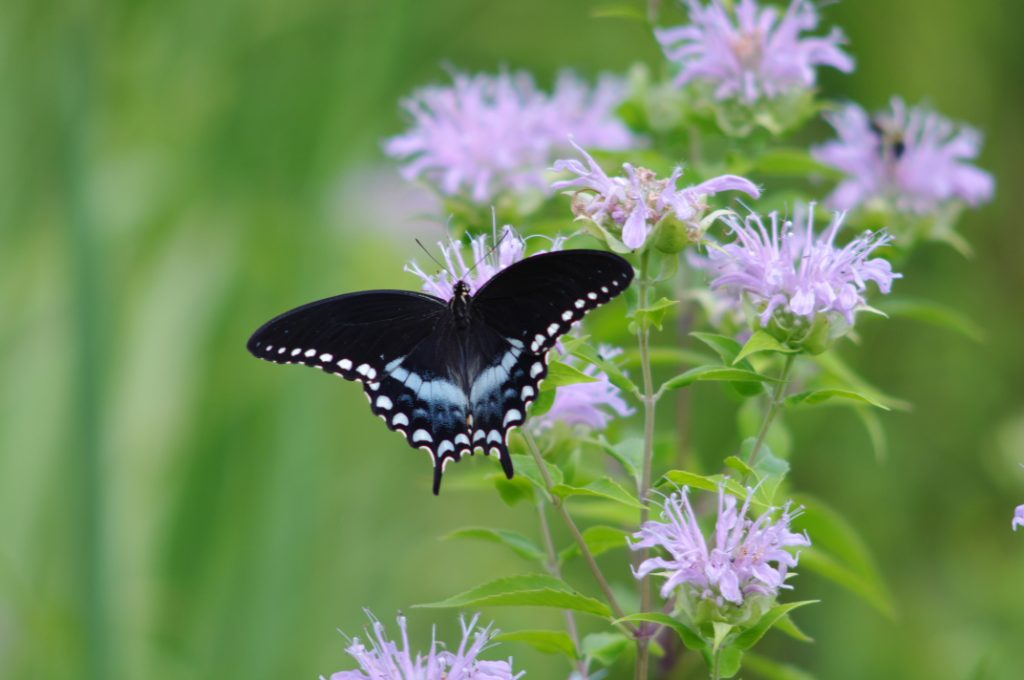 Insects have evolved over millions of years to be specialists in their chosen habitats. Butterflies are an excellent example of this evolutionary adaptation. The larval stage (caterpillar) of each species of butterfly has a host plant—a specific plant that its young requires for nourishment.

Like all cyclical stories it’s a bit like asking what comes first, the chicken or the egg. So we will start with the adult butterfly. First the male finds a mate, likely by detecting pheromones, a chemical substance released by the female that the male can sense. After mating the female deposits her eggs on a host plant specific to the species.

Most butterflies have a number of host plants but the selection is small. Host plants should not be confused with a nectar source like flowers. Adults find and feed on nectar less discriminately, but when their eggs hatch the larvae need to eat the leaves of a specific plant with which the species has evolved and that its survival depends upon. Insects have tolerances only for these particular plants.

Once the caterpillar is fully grown it will construct a chrysalis or cocoon to protect it in its pupal stage. A cocoon is spun from a silky excreted substance; a chrysalis is a molt. From there it will transform into a butterfly. When it emerges its metamorphosis from egg to butterfly is complete, and the lifecycle repeats. Butterflies feed on nectar, mate, lay eggs; the larvae hatch, eat flora, grow into caterpillars, make cocoons, grow, and over time emerge as butterflies.

This miracle is the basis of one of our most popular children’s books, a top seller for more than half a century: The Hungry Caterpillar, by Eric Carle. Most youngsters know the final pages by heart, when the former caterpillar makes its final transformation: “He was a beautiful butterfly.” This metamorphosis has captivated mankind since humans were capable of recognizing it.

By way of example, let’s look at the time span during which the spicebush butterfly passes through each of its life stages. For four to 10 days, depending upon temperatures, an egg sets on its host plant, and then it spends three to four weeks as a larva. Afterwards, it will be in its pupal stage for 10 to 20 days, with the exception of overwintering pupae. As the magnificent adult it will live for some six to 14 days. A butterfly only spends a week or two as an adult—about 19 percent of its total lifecycle.

The butterfly stage, however, is the one most appreciated by most of us. Many people have a Dr. Jekyll/Mr. Hyde approach to butterflies based on its lifecycle stages. As Jekyll they are awed by the butterfly, but Hyde wants to bomb any caterpillar that eats leaves in his precious lollipop-tree garden. (Oh, that was harsh, but possibly not harsh enough!) In an effort to keep the plants from being eaten, people commonly purchase exotic varieties for which our native wildlife has no appetite. This may seem like a good strategy except that it provides no food for our caterpillars, and remember what Jekyll is awed by—butterflies. The exotics also provide no food for our birds that need caterpillars for their young. If you grow only exotic trees in your yard they may as well be artificial. As for the lawn—you might simply spread concrete in terms of its wildlife value.

Birds can take care of creepy-crawlies, rather than your using pesticide bombs that destroy intended and unintended targets. A bluebird needs access to about two acres of habitat to provide enough insects for its young, and there must be native plants that support those insects. That is why at CU Maurice River we encourage people to plant native flora in their yards. It is important to recognize that we are collectively responsible for providing habitat if we want to see both ourselves and nature survive.

Christina Milesi, a NASA biologist specializing in ecosystems, estimates that Americans have planted 32 to 40 million acres of sterile lawn, an area eight times the size of New Jersey (Milesi 2005/Tallamy). Sadly, the care of lawns is now directly enmeshed in our economy, with $30 billion a year spent on these pretty green wastelands (Steve Curwood/Rangan interview NPR “Living on Earth,” 2006). Most of the products applied to them adversely affect our water supply. Furthermore, mowing your lawn for one hour produces as much carbon dioxide as driving a car 650 miles, and an estimated 800 million gallons of gas is used each year on lawn care (Hannah Holmes, Suburban Safari 2006).

Let me provide you with yet another reason to plant natives. Many exotics end up as invasives, especially since they have no natural controls to keep them in check. For fun, or rather horror, google “kudzu,” a plant brought from Japan in 1876 and introduced at a world exposition in Philadelphia. It was touted for providing cattle feed, lovely flowers, erosion control, and gosh knows what else. It now covers more than 7 million acres in the United States and has caused hundreds of millions of dollars in damage, pulling down telephone poles and buildings. Here is the real deal: No one knows which plant will become the next kudzu, although there are a number of close contenders already.

Do I have lawn? Yes, but always less. We keep expanding our native patches every year. Do I have exotics in my yard? Yes, and I live with those mistakes—pachysandra and periwinkle, “Oh my!” We continually strive to do better. Naturalist and author Pat Sutton encourages you to devote just 10 percent of your yard to natives. That Pat is sneaky, in a good way. She knows that once you have restored 10 percent to natives and you see the dramatic change in your property, you will be well on your way to converting all you can. Go to Pat’s website to get lots of useful advice on transforming your site, with lists of native plants, where to get them, and more: patsuttonwildlifegarden.com. You’ll be glad you did!