An Atlantic City High junior in 1969, Alisa Cooper had an hour-long interview with John and Yoko. 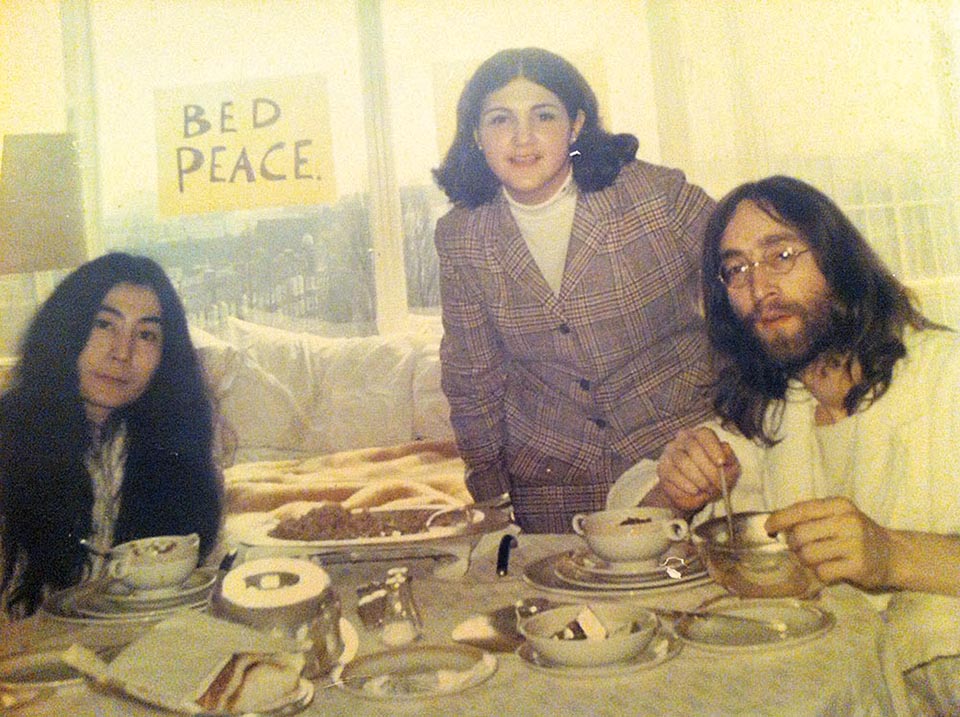 As a junior at Atlantic City High School waiting for the elevator to reach the ninth floor of the Amsterdam Hilton where she would interview John Lennon and Yoko Ono in March 1969, Alisa Cooper was, in her own words, “a nervous wreck.”

Recounting her experience nearly 51 years ago, Cooper, vice chair of the New Jersey Casino Control Commission, reports that her fears were allayed upon entering Room 902, the 540-square-foot Presidential Suite that served as the couple’s headquarters in late March where they met daily with media representatives between 9 a.m. and 9 p.m. to promote world peace.

“They couldn’t have been any nicer,” she said of John and Yoko.

In retrospect, Cooper sees her age as the factor that separated her from the typical reporters meeting with the couple that week. “I was 16 at the time,” she explained. “If I had been five or six or seven years older, I’m guessing they would have said, ‘Okay, another reporter, another traditional [set of] questions.’ You could tell I was in high school…They got a kick out of the fact that I was 16. This was something different for them, too.”

The Lennons had set up court in the seven-year-old hotel on March 25, inviting the media to visit and interview them while they sat in bed so they could promote peace. Jon Wiener, in his book Come Together: John Lennon in His Time, called the bed-in “a bold effort to break out of the insularity of the old peace movement. It was based on a commitment to reach a new audience with radical politics, and it expressed a seriousness in grappling with new cultural forms which powerfully affected popular thinking.”

Cooper says she asked a variety of questions, but John and Yoko asked their own throughout the interview. They inquired about her radio show and Cooper admitted it was a weekly wrap-up of high school news. “They were enjoying it,” she said.

When the subject of Atlantic City came up, Cooper says, Lennon reminisced about playing there with the Beatles at Convention Hall five years earlier in 1964.

Cooper refers to the interview as “a very casual, informal conversation with two of the most famous people in the world,” surrounded by posters proclaiming “I Love Yoko,” “Stay in Bed,” Grow Your Hair” “Bed Peace” and “I Love John” adorning the walls of the suite.

This casual exchange included discussions of Yoko’s art, the Yellow Submarine film and plans for future albums. At one point, Cooper asked why the couple chose to spend their honeymoon in bed for a week. “John goes on to say they wanted to spend their honeymoon with each other in bed, not on a yacht in the Caribbean,” she recalled. “He was very funny—he said they wanted to stay in bed and grow their hair until it gets long or until it gets itchy.”

When Cooper posed a question about whether or not the Beatles were planning to do any more movies, she was told they were. No specifics were given, but Cooper explains the group “wanted to do more movies, however, [there was the] difficulty of arranging a movie with all the different schedules.”

“In the middle of the interview,” Cooper revealed, “their lunch came up and they were having vegetables and rice.” As she sat with them, what was expected to be a 10-minute interview was running much longer. “I wound up being there close to an hour,” she said.

The interview with the Lennons allowed Cooper to return to Atlantic City as somewhat of a celebrity. The Atlantic City Press wrote an article about her accomplishment and her interview aired on her weekly radio spot.

Cooper explains that during the summer of 1969, “people were still coming up to me.” In September, she says, she was “still on cloud nine” when the Beatles’ Abbey Road was released. What was it like listening to a new album by the group after interviewing one of its members six months earlier? “There was still an excitement of meeting John and Yoko and an excitement of a new Beatles album. There was a certain ‘wow’ factor maybe to it all.” n

Next Week: The Legacy