Viewing of the shorebird migration or their feeding on horseshoe crab eggs should be confined to observation areas and distances where flock behavior is unchanged—hundreds of feet away. 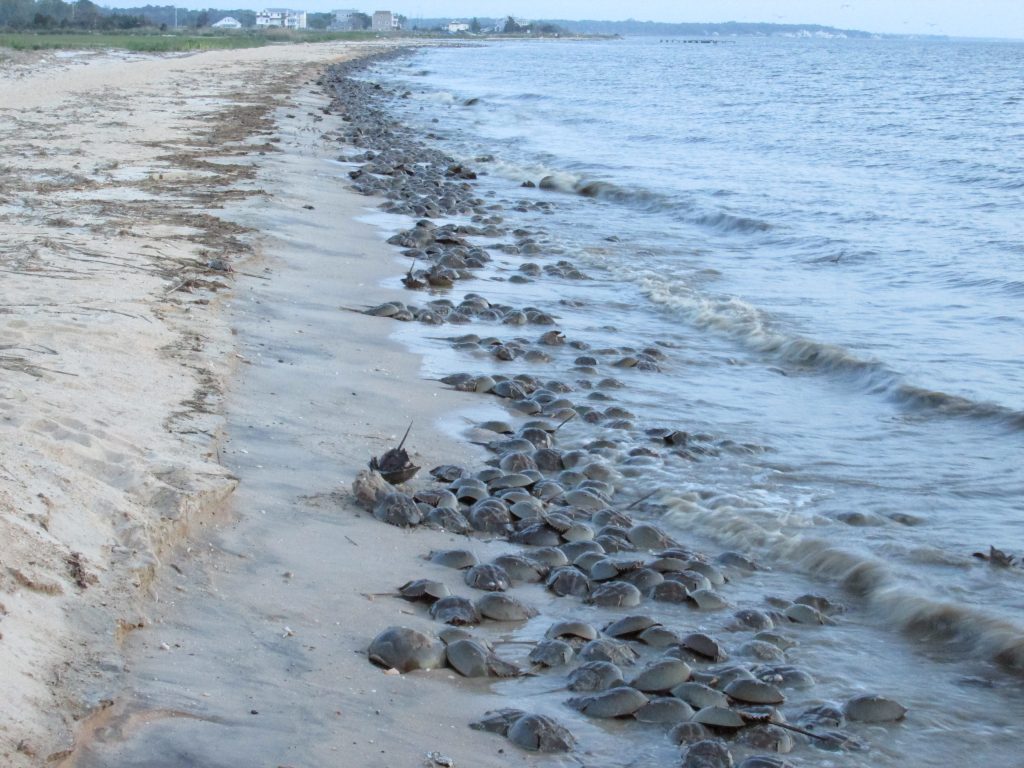 During the month of May, our region is host to a group of birds that make the most spectacular of all long-distance migrations of any in our hemisphere. Some start in the southern hemisphere as far south as Tierra Del Fuego’s wintering grounds and end on their Arctic breeding grounds. These are the famed “shorebirds”—or as some other countries refer to them, the waders. Many of these species will make a 15,000-mile round trip, with some knots even flying 8,000 miles non-stop, reaching speeds of nearly 50 mph. One famed red knot is the subject of a children’s book called Moonbird; tagged B9, this bird has flown as far as the distance to the moon.

What strategy is in play that would cause these tiny navigators to make such perilous journeys? And why are our Delaware Bay shorebird beaches so important to their voyage? Shorebirds winter in the Western Southern Hemisphere where the seasons are the opposite of the Western Northern Hemisphere. Their journey to Arctic breeding grounds is timed to coincide with the massive insect hatches on the tundra. There they are no longer in large dense groups, but rather dispersed, with nests camouflaged by the pebbly surfaces and low vegetation.

At Delaware Bay beaches, from Fortescue to the Villas, the horseshoe crabs are spawning in May. Delaware Bay has the largest concentration of spawning horseshoe crabs along the Atlantic coast. Horseshoe crab females dig in the sands and lay their eggs in a clutch. Shorebirds rely upon there being a superabundance of horseshoe crabs; female crabs will unearth another’s previously-laid clutch when laying their own, thus exposing eggs to the surface where shorebirds can gobble them up. Only the ruddy turnstones actually dig into the horseshoe crab nests, and most cannot dig deep enough to expose the eggs. Actually, many horseshoe crab clutches are dispersed in the surf because the females lay too close to the tide line, or their nests are too shallow. Heavy storm winds dislodge the eggs that then roll in the surf.

Horseshoe crab eggs are rich in fats, the fuel necessary to power shorebirds onward to the Arctic. Some of these tiny shorebirds arrive on the Delaware Bayshore having expended all their fat reserves, and need to double their weight in just two weeks to accomplish the second leg of their trip to Canada’s tundra. Thousands of shorebirds will soon be on the beach competing for this bounty.

The majority of the shorebirds will make their exodus northward by the third week of May. Wind, moon, and tide all play a role in the horseshoe crab/shorebird interactions. By early June the beach is again quiet.

The numbers of all the migrant species of shorebirds stopping over at Delaware Bay have plummeted, representing the greatest reduction in shorebird populations anywhere in the world. Biologists from around the globe study the shorebirds to define factors related to their decline and recovery.

In the 1990s a drastic drop in shorebird numbers was triggered by massive overharvest of horseshoe crabs for use as conch/whelk bait, such that many species of these birds were imperiled. In fact, the red knot is now listed as federally endangered (isn’t it threatened??), and the fate of many others teeters in a precarious balance favoring extinction. The conservation community was able to advocate for a moratorium on crab harvest in New Jersey but not all states followed suit.

Furthermore, horseshoe crabs are also harvested to draw their blood, which is used to test for impurities in everything that is implanted or injected into the human body, including crucial vaccines. The horseshoe crab is responsible for more medical discoveries than any living creature and saves lives every day. Only in the last couple of years has a substitute been developed that is beginning to be implemented. Almost every human on earth owes his life to the unique qualities of a horseshoe crab’s blood. Although crabs are returned to the bay after the blood is drawn, there is mortality. In addition, return is not usually to the same location from which they were taken.

Other factors influence shorebird survival and breeding success as well. Beach suitability is important. The crabs use sandy soils for spawning, so that if beaches erode into the mudflats or hardwood swamp behind them, there will not be enough suitable habitat. No crab spawning, no eggs, no excess eggs, no fuel, no migration, no known nesting, no chicks, no birds. Shorebird populations will continue to plummet.

Conservation groups have been restoring beaches on the bayfront along what the Bayshore Heritage Byway dubbed “Shorebird Alley.” Like all beach restorations, there are continual challenges in the form of storms, winds, currents, and other erosive factors.

Scientists have documented that human activities interrupt shorebirds’ feeding, which can consequently inhibit their gaining the necessary weight to successfully fly to the Arctic, and arrive to nest when there are insect hatches. Restrictions of human activity have to be implemented to reduce disruptions.

In May much of “Shorebird Alley” is closed to walkers, dogs, banner planes, kites, drones, and the like. Flushing birds means interrupting meals, as well as resulting in their using up vital energy reserves. Stewards, docents, and conservation officers all try to monitor, educate, and enforce protective measures. If you go to see the migration, the most important thing you can do is to confine your viewing to observation areas and keep to distances where flock behavior is unchanged—hundreds of feet away. The more disruptions, the less time the shorebirds have to feed.

The International Shorebird Recovery Team employs many techniques to help inform conservation measures for today and the future. COVID distancing is placing many challenges on this year’s tasks and most international team members have been unable to come because of travel restrictions. Indeed, we all worry about the dedicated researchers, some of whom are especially vulnerable.

Specific methods are used for assessing whether shorebird populations are in recovery or decline. Counting is the most obvious technique, both from the ground and from the air. Determining the peak of shorebird migration in Delaware Bay is one key to timing the count, which takes place in both New Jersey and Delaware.

In addition, birds are carefully netted for banding, marking, data collection and release. Banded individuals are logged and untagged birds are flagged and banded for future identification. Leg flags can be read using scopes, while observers sit alone, isolated, on the sand dunes. Additional data collected includes species of shorebird, weight, bill length, and feather samples, along with any banding details.

Some birds have geolocators affixed to their leg; this is a relatively new technology. Every place on the planet has a sunrise and sunset specific to that locale. The logger is light sensitive and records this information, allowing the compilation of locations traveled by any individual bird. If a geolocator bird is recaptured, the device is exchanged for a new logger, and the stored data is uploaded to a computer that helps extrapolate global positions for each day. It is always a gamble whether the bird will be recaptured in a subsequent year; scientists seek birds outfitted with geolocators like prospectors look for gold. To hold a red knot that has travelled all the way north to breed, then migrated all the way to Tierra del Fuego to spend the winter, and then migrated back to Delaware Bay is an incredible thrill, as well as helping scientists identify new wintering and stopover grounds.

As part of the scientists’ research, horseshoe crab egg densities are also recorded, using random sampling grids in an effort to check out egg availability to shorebirds and to evaluate the crabs’ spawning success. This information helps managers determine population levels of spawning crabs as well as providing an indicator of egg availability for foraging shorebirds.

The Delaware Bay team does its work in the Southern Hemisphere as well, sometimes literally travelling with the birds. Some international members of the team do their work in the Eastern Northern and Southern Hemispheres in the African/European and Asian flyways. For all shorebird scientists, it is a labor of intellect and of love. When the spring breezes begin to blow across Delaware Bay, the shorebird scientists are unable to resist the calling, and they too gather along the bay to study them, hoping in the end to contribute to the recovery efforts for all the shorebirds, including the red knot.