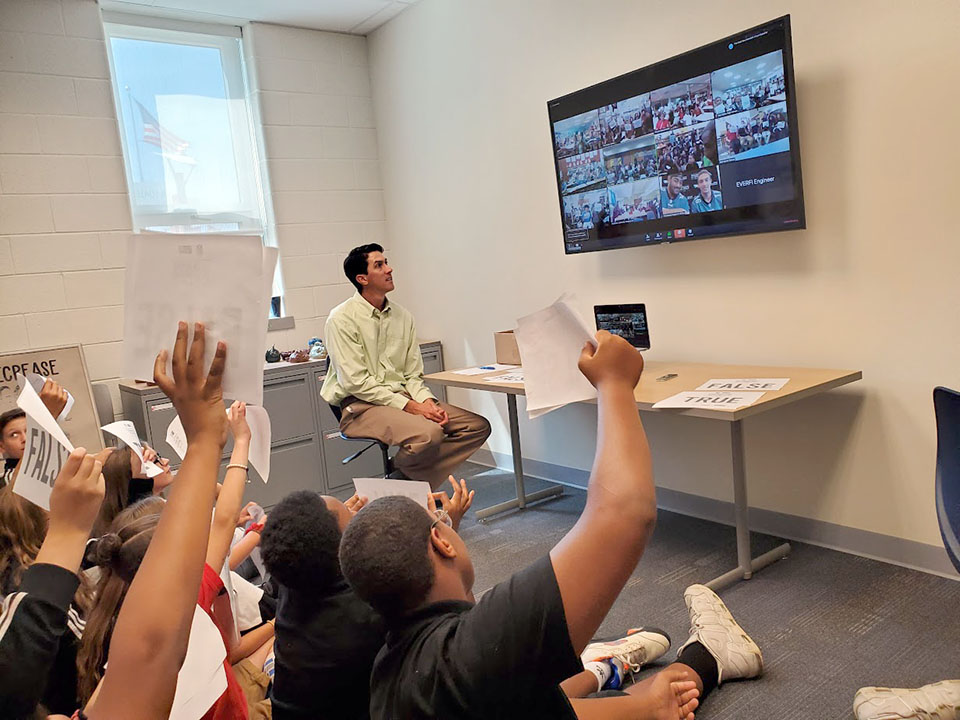 Two Vineland middle schools are starting the school year with a purpose by participating in the Character Playbook Challenge, sponsored by the National Football League and United Way.

Veterans Memorial Middle School, participating for the second straight year, and Sgt. Dominick Pilla Middle School were both on hand, along with eight other schools in the region, on Monday to take part in a live video chat with Philadelphia Eagles Mack Hollins and Jordan Mailata. The players spoke to the students about good character and how to handle themselves in tough situations, reminding them that character “is doing the right thing when no one is watching.” Between rounds of cheers and the waving of rally towels, they also asked the students a series of true and false questions, prompting the students to hold up “true” or “false” signs in reply.

Each school also had a chance to ask the players a question. Eighth-grader Jayden Delvecchio was front and center when it was Veterans Memorial’s turn, asking the players what their go-to method was to resolve conflict. Hollins and Mailata offered suggestions, including remaining calm and not letting anger take over. At Sgt. Pilla School, seventh-graders Angela Kaskabas and Mia Morvay asked the players for advice on how to stay confident in yourself.

“It was a great opportunity for our students to hear positive messages and ways to make a difference not just in school, but in the community, as well,” said Ryan Suppi, Pilla School counselor.

This is the third year that the United Way and NFL have partnered for the program. Since 2016, Character Playbook has reached almost 500,000 students in over 5,000 schools. Character Playbook teaches students, teachers, and districts real world skills about healthy relationships, conflict resolution and managing emotions.

“I really like having these professional athletes talk to the students because they’re at the top of their game,” said Jack Martine, STEAM teacher at Veterans Memorial. “They were once in the same place as these kids and I think it helps to hear how they achieved their goals.”

Each year the program focuses on a different character challenge. This year the challenge is to complete 100 minutes of volunteer service to either a school or the community. Veterans Memorial has taken it a step further, partnering with the school’s safety patrol to volunteer 100 minutes every Friday to make sandwiches for the local soup kitchen. Pilla School has several different community service projects coming up, according to Suppi.

This year, the school climate theme is “Hero Up” and encourages students to become heroes. There will be a Divide and Conquer tournament where students will donate funds to participate and learn about military heroes, with the proceeds benefitting the Wounded Warrior Project. Several fundraisers and donation drives will follow, including a Thanksgiving Food Drive and Toys for Tots campaign. There will also be a Holiday Help Initiative geared towards helping families in the school.