Upstairs, downstairs, inside and out, Bogart’s Bookstore & Cafe is a real gem. 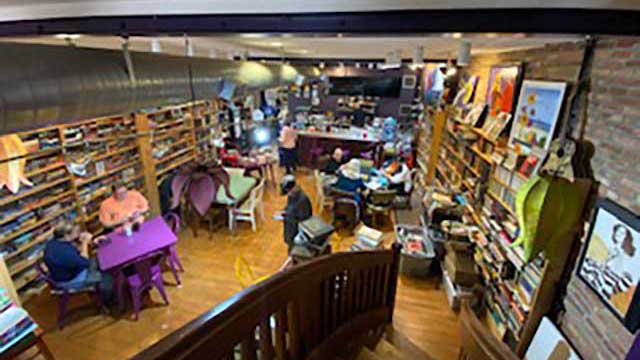 Though I’m a book lover and coffee enthusiast, it is neither pleasure alone that draws me to Bogart’s Bookstore & Cafe. I relish the chance to browse and buy books, to sip freshly made coffee, and enjoy a delicious sandwich or scone, but it is ultimately the warm sense of community that Bogart’s offers that makes me a frequent visitor. It even starts outside the store.

“It’s more than just books, you find pieces of yourself there,” says Keegan Smith, artist and art teacher who’s set up outside, painting a canvas of the well-known High Street storefront with its purple awnings. She picked Bogart’s for the Renaissance Center for the Arts’ plein air event. (Artists are painting outside for a one-day event.) “I discovered them on a Third Friday two or three months ago,”she adds Keegan, who has been living abroad and elsewhere in the States, recently returned and finds Bogart’s a local treasure.

Inside at a round table the weekly knitting and crocheting group takes a break from the needlework to enjoy coffee and muffins. Ellen Beth Nappen, an artist who has several of her paintings on display at the store, says they have been meeting for years. The group is called “Ripping a Yarn,” a play on words; as they knit or crochet, they also share stories. Nappen, as she crochets a fringe shawl, raves about the shop’s signature Bacon, Brie and Blackberry grilled cheese. “My father used to make grilled cheese with jelly,” she recalls.

Upstairs, Levi Roman, who says he is nine and a half, is no stranger to Bogart’s. He brought along Peyton Hundt, 11, a first-time visitor. After buying books and treats, they are heading to The Levoy Theatre down the street to see a magic show.

At the counter, I talk with a schoolteacher about her recent trip to Italy. I was in Rome and Athens in May. She and I swap travel stories as owner Richard Ford pours me a cup of coffee. One of the great delights is being able to drink it in a mug.

Bogart’s has hit some rough waters financially, and it needs customers to support it. Ford recently put out a Go Fund Me for $15,000 to turn things around. He’s raised just over $11,000 so far and it’s giving him just a little breathing room.

“I’m the fourth owner,” he says. “The store’s been around for 46 years.” Ford bought the store in May 2019. “After buying it, I had just enough to get through getting equipment to have a small kitchen and what I needed,” he says. “I had $500 left to my name. Anyone who’s opened a small business knows.”

Ford had less than a year before COVID hit, bringing unprecedented times for businesses all over, especially small downtown businesses.

“Most of the groups have not returned,” he says. “Book clubs have not come back; they are just not getting together. Recovery groups used to come in once a month. A CASA group used to come. I also lost regulars. Some died. Some are not coming back. People have changed their habits.”

It also hurts that several nearby stores and restaurants have closed or moved.Frank’s Tattoo, for one, has left the street. “He used to come every day for breakfast,” Ford says. “Three to four times a week, groups would come over. They would have waiting time and head over to the store.” On the recent Third Friday, he did not have the same foot traffic as usual.

For Ford, the key is selling books. “Books really make it sing,” he says. “I need people to swap books, bring books and buy books.”

He explains how it works at its simplest: “Books are 50 percent off. If you trade books, you get 75 percent off the regular price.”

It’s a great deal on a wide range of books, from romance to mystery, bestsellers to biographies. The kids’ section is well-stocked as well. Coming up to the counter to pay up, David and Deborah Laird are regulars who enjoy using their trade-in credit, which she calls her Bogart’s Bucks.

“I had the fig salad. It was fantastic,” she beams. “My husband had the bacon grilled cheese. Our dog is also named Bogart. We love Bogart’s.” When shopping for books, David says he leans toward “anything history, from historic novels to almost college level.” Lately he’s enjoying books on the Civil War.

As for this writer, I can say that Bogart’s connects me to others—and to my past. For years I have been bringing kids and visitors to Bogart’s. I look through the sketchbook, where those who have journeyed here leave little notes or sketches. I find one that my college-age daughter Emily sketched years ago.

On our next phone call, Emily volunteers, “When I’m away from home, Bogart’s is one of the places I’m most excited to return to. When friends visit, I bring them there. It’s cozy, has that old book smell, and the best grilled cheese I’ve ever had. I used to have to climb up on the stools at the old location, just to reach the counter and my lemonade. This summer, as I sat and worked remotely for my college internship, I thought about how a lot has changed in that time, but Bogart’s has always had such a special place in my heart.”

For our family, Bogart’s impact has been multi-generational. My dad especially loved getting poetry and history books here. He died a few years ago, but visiting Bogart’s reminds me of him and I cherish the afternoons we shared here. He used to give Ernie, the accordion player, unsolicited requests—even when he couldn’t quite come up with the song title. He’d whistle a little or give a vague reference. Ernie would nod his head, “Waltzing Matilda?” and then jump right in with a lively rendition. My dad would tap his foot and whistle along. We’d then get lost in the stacks, returning to the table with treasures we’d found in the massive collection.

Bogart’s is a place that lends itself to leaning in, to community gathering. It’s the books and the coffee and the good food. It’s the inviting atmosphere and the art. It’s Richard Ford at the helm, working hard to keep the ship afloat. I’m inspired to tell locals and visitors alike to head on over to Bogart’s to help him get to smoother waters.