Sons and daughters share how their fathers shaped their lives. 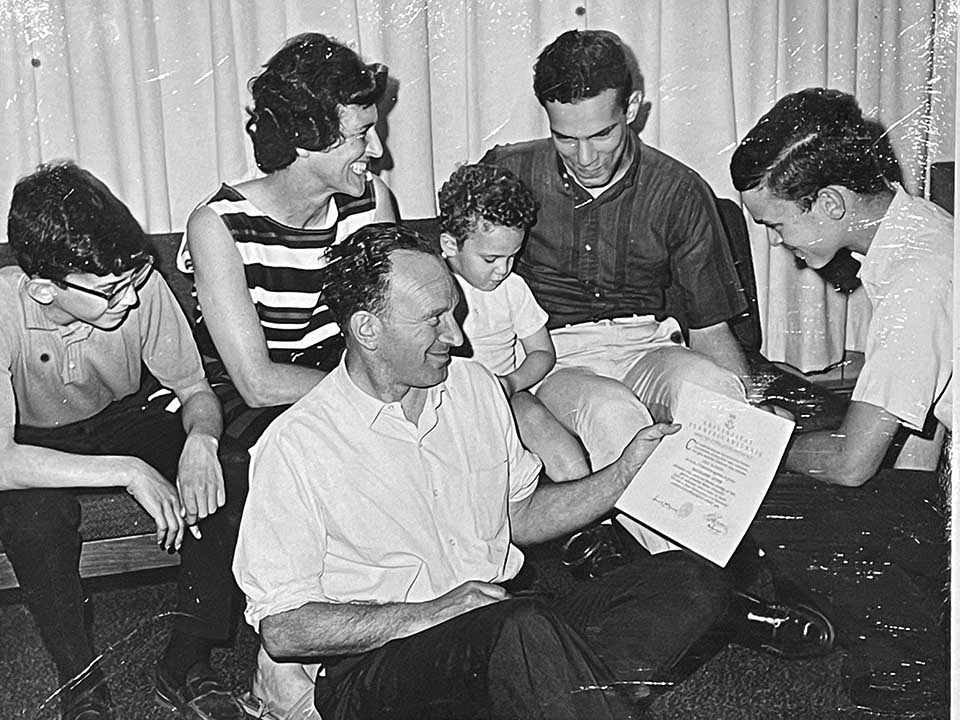 Fred Manders, front, proudly shows his first master’s degree, from University of Pennsylvania in mechanical engineering, to his family, from left: Robbie, Ilse, Steven, Michael, and David. (May 1966)
by Stephanie Farrell

My dad picked me up at the end of my freshman year of college with a U-Haul truck and plans for a circuitous trip home. Exhausted from exams and with my worldly possessions in tow, I was unenthusiastic. Dad, a Civil War buff and family genealogist, drove us first to Antietam National Battlefield. Rows of white crosses stretching to the horizon humbled me; how could I consider it an inconvenience to honor the human toll of this bloody battle? His next stop was Keyser, West Virginia—a town that shares our surname. My sister and I dutifully posed for photos in front of Keyser signs, but our research into familial connections turned up bupkis. I still am grateful for the trip. —SF

“He was very driven in whatever he did,” says David Manders of his dad, Fred Manders. “He was driven when it came to education. He earned five master’s degrees: Mechanical Engineering, Physics, Fine Art, Art Therapy and Psychology.”

Fred’s father, who had lived through the Holocaust, told him that education was the only thing nobody could take from you. “My grandparents came to Vineland in the late ’30s and started a chicken farm,” he explains. “You didn’t need a lot of money to do it and all their money was left in Germany.”

When his grandfather got sick, his dad had to come home from college to run the farm. “He was basically a farmer, but not out of choice,” Manders continues. “He went to University of Pennsylvania at night. He would be up studying until 3 o’clock in the morning. I’d come down and find my father asleep at the kitchen table with his head down on an open book. My whole life my father was in school, just because he wanted to further his knowledge.”

Manders says his dad was driven when it came to the value of work. “He changed careers several times,” he recalls. “I think he felt that he got as far as he could in that job or his interests changed.”

With his first degree, Fred had more opportunity. He worked for Owens Illinois and later went on to work at the Cumberland County Guidance Center, which led to his interest in art therapy and psychology.

“He was always an artist, always studying art,” he adds. He made pottery, painted, made woodcuts. But Manders, who is a Vineland architect, says his dad did not push him in a particular direction: “He pushed all four of us boys—whatever you do, do it the best you possibly can.”

He misses him every day. “I constantly find myself in situations and think, what would my dad do?”

Dad was a Western man, growing up in Utah and enjoying summers on a ranch in Idaho. He would’ve been happy as a cowboy. He struggled with mental health. I am so grateful he got help and took his medication. It was a lifeline. —SF

“When I was a kid, he had a band and they’d come over every weekend,” she says. “When it was time for bed, we’d listen at the vent. They played all different kinds of music. The variety was incredible. Now we listen to all types of music.”

She sings a few lines from a favorite, “Please Come Home for Christmas.”

“Christmas Eve was always karaoke with his grandkids,” she recalls. “We have it all on video—his face as he sat with his whole family gathered around the table. Now there’s an empty chair.”

Puglia was good at sports and coached football and baseball. “He’d give kids rides, have them over to eat,” she says. “They were like part of the family. Even people I meet up with in their 40s tell me, ‘Your dad was the best coach ever.’ ”

“The one motto he always went by— ‘If you allow yourself to quit one thing, that will be a pattern in your life.’ ”

Coach Puglia said even the hardest thing, just get through it. He always had his players finish the season. “He’d say, ‘If you don’t like it, don’t do it again, but you don’t want to let the team down.’ ”

Puglia also loved to cook. “Man, he could cook! He’d barbecue like nobody’s business,” Val says. “My parents were all about making memories, enjoying life, family get-togethers. Although he was away for work a lot, he always made it back. He was just very present. The first family barbecue without him was so tough.”

He passed on his recipes to Val. She and her son Kevin Jr. really enjoy cooking.

Dad, a lover of literature, started writing in his 50s. He always wanted to know what I was writing. He thought I was exceptionally talented (oh, I cherish his parental bias) and that I needed to write a novel. Even as he urged, I knew he was proud of me. He was my Go-For-It parent. While my mom checked the budget or not so subtly wrung her hands, Dad was two-thumbs-up, petal-to-the-metal,” and “make-it-happen, Cap’n!” —SF

It’s been 10 years since Linda Drexel’s father, James D. Bracken, passed away. He founded Mission Teens in Norma in 1969, the year she was born. “It’s a Christian discipleship program to help people with life-controlling addictions,” says Drexel, who is a board member. “There are 20 centers all over the country. It is an eight-month free residential program.”

The center has helped thousands of people. “He was sold out for God,” she says. “If you trust God, this life is such an adventure.”

Some of the lessons she learned: “Believe that, with God’s help, you can do anything and that others can too,” she recalls. “My dad always told me I could do anything. If I was having trouble with something in school, he said everyone else was too. That gave me such freedom to keep trying.”

“You don’t have to be perfect—God can use you just as you are if you are willing. My dad had flaws,” Drexel says, “but he didn’t beat himself up or continually strive to perfect himself. He sought God with his whole heart, loved others as himself and was willing to step out in faith to do God’s will. How freeing it is to know we don’t have to wait until our lives are completely in order before we can serve God and others!”

“We’re going to die how we lived. This was the most amazing gift of all. Not only did my Dad teach me how to live, he taught me how to die,” she explains. “He had every right to go to bed, wallow in his suffering and wait for death. But he didn’t. Right up to the end he thought of others. When he found out that one of the centers had limited food, he made up a grocery list from his bed…and sent them $500 to shop. Every time I went to his house, he’d have me send books out to people. He was the real deal.”

Struggling with the loss of his grandfather, my son started a clothing brand named after him, Kemo; it was his nickname after Kemosabe from the TV series The Lone Ranger. Dad himself was quite a character. Someday I just might write that novel, Dad. —SF