and his brother Mick are proof that sometimes the misfits of the litter are the most beloved. Oh, and something about moles, too. 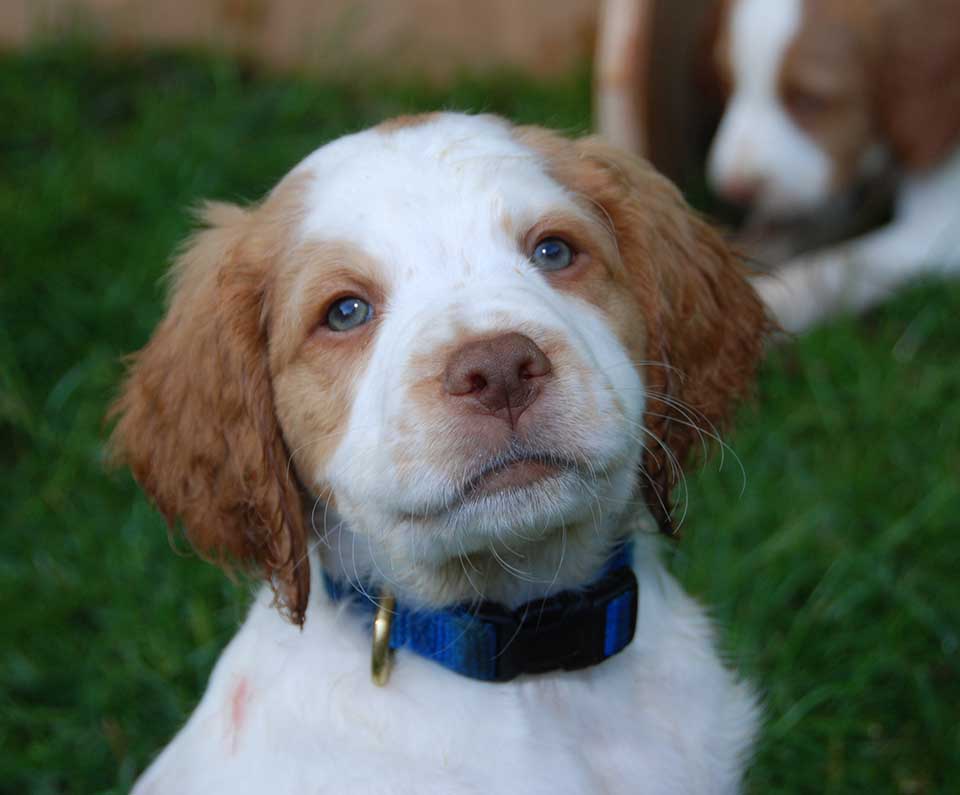 We’ve had a lot of dogs during our 40-plus years of marriage. Normally we have three Brittany spaniels. Their personalities have been as unique as their names: Cupcake, Binx, Cappuccino, Yankee, Ziggy, Jersey Mambo, Hobnob, Hey Mambo Italiano, and Smooch. When we bred Smooch the threesome turned to five. Smooch had nine babies and our plan to was keep one to replace Ziggy who was around 13 and looking like we were going to lose him at any moment. Hobnob was our only non-Brittany, a yellow Labrador who was about 11 and we were warned that Labs seldom live past nine. So we wanted a male puppy to replace Ziggy, he surely would pass any day.

Well, evidently neither Hobnob nor Ziggy ever got the memo and they lived for another three years. So if you’re doing the math we ended up with five dogs for a while. I carefully selected a puppy from Smooch’s litter, who we called Mick. He was patient, smart, and wise—an old soul. He was even obedient at six weeks. Meanwhile buyers came and went until there were just two males left. And it became apparent to me that one of them, “Blue Jeans,” was different. Really different, and I told my husband, “We can’t sell him.”

“Because it will be like ‘The Ransom of Red Chief,’ people will pay to have us take that puppy back. Besides look at those saucer eyes.”

Brittany spaniels point at a very young age but evidently no one told Blue that. He would only flash point. I knew it was going to be difficult selling a hunting dog that lacked that skill. Naturally this would become obvious in time and our buyers would want their money back, or worse, pass him on to who knows whom. Truth be told I was in love with the misfit and have been ever since.

Each of the puppies was named for the markings on its forehead. Mick had three spots that looked like Mickey Mouse. Blue Jeans was initially called Gene Kelly (of Singing in the Rain fame), because it looked like the spots had been rained on his head. When it became apparent that we weren’t selling him I didn’t like the name Gene; however my daughter did, so we compromised on “Blue Jeans.”

Blue’s nickname is Kramer because he never enters a room the same way twice, like the character Kramer on the old sitcom Seinfeld. Most of the time the look on his face suggests that he just got out of a dryer and he never laid eyes on you before.

People with indoor dogs often say, “Oh, they live outside?,” implying that they feel sorry for them. Well, I paid over $400 for a doghouse, and for years Blue would only sleep on top of it. So his choice is fully out-of-doors.

Blue is 12 years old now but he still acts like a puppy. He doesn’t hold his point long but he hunts near you and has the best nose of them all. He still has those saucer eyes and seems to see well but his hearing is amiss. Most days he insists on having dinner served on top of his doghouse. While he is a great bird hunter, in recent years he has taken an interest in another species, much to our dismay—eastern moles. And that is where our story takes a sharp turn into the natural world.

We let the dogs run in the morning, and in the time it takes us to fill three dog bowls and water buckets Blue can plow furrows like a John Deere all over the yard. Often in a very short time he can push up a mole track that is 10 feet long. Blue slides into the workshop with his face covered in dirt and gives his dizzy Kramer look as if to say, “Who, me? I wasn’t digging.”

But the dirt tells another story. Our yard is pretty neat and is the source of contention between my desire for more native plantings and my husband’s desire for the American manicured lawn. So you might say some of the mess Blue makes is batting more for my team than my husband’s. One time after sod was laid Blue and brother Mick collectively attacked it. I mean they went bat skat crazy with it. Go, team, go!

However, Blue isn’t a very good gardener either. In fact sometimes when I’ve had him loose as I plant flowers he is capable of unearthing them faster than I can put them in the ground. And if there is a container of four or six plants, that is an invitation for him to give them a four-legged sightseeing trip around our acreage, clenched in his teeth. And permit me say that any excavating damage that a mole can do, Blue can outdo—one might say literally making a mountain out of a mole hill.

So what’s all the fuss about moles anyway? Products of destruction and demise line the shelves at garden centers. Let’s explore Blue’s quarry, the eastern mole or Scalopus aquaticus, shall we? Scalopus comes from the two Greek words—skolops ‘mole’ derived from “to dig” and pous or ‘foot.’ And the latter part is the result of the first identified specimen being found in water, so its large webbed feet were assumed to be designed for paddling. Aquaticus derives from Latin “found in water,” a misnomer for sure.

Moles are terrestrial creatures designed for an underground lifestyle. Their eyes are sealed slits and can only sense light and dark. It is unknown whether their hidden ears can hear. They do have a superbly adapted sensory system that can sense the vibrations of even a worm. Their fleshy nose extends beyond their mouth and provides them with a sense of touch when moving forward. The nostrils are on the upper surface of the nose such that they are not being pushed into the soil. When backing up in its already-excavated tunnel the tail provides a sense of touch.

Their fur is short and thick, repels soil, and lies in no real direction, so that moving forward or backward in burrows is of no consequence. You might say of them, “They can’t be rubbed the wrong way.” Their front feet are powerful and disproportionally large, supported by large chest muscles. The skeletal structure of the front legs and chest is enlarged as well. The mole can back up, retracing its steps, or perform a partial backwards somersault and return head first. Its very narrow pelvic bone structure allows it to execute this turn.

So are they really destructive? They make deep tunnels but they also travel the well-known shallow paths that you see in lawns. Most scientific sources say they don’t eat roots or bulbs as is commonly believed. Their tunnelling can disturb these tubers but they are not a target. In fact moles like worms and grubs, and most of our worms are actually non-native invasive species. So gardeners, put down your pitch forks as I deliver this message: “Worms are not the do-gooders we were led to believe.” Yes, your common night crawler is an exotic—stay tuned for next week’s story.

And what’s the point? Well, Blue does much more damage than any mole that has ever ventured onto our property and we still kept him; in fact we are fond of him, foibles and all. So I guess I’ll leave the mole demise products to collect dust on the garden center shelves. And yes, like every pet owner, I too enjoy weaving my darlings into my stories! n