A Date in History 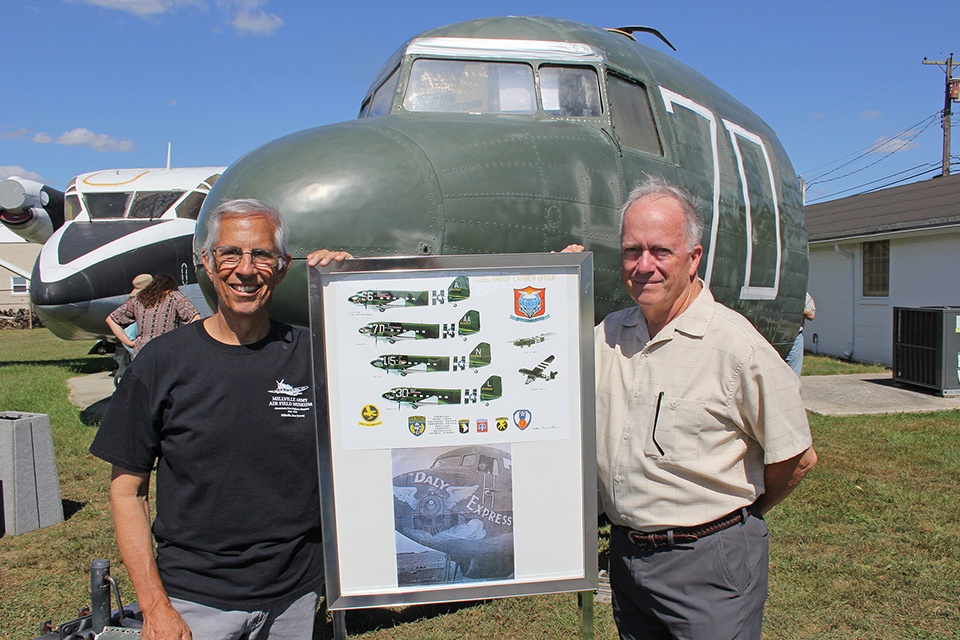 Bob Dalessandro and Bob Leicht show a detailed display of the C-47 Skytrain WWII aircraft. Dalessandro and Leicht are project directors for the restoration of the Millville Army Air Field Museum’s C-47 nose seen in the background that will have a historically accurate paint scheme honoring Dalessandro’s father, and all those who participated in The Allied Liberation of Holland in 1944.

The Millville Army Air Field Museum (MAAFM) held a very special ceremony on September 17, honoring a WWII aircraft, an important date in history, and the countless veterans who served on that day.

The museum’s commemorative event recognized the 75th anniversary of Operation Market Garden—the Liberation of Holland by unveiling its historic WWII C-47 Skytrain nose, which is undergoing a full restoration and honoring the memory of 2nd LT. A. Dalessandro, from Woodbury, NJ, who was a pilot during that operation, and all those who served on that mission.

Operation Market Garden was the largest airborne operation up to that date during the war. Some 34,000 Allied paratroopers and glidermen—American, British and Polish—were delivered into Holland by air that day to secure a northern route over the Rhine River for ground forces, which could have ended the war by Christmas.

“It was a tough fight with mixed results,” said Bob Dalessandro, whose father will be commemorated on the MAAFM’s Skytrain nose. “On that day in history, 90 C-47s of the 436th Troop Carrier Group departed RAF Membury, England, for the 625-mile flight to their drop zone in Holland. My dad piloted one of those C-47s. It was his first combat mission of the war.”

Dalessandro, who served in the U.S. Army from 1972 to 1980, and Col. Bob Leicht, retired Airborne Infantryman, from Middletown, DE, are project leaders for the restoration of the C-47 Skytrain nose. Leicht has a distinguished military career of 27 years with the 82nd Airborne and Special Forces. Tim Jacobsen, retired educator from Millville, is the on-site director of the project, overseeing technical work and painting.

Dalessandro and Leicht started restoration of the C-47 nose at the Millville Army Air Field Museum this summer, and with the help of a team of volunteers from the museum, the anticipated completion date is spring of 2020, in time for an unveiling at the scheduled 2020 Millville Wheels and Wings Airshow on Memorial Day weekend.

The C-47 Skytrain nose will undergo a full exterior and cockpit restoration and once complete will display the insignia and historically accurate paint scheme of the 80th Troop Carrier Transport, 436th Troop Carrier Group of the European Theater of Operations, WWII. The nose is on long-term loan to the MAAFM from the National Museum of the Marine Corps.

“On behalf of the Millville Army Air Field Museum, we are honored to display this important historic artifact and excited about this restoration project,” says Chuck Wyble, museum president. “We offer heartfelt appreciation to Bob Leicht and Bob Dalessandro for their commitment to overseeing this project and to all of our museum volunteers for their dedication and hard work on the C-47 restoration.”

It recognizes the more than 10,000 men and women who served at Millville during WWII, including 1,500 pilots who received advanced fighter training in P-47 ‘Thunderbolt’ and P-40 ‘Warhawk’ fighter planes. The Museum recognizes all aspects of aviation history through its displays, community events, and educational programs. The MAAFM is open Tuesday through Sunday, 10am to 4pm; Mondays by appointment. Admission is free.