Light pollution is robbing us of our “starry, starry nights,” yet there are lighting design changes that could open our skies back up to stargazing. 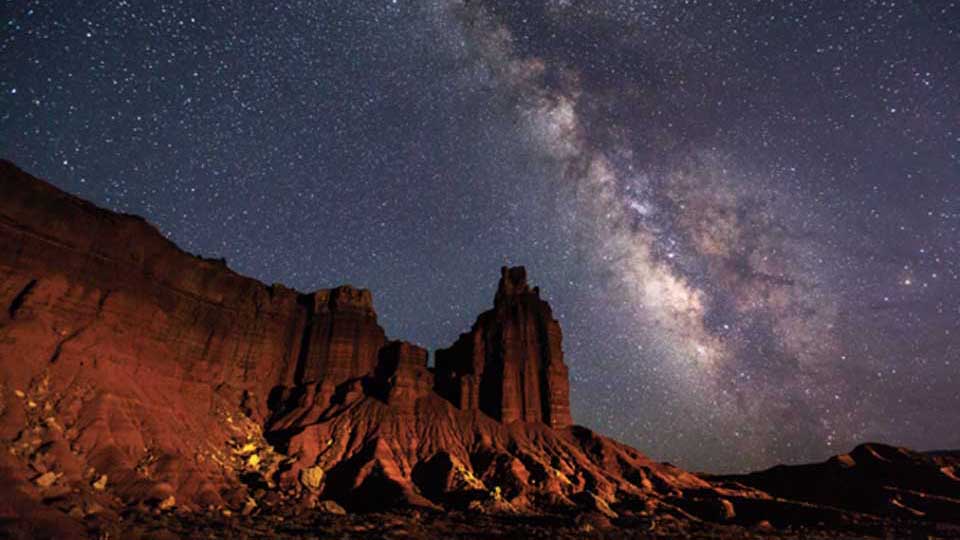 As a young teenager I complained to my mother that I was having trouble seeing the chalkboard in school. It took weeks of begging to get her to overcome her vanity about her daughter’s appearance and agree to schedule an eye exam for me. Wearing glasses opened up a world that I had forgotten even existed. We lived near Union Lake in Millville in a neighborhood without streetlights. As evening fell, suddenly the night sky took on a renewed glory. Looking up at the heavens my eyes filled with tears. As my nearsightedness had progressed, I had lost sight of the stars.

I wept in sorrow for what I had been missing for years and was now so clear. There were tears of joy, too, for what I was seeing. I refused to go back inside the house. It was as if I personally had rediscovered the universe. I told anyone who would listen, “Just look at the stars!”

I was lucky to have a friend named Steve Jublou. He was a Boy Scout who loved the out-of-doors, stars, and Greek mythology. He described the hunter Orion’s belt and the myth detailing Orion’s adventures. He explained that because of this constellation’s placement on the celestial equator, it can be seen throughout the world in the night sky. Even in high school it was obvious that his destiny would be to join the ranks of future science teachers. His enthusiasm for the stars was profound and contagious.

Fred Schaaf was also a classmate; later he would become one our country’s most celebrated amateur astronomers, publishing a host of books (13) on the heavens.

Today we are all being robbed of the views the night sky holds. Manmade light from street lamps, parking lots, sports stadiums, prisons, LEDs, gas flames, car beams and the like, intended to illuminate the earth, shine upwards and reflect down off particulates and moisture, so that seeing the heavens has become impossible.

Shields, a simple design change involving a shade or hood over the light source, can keep the light on the intended object or area. Many towns and cities have adopted “shielded lighting” ordinances. But vigilance is needed on the part of land-use boards and city engineers to make sure developers are aware of and institute this requirement. It’s as simple as selecting new fixtures with hoods, though little has been done about replacing existing lights.

Cities and towns that have major telescope installations take lighting ordinances very seriously. Since the 1980s Caltech and Palomar Observatory have worked with surrounding communities to minimize light pollution. Tucson, Arizona, is surrounded by observatories and views protecting night skies is a mandate.

When I first moved to the river in 1983 we could see the northern sky from our dock. Then a new car dealership put in lighting that blotted out the view. Later the City of Millville installed period lighting. It was stylish but the globes allowed light to shine upwards. The color of the sky changed and the northern view of stars went away. Millville later adopted a shielded lighting ordinance advocated by CU Maurice River for future projects. But the globes remain unchanged.

This scenario has repeated itself worldwide to the point where a quarter of the world’s land surface is now affected by light pollution. And with each passing generation people accept a new normal, in this instance the increasing inability to see the heavens. A term has been coined for this phenomenon—“shifting baseline syndrome.” By way of example an old timer used to tell me that ducks use to blacken the sky on the Menantico during duck season. I took his words to be hyperbole, but today I suspect they were the truth.

I tell my grandnieces and nephews, “When things got cold the river would freeze nearly across, and if ducks were stones you could hop across the river on their backs.” Their new normal is a few hundred ducks where there were once thousands, and that’s on a great day. They see some ducks and think, “Cool.” I see ducks and say, “Where have they all gone.” And ice? Don’t even get me started. So each generation establishes a new baseline of lower numbers. You can’t conceive of what you’re missing if you have never seen it. (CU Maurice River has documented this avian decline over the past 35 years.)

Stars are gradually disappearing from view and younger generations don’t know what they’ve lost. A pair of glasses isn’t going to offer them a magical solution as it did for me. The stars are still there but our ability to see them is changing, as light pollution hampers our view of the heavens.

Air pollution used to be the main culprit. I remember going to Pittsburgh as a child when coal was still burned to heat houses and the factories manufactured steel. The sky was blackened; on some days, a permanent dusk hung in the air. The Environmental Protection Agency has done a wonderful job of improving our air quality; particulate is much less of a problem, both for our lungs and for stargazing, than it was when I was young.

Many cities still remain famous for smog. The growing use of electric cars will greatly improve their situation. You may recall news-making photographs taken from cities around the world during the pandemic lockdown. People posted before and during photos and marveled at the clear skylines as cars and factories took a timeout. It gave folks a new baseline to think about. But alas, we are creatures of habit; hanging on to that moment and advocating for a cleaner tomorrow is difficult to do as the responsibilities of life whisk us away to our old selves.

So how does light pollution impact the planet we live on—beyond the chance to see the Milky Way on a cloudless night and to share the human heritage of the constellations that inspired so many myths? Beyond our right to appreciate the heavens that have been stolen by wasted light? It impacts us in many ways.

Some will advocate that we need lighting to keep criminals at bay, but studies show that evil-doers are more active where there is light because they too are scared of the dark. Nonetheless, lighting is one of the primary things people demand where there is crime. It’s ironic that lighting will only allow them to identify—and not deter—the criminal. And criminals aren’t active above the light; only below it—so shield it!

Let’s talk about other creatures that share our planet. Lighting misdirects migrating birds that navigate, like ancient ships, by the stars. This disorientation is responsible for thousands of avian deaths.

Insects whose numbers are in a steep decline worldwide are also disoriented by light. Swiss researchers found that moths, beetles, and other bugs that are night-time pollinators are attracted by night lighting, thus failing to pollinate fruit; as a result crops have fallen by 13 percent. Our beloved fireflies are one of the insects whose numbers have been adversely impacted by artificial lighting. Moths attracted to light are exhausted and killed, if a predator doesn’t pick them off first.

Like moths, salamanders and other creatures’ body clocks are interrupted such that foraging time is restricted to fewer hours. Sea turtles are confused by lighting and are drawn to roadways instead of returning to the ocean. Because of this, wildlife agencies have directed beachfront lighting to be turned off along some stretches to protect these marine creatures.

And what about us? Light pollution intrudes on the privacy of people’s homes. Our sleep patterns are adversely affected by nightlights as well. Empty office buildings illuminated at night are an obvious culprit, as are the structures that feature the light shows.

On October 20 and 21, if we have cloudless nights, consider going to a dark sky near you to view the Orionid meteor shower. Then consider improving our grandchildren’s night skies; don’t allow them to be robbed of the myths, legends, and dreams that fired our ancestors’ imaginations.

Sources
Bayshore Summer, by Pete Dunne
Fred Schaaf’s lectures
“Light Pollution: The Dark Side of Leaving the Lights On,” Bernard Coetzee, The Conversation, April 2018
International Dark-Sky Association
“The Dark Side of Light: How Artificial Lighting Is Harming the Natural World,” Nature, January 2018

Some Easy Fixes to Reduce Light Pollution
You can help protect reptiles, amphibians, birds, mammals, insects—and people—by taking these steps:
• Use motion detectors as opposed to constant lighting.
• Purchase lights that are directed downward—shielded.
• Use LED lights that are warm-colored as opposed to white.
• Don’t shine lights into neighboring properties.
• Turn off unnecessary illumination of yards and other areas.