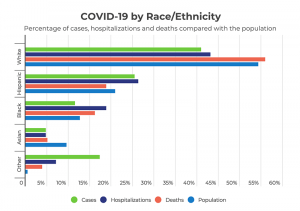 The novel coronavirus pandemic is continuing to be a scourge on the world’s citizens. As of Monday, March 22, according to foxnews.com, “the novel coronavirus has infected more than 123,245,026 people across 192 countries and territories, resulting in at least 2,716,196 deaths. In the U.S., all 50 states plus the District of Columbia have reported confirmed cases of COVID-19, tallying more than 29,818,936 illnesses and at least 542,359 deaths.”

After breaking down the numbers, many medical experts are aware that the coronavirus has hit communities of color extremely hard.

Dr. Evelyn Balogun, medical director for Urgent Care, Employee Health, and Occupational Medicine at Inspira Health Network, states, “Data provided by the CDC shows that people of color are three to four times more likely to be hospitalized due to covid-related complications and two times more likely to die from this illness.”

Those deemed people of color in the United States include people of African descent, the Latinx community, the Indigenous peoples of this land, and more.

Across the nation, according to the website, “Latinos are 2.4 times more likely to have died as “Whites” … when age is taken into account.”

As an explanation as to why those in the Hispanic community are contracting the coronavirus at such high rates, generally, according to an article from the Los Angeles Times, “Latino communities are at higher risk for the illness for several reasons. They tend to be essential workers who must go to retail stores, manufacturing plants and other sites rather than working from home.”

Language barriers also factor in as they can keep many members of the Latinx community from obtaining the vital information needed to protect themselves or from getting access to good healthcare.

In New Jersey, according to worldpopulationreview.com, as of February 2021, 67.78 percent of the population is white, and 13.46 percent consists of people from African descent. However, according to covid19.nj.gov, as of March 2, 2021, 55 percent of covid-19 deaths in the state were “white” people, while 16.2 percent were people of African descent.

People of color in this country are in the minority yet are dying at higher percentage rates than “Whites” who are in the majority. How can this be?

Experts across many fields are beginning to recognize that, as stated by the Centers for Disease Control and Prevention (CDC), “Long-standing systemic health and social inequities have put many people from racial and ethnic minority groups at increased risk of getting sick and dying from Covid-19.”

Dr. Balogun, whose “interest in medicine was driven by a love of learning,” notes several reasons for this disparity. “First, people of color function in significant numbers as frontline/essential workers and so have a higher likelihood of exposures during the pandemic. Second, there are resource issues around access to medical care and testing.

“Third, higher underlying rates of co-morbid diseases such as diabetes, obesity and heart disease increase the risk of more severe covid illness in these communities.”

When asked if there was anything healthcare providers can do to change this trend, Dr. Balogun says, “Addressing these challenges requires a willingness to openly address the long-standing factors around trust and other social determinants which have informed long standing disparities in access.”

The CDC states that discrimination, educational, income, and wealth gaps, and housing are also causes for these disparities.

Additionally, implicit bias in the medical field plays a role and is described by the Perception Institute as “when we have attitudes towards people or associate stereotypes with them without our conscious knowledge.”

“A fairly commonplace example of this,” the institute reveals,” is seen in studies that show that white people will frequently associate criminality with black people without even realizing they’re doing it.”

Studies have shown that racism is the key factor for these discrepancies. For example, an article in theconversation.com reveals, “An analysis by the National Academy of Sciences found African Americans receive poorer quality care than “white” patients across all medical interventions and routine health services—even when insurance status, income, age, co-morbid conditions, and symptom expression were equal.”

While the public health emergency rages on, (the virus is evolving into deadlier variants) the federal government and medical experts are urging U.S. citizens to set up appointments to get vaccinated. According to the CDC, there currently are three vaccines recommended and authorized to combat the coronavirus: Pfizer-BioNTech, Moderna, and Johnson & Johnson’s Janssen Covid-19 vaccines.

People of color, particularly African Americans, are leery of injecting anything into their bodies suggested by the U.S. governmental institutions.

In a recent USA Today article titled, America has a history of medically abusing Black people. No wonder many are wary of COVID-19 Vaccine, by Javonte Anderson, she writes, “Since the country’s inception, the American medical institution has subjected Black bodies to abuse, exploitation and experimentation. Corpses being pulled from the ground for scientific study. Black women being sterilized without their knowledge and robbed of the opportunity to bear children.”

“Perhaps the most notorious example of experimentation,” Anderson adds, “was the Tuskegee Syphilis Study, in which 400 sharecroppers were denied treatment for syphilis over 40 years. In 1932, U.S. Public Health Service employees recruited hundreds of poor, uneducated African American men with syphilis and watched them die avoidable deaths over time, even after a cure was found.”

“Though communities of color have been disproportionately impacted by this pandemic, we know that members of the … African American community have the lowest likelihood of accepting the vaccine and this in part is due to a complex relationship with the medical community,” says Dr. Balogun.

“We cannot undo the injustices of such historical events such as the Tuskegee experiment and it must be acknowledged as an underpinning part of our collective experience, but the level of mistrust and fear is also reflective of a current relationship.”

Dr. Balogun shares some thoughts in an effort to alleviate the fears many members in communities of color have about taking the vaccine.

“To date, we have successfully vaccinated 77 million people in the United States. Worldwide, the number of vaccinated stands at over 200 million,” she says. “A path forward must … be guided by a transparent and honest discussion which addresses … modern day concerns.

“Some of the questions around the safety and efficacy of Covid-vaccines have been voiced by other communities and perhaps if we start common concern, we can set a platform recognizing this is a shared narrative.

“To this point,” she continues, “I would ask the reader to again look at the number of vaccines provided globally and throughout the United States as a reference point. In addition to the number of vaccines administered to date, we should also focus on the active and robust surveillance programs that have been implemented by the CDC and other organizations to monitor the safety of the vaccines.

“The CDC issued a recent publication which concluded that the patterns of reactions establish that there are no serious safety concerns.”

PrevPreviousGood Sports
NextVineland Library Board Votes to Lay Off 10Next