Local artist uses symbols to tell the stories of women and African Americans, earning her a TIME magazine “perfect cover.” 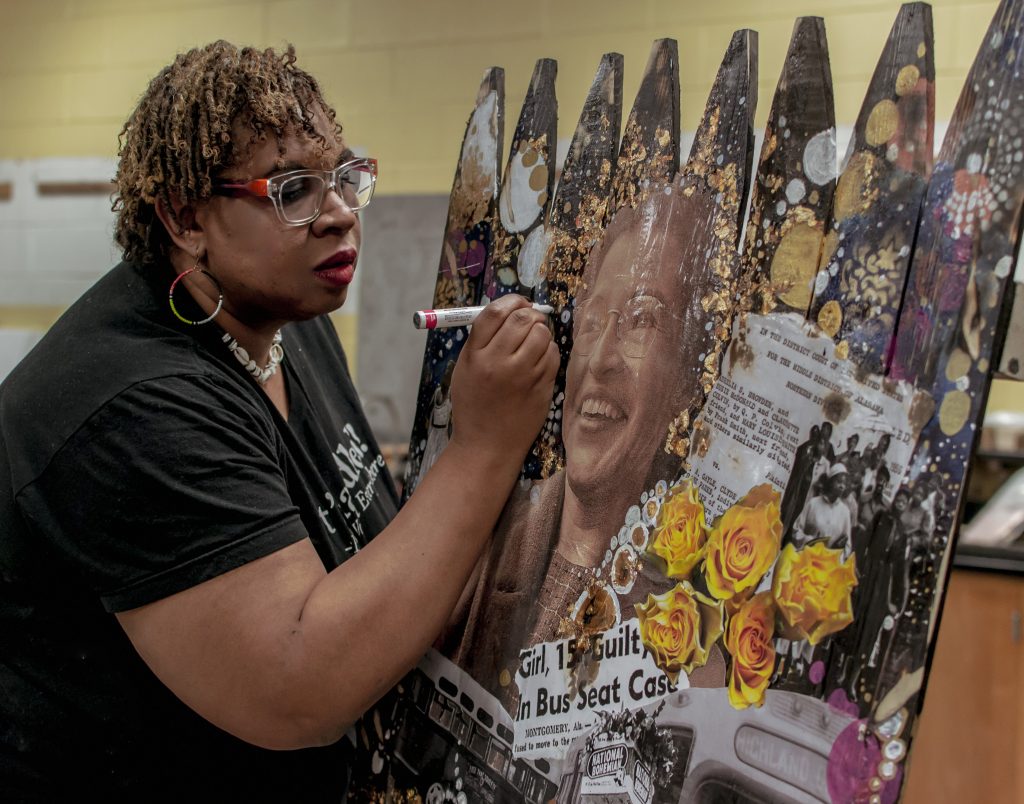 Since the beginning of time, women have played an invaluable, oftentimes undervalued role in the shaping of human civilization.

From Makeda, the Queen of Sheba, to Queen Nefertiti of Egypt, to Queen Nzinga of Angola; from Saint Joan of Arc to Amelia Earhart; from Sojourner Truth to Katherine Johnson to Mother Teresa; from Beyonce to Greta Thunberg—without the compassion, strength, ingenuity, and foresight of these women and countless others, the world in which we live would be less enjoyable, less loving, just less.

In 2020, more people across the planet are beginning to realize this and are doing more to honor women for their accomplishments and impacts on society.

For example, in celebration of the Women’s Suffrage movement and the ratification of the 19th amendment to the U.S. Constitution—which gave American women their long-sought-after right to vote—TIME Magazine created the spectacular 100 Women of the Year project. According to an article by Jessica Stewart published on mymodernmet.com, “Inspired by the magazine’s Person of the Year, which until 1999 was ‘Man of the Year,’ TIME has selected a magnificent array of women who have made a difference in the world. From politicians to activists, from athletes to artists, each woman is a trailblazer.”

In an article on time.com, Nancy Gibbs, director of Harvard (University’s) Kennedy School’s Shorenstein Center, and former editor-in-chief at TIME said, “[T]his project is an exercise in looking at the ways in which women held power due to systemic inequality.”

To bring this project to fruition, TIME commissioned 49 leading artists from across the globe to create portraits of the women selected to be on the cover. Some of the women who graced the cover: Ruth Bader Ginsburg, Wangari Maathai, and Princess Diana, to name a few.

One of the artists commissioned to participate in this commemorative project is South Jersey’s own, Lavett Ballard. A Willingboro resident, Ballard was commissioned to create a cover titled “1955: The Bus Riders, Demanding Dignity.”

Ballard, a professor at RCSJ Cumberland’s Arts and Innovation Center in Millville, as well as Rowan University, was chosen to create a piece paying homage to Rosa Parks, Aurelia Browder, Claudette Colvin, and Mary Louise Smith, the last two having been teenagers during their acts of bravery.

These four women were all arrested, at different points, for choosing to sit in the front of a segregated bus, rather than move to the back, as was required by a city ordinance in Montgomery, Alabama.

Their courageous deeds helped launch the Montgomery Bus Boycott of 1955 and were inspirational to leaders such as Dr. Martin Luther King, Jr.

They were an inspiration to Ballard, as well.

“All these women reminded me of strong women…,” Ballard says. “These … [women] could have sat in the back. They had been growing up in Alabama their whole [lives]. They knew what to do once they stepped on that bus.

“But at one point or another they all said, ‘Enough’s enough.’ ”

Parks, who became the face of the Boycott, was a fighter, in Ballard’s estimation: “She was like a concrete rose. She just bloomed in spite of [adversity] and she was like—if this is going to help the movement, I’m down.”

History books don’t often tell the hardships these women, including Parks, had to endure after standing (or sitting) for their rights.

“And let me tell you,” Ballard continues, “you had to be a strong person, because they don’t talk about the fact that she got death threats. Her husband lost his job. She lost her job.”

Ballard, whose consequential pieces are being recognized by artists and art lovers across the country, was named one of the Top 10 Female Emerging Artists to Collect, by Black Art in America.

According to time.com, her work “focuses on ‘themes of history, colorism and Afrofuturism.’ ”

Afrofuturism is a term based on the writings of Octavia Butler, says Ballard, in contrast to some movies or TV programs about the future, in which people of African descent largely don’t exist, or are reduced to stereotypical roles, like servants.

“Afrofuturism is the idea that Africans or people of African descent are in the future,” Ballard explains. “They are powerful. They … have their own world, have their own identity. They have their own money. They’re beautiful, they’re eclectic, they’re strong, they’re intelligent.”

A perfect example of Afrofuturism is the movie Black Panther, Ballard reveals.

“Afrofuturism in artwork is this idea that we are gods and goddesses and the kings and queens of our future,” she continues. “So in respect to my art, a lot of times, I started implementing gold and metallics as a means of tying us to our regal past, that is often forgotten.

Ballard used this technique in her depiction of Parks on the TIME Magazine cover. “Why just put a picture of Rosa Parks just sitting there, when I can make Rosa Parks the goddess that she is by giving her a golden crown—having her dance amongst the galaxies and stars.

“It’s my superpower to pass that power on to her.”

Ballard, who is known for her mixed media collages, has mastered a unique style that differs from many of her contemporaries.

“I do installation art … where I’m collaging, taking paper, metallic foils and putting them on wood—specifically reclaimed fences,” Ballard explains.

According to the acclaimed artist, collaging on reclaimed fences is not as difficult as it may appear. “Wood is flat,” Ballard declares. “As a substrate, it’s perfect.”

Ballard says working on reclaimed wood is a way of giving it new life and gives observers a different feel than paintings on a regular canvas. On her website she explains further: “I use reclaimed large and small aged wood fences, as a symbolic reference to how fences keep people in and out, just as racial and gender identities can do the same socially.”

“And I love the way the fence looks on your wall,” she continues. “It’s something about how you can see slats. If you light it perfectly, you can see the shadows. They elongate.”

When the artist discovered she was commissioned to create such a significant piece, Ballard was in complete disbelief. She was in the middle of grading homework assignments when she saw an e-mail sent to her from D.W. Pine, creative and art director with TIME.

“My first thought was, ‘is this some kind of scam?” Ballard reveals. “I’m thinking this has got to be a scam, this is really a mean thing to do to somebody. But in the back of my head, I was like if this is real—this is huge!”

With her husband beside her, she found out the e-mail was, in fact, real. Pine, who according to his website, has designed more than 700 TIME covers of his own, found out about Ballard’s work after googling African American female artists.

While doing his research, he saw that Ballard was one of the Top 10 Female Emerging Artists to Collect, by Black Art in America. He also found a picture of a piece of artwork she did for a friend that had Rosa Parks in it, on the friend’s Instagram page.

Her piece, which took about two and a half weeks to complete, was showcased in the March 16 edition of the high-profile magazine.

Ballard was a non-traditional student and holds a dual Bachelor’s in Studio Art and Art History with a minor in Museum Studies, as well as an MFA. She gives props to the Arts and Innovation Center for providing her with some timely assistance for the project.

“We were able to accommodate Lavett by printing our large-format artwork that she used to create her pieces featured on the cover,” says Jacqueline Sandro, director of Fine Arts at the AIC for RCSJ, among other positions.

Sandro is also a big fan of Ballard’s art. “I would describe her work as moving, impactful, visual texture, colorful and inviting,” she says. “It moves the viewer to want to get close and understand what the imagery, textures and physical objects mean.

“The pieces are filled with symbols and metaphors to convey a message of African American identity, racial inequality, and the fences that keep people in or out.”

Ballard, who names Bisa Butler, Alfred Conteh, and Delita Martin as some of her current favorite artists, enjoys teaching at RCSJ.

“Most of my students are really open and eager,” says Ballard. “The things they’re doing at the Arts and Innovation Center with bringing in different artists of … diverse backgrounds is really good. They have really great shows.”

Sandro is thankful for Ballard’s presence at the school. “I think Lavette is someone who serves as such a positive role model for the art students and all our students. I think her success has definitely instilled a sense of pride in the students that someone in our community has made the big time,” says Sandro.

“She serves as a positive role model stressing that if you work hard and live, eat and breathe art, or anything that you are passionate about, you will succeed!

Although Ballard is elated that all of her hard work and perseverance has led her to this momentous achievement, the COVID-19 health emergency has tempered her joy.

“It’s a great feeling, [but] it’s not as great as I think it would have been … had we not had the pandemic going on,” she says.

A banquet with Katie Couric slated as a special guest, a documentary showing, and other events planned for the 100 Women of the Year project, have been put on hold.

However, Ballard, much like Parks, is a fighter and will not allow the current health emergency to stall her progression. She has some fabulous, future endeavors upon the horizon.

Ballard recently got accepted into Yaddo, “a retreat for artists in Saratoga, NY.”

“James Baldwin has been in this residency,” says Ballard. “Jacob Laurence and all these big-time artists and writers and musicians [have been there]. This is a big deal I got accepted.”

Ballard, who is on the precipice of reaching the highest heights in the art world, stays humble and won’t hesitate to share her wisdom with other artists, whether they have experience or are up and coming.

“Always look at art, even if it’s art that you don’t necessarily like or agree with,” she says. “Try to support each other. Go to a friend’s exhibit. You’ll never know who will show up.

“Keep working on your work, perfecting it. Be open. Try to know your worth—and add tax.”