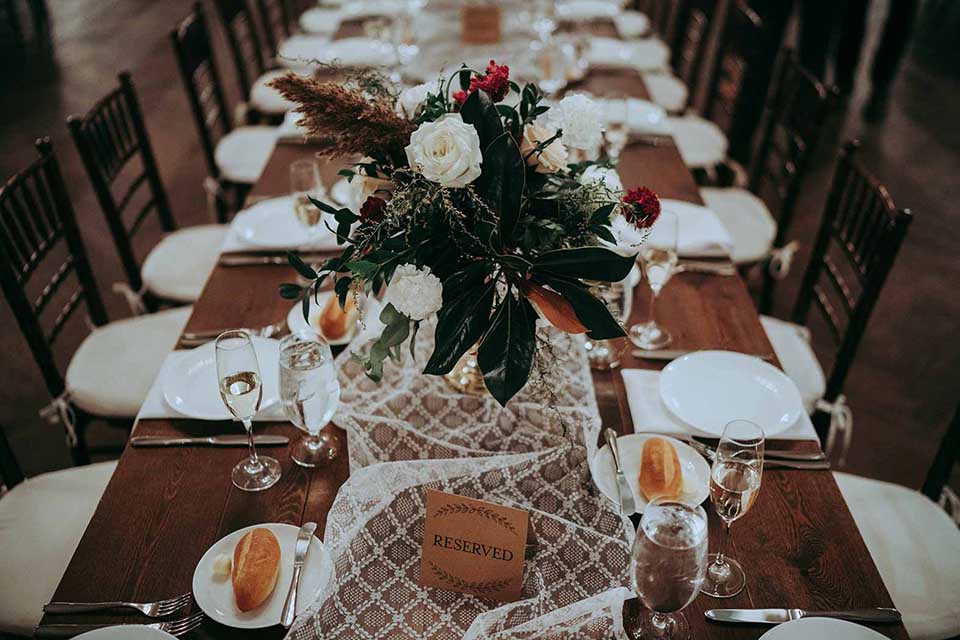 The Grove at Centerton and other area restaurants have the set the table for you and yours.
by L.M. Jarvis

Even Cupid has trouble keeping his distance during a worldwide pandemic. Ladies and gentlemen, let the second annual Covid-19 Valentine’s Day planning begin. Oh, Covid, schmovid. Wash your hands, grab your mask and booster card, and take Your Person out for a romantic dinner for two.

Okay, so a few things upfront:

• This year, the holiday is on a Monday. Nothing says romance like a Monday, right!

• Yes, the Omicron variant is swirling around us still, but that doesn’t mean we are in full shut-it-down, microwave dinner-in-front-of-the flat-screen mode.

• Reservations are highly recommended for most of the restaurants here. Some restaurants are experiencing extreme staffing problems, while others anticipate a busy weekend, so you may want to call ahead to reserve your spot.

Still, your favorite restaurants are only minutes from your door, spotlessly clean and ready to help you party like it’s 2019. Well, sort of.

The point is: You have options. SNJ Today has looked around the greater Cumberland County area to sniff out some of the best dining options as well as a few ways to sprinkle a little love and romance into your life. It’s not an all-inclusive list, however, so we invite you to sniff out others—including wineries, breweries, cafes, and such—on your own.

It’s not quite as hectic as some of the busiest days, such as Mother’s Day, but it means that owner Ken Esposito will add extra help and run a few food specials to shake up the menu just a little.

Maplewood III is a landmark restaurant in Vineland that has attracted fans of its seafood-heavy menu for generations.

Fans of the restaurant can order off the regular menu or choose something different from the special menu planned. One of the special dishes by chef Rey Gutierrez will be a lobster ravioli, topped with grilled shrimp in a seafood blush sauce. Special desserts will also be available.

Valentine’s Day is always a special time at the restaurant, when couples have been known to pop the big question during dinner, Esposito said.

The restaurant will be fully staffed during the holiday weekend and will be ready for the crowds when they come in the door.

“We will also open both dining rooms,” he said.

The Grove at Centerton and Ten22 Tavern, 1022 Almond Road in Elmer, has got the romance stuff covered from all angles. Case in point: The restaurant’s Stop Light Party. Scheduled from 7 to 10 p.m. on Saturday, February 12, the party splits up the revelers into three groups, all based on relationship status.

“It’s brand new, we’re trying it out. It’s something different,” said Emily Seltzer, marketing manager of The Grove, the 15,000-square-foot special event center as well as its restaurant, Ten22 Tavern.

An accessory that will be available at the door will allow guests to declare whether they are single (green means go!), in a complicated relationship (yellow, for caution), or taken and off limits (red). The Grove’s marketing manager Emily Seltzer wants guests to have a good time, no matter if they have already found their love match or are still searching.

Among the accessories in their stop light color of choice are heart-shaped glasses, beads, ring pops, scarves, stickers and more. “Just some things that will really pop.”

Best part of the deal? There’s no cover charge. “Just come join us and have fun,” Seltzer said.

The drink specials might just be the best part. Among the martinis that will be served: “It’s Not Me, It’s You,” “You Wish” and ‘Call Me Maybe.”

It’s not the only Valentine’s Day event The Grove has planned.

Okay, so maybe a quiet dinner is more your scene. Treat your favorite person to the Grove’s Valentine’s Day Dinner, a four-course meal planned from 5 to 8 p.m., Saturday, February 12. At a cost of $54 per person, the prix fixe dinner allows guests to select from three appetizers, an intermezzo (sorbet, to clean the palate) four entrée options (filet mignon, halibut, chicken Florentine or rack of lamb) and a “lover’s sampler” dessert.

Reservations are still available, but don’t wait too long. “We are filling up quickly,” Seltzer said.

The Ten22 Tavern also will be open on Valentine’s Day weekend, though not on Monday, February 14, Its regular menu ranges from comfort food appetizers (Ten22 Tavern Chili or fried mac and cheese bites) to man-friendly meats (smoked St. Louis style barbecue ribs or beef brisket). The menu also features a specialized number of entrees ranging from steak and hand-dipped coconut shrimp to Italian dishes such as the tried-and-true chicken parm or the flavorful tortellini di pollo alla panna (cheese-filled tortellini with blackened chicken in a chipotle-roasted garlic cream).

Note: They will be closed on Monday, February 14, Valentine’s Day.

Normally, Merighi’s would be closed on a Monday, but the restaurant will be open from 4 to 9:30 p.m. on Saturday, February 12 and Monday, February 14, with a special menu planned out to give patrons a little something different.

“It gives our chefs a chance to be artistic and create,” said Merighi. “And it gives our regular customers a chance to have something different than they would have every day.”

Merighi agreed to give us a little preview of the Valentine’s Day specials.

“We are going to do a charcuterie board,” he said. The board, with its blend of savory meats and cheeses, is a perfect way to whet the appetite.

One of the dishes he has planned is Salmon Oscar, a twist on a standard dish that will use Faroe Island salmon, on top of asparagus, with jumbo lump crabmeat and hollandaise sauce. In addition, he will have a twist on his crabcakes, sautéing them in a crabmeat scampi sauce.

Merighi said he is fully staffed for the holiday, in part because the cold weather forces all its outdoor café Luna’s employees inside.

“And we will have a special rose for the ladies,” he added.

Kaycee Ray’s (the first names of both owners) is an American-style pub that puts a twist on classic dishes. It’s a restaurant keen on big burgers, big salads and big ol’ sandwiches such as its broccoli rabe and cheese-stuffed sandwich, topped with roasted tomatoes and provolone cheese on a soft roll. It’s located in the back of the Landis Theater, so guests can head straight upstairs after enjoying a show at the theater, and go to another show while enjoying dinner. Thursdays rotate each week from comedy and jazz to karaoke and even a drag show.

“We are planning on having some live music” on Monday, February 14, Valentine’s Day, said Kaycee Zelkovsky, who owns the spot with Ray Mamrak. “We have a pretty big dance floor. We have a whole new stage with sound and lighting upstairs. It’s cool.”

The Valentine’s Day show should be a fun time. She said Kaycee Ray’s will have live entertainment, though they have not settled on the act. In addition, she said there will be drink specials to add a little fun.

Mondays are normally karaoke night, where DJ Paul spins a good mix, she said, everything from country and music from the 1960s and 70s to more modern songs.

Every week, the restaurant has live music on Friday and Saturday nights without a cover charge. Thursdays are different every week.

First Thursdays: Comedy night, which has a $10 cover.

“We get a really nice karaoke crowd,” said Zelkovsky. “It’s like a niche thing, something to do.”

Hours: 2 to midnight Thursdays through Mondays.

…and a Show at The Landis or The Levoy

Lucky us to have two regional theaters that offer fine entertainment at affordable ticket prices. You still have time to get tickets to one of three shows available for Valentine’s Day weekend, all while supporting your hometown theater. Here is what’s on the schedule:

Landis Theater, 830 E. Landis Ave., Vineland, has two shows on Valentine’s Day weekend, both a tribute to classic oldies. The theater is also connected to the pub, Upstairs at Kaycee Ray’s.

The Original Moonlighters will perform at 8 p.m. February 11, singing classics ranging from the Temptations and the Four Tops to Stevie Wonder, Marvin Gaye and the Jackson Five. Tickets are $20 each. Doors open at 7 p.m.

The Exclusives celebrate the doo-wop era of music at 8 p.m. February 12, celebrating the music of Little Anthony and the Imperials, the Platters, the Five Satins, Dion and the Belmonts, the Drifters and Frankie Valli and the Four Seasons. Tickets are $20 each. Doors open at 7 p.m.

Levoy Theater, 126-130 N. High St., Millville, will feature Superunknown, the music of the late Chris Cornell, lead vocalist and rhythm guitarist of the bands Soundgarden and Audioslave. Tickets are $19 to 22. Doors open at 7 p.m. and the Vaudeville Bar also will be open.