Summer in a Jar

Come wintertime, a taste of summer will be most welcome, say home canners in South Jersey. 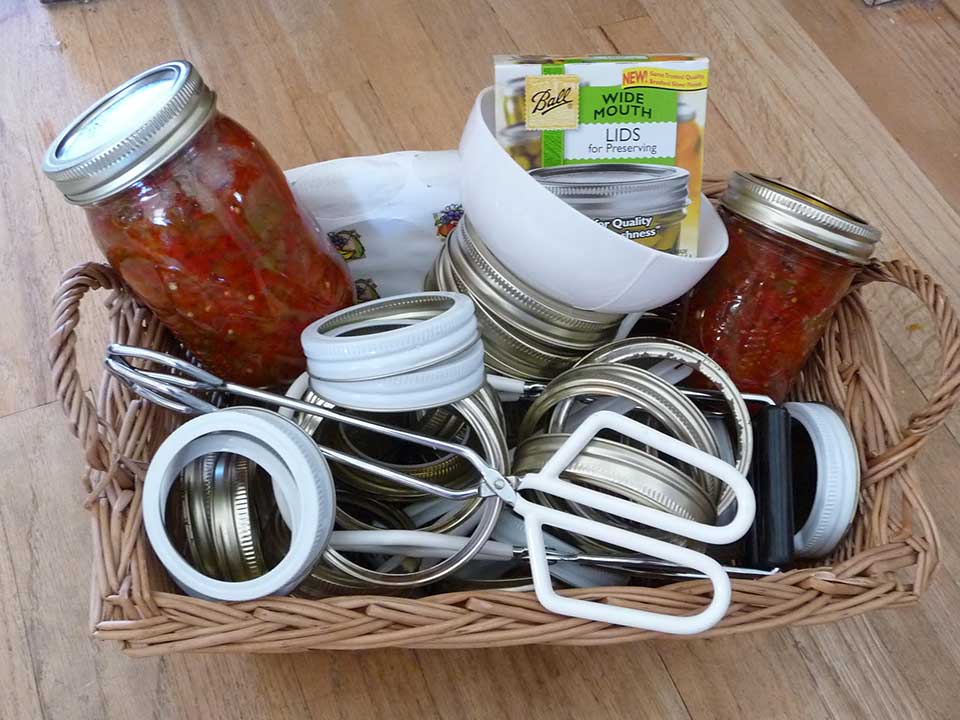 Several summers ago, a little later in the season than this, I was inspired to “put up” some canned goods. I made cucumbers into pickles, I stewed some tomatoes, I made sauce—or, as I’ve come to call it, gravy. I caught the canning bug after educating myself about the benefits of eating locally grown food. Besides that, I had grown up with fresh frozen peas on the table in midwinter, so I know the taste of store-bought canned and frozen food doesn’t even come close to matching what I could store away for the winter.

This is not to say that I knew the first place to start. Sure, I had watched my mother can and freeze the seasonal Jersey bounty, but truth be told, I had always steered clear of the kitchen. I can recall maybe once helping my Aunt Adeline make dill pickles, and once or twice assisting Mom with a pepper relish.

So I started on this trek alone, from scratch. I looked up some recipes online. My biggest concern was preventing botulism by making sure I knew how to do the boiling water bath, so I chose recipes that explained that process in detail. I knew I could phone Mom if I got stuck—and I did so on more than one occasion as I wiped my brow amidst pots of tomatoes stewing and more pots of water boiling. However, I wanted to challenge myself with this, my Zen project of the moment.

When I ventured out to buy the jars and lids, I discovered that there was a whole community of canners out there, and they are of a younger generation than I would have thought. We met at the store’s supply of canning paraphernalia, and would get into discussions over which jar was best—Mason or Ball, wide-mouth or regular. Even what gravy we were setting out to make, if we had ever made it before, where we got our recipes. When I got to the checkout with my stash of goodies, the cashier asked what I was making that day. It gave me reason to believe that the art of canning is not a dying art, after all, and was perhaps making a revival. In addition to the jars and stuff I bought, we renovated a small cupboard in our kitchen to hold the colorful array of pickles and sauce and spiced pears. For the frozen foods, I soon realized that our small unit below the fridge would not hold all I planned to store away, and we invested in a chest freezer. Food was becoming a growing expense in my household, with a teenager and two growing boys whose common refrain was “I’m hungry.”

By time I got the canning kick that year, the summer fruit season had passed, and I vowed to make some jams and preserves the following year. Blueberry jam is a favorite at our house, so I started with that. For the first batch, I focused on getting the recipe right and did not bother preserving them. Those four pint jars of blueberry I stowed in the fridge; our kids finished them in no time.

The jam gelled perfectly and I was happy with the recipe, which I got off the computer. I put my second batch in cup-size jelly jars, preserved them in boiling water, and those eight jars I stored behind the door of my kitchen cupboard. When the cold winds and snowy mornings arrived a few months later, we sat down to breakfast—and a taste of Jersey summer in a jar. Just a few years back, I got to thinking about a family-favorite pepper relish that had not been made for many years. The making of the relish was a late summer ritual in my years growing up on the family farm.
In the years since we have made the relish, I have seen (and bought) look-alikes at farm markets now and then. None of them has ever measured up; they were either too sweet or were made with hot peppers rather than the bell variety of pepper.

But I knew from experience that our version is a lot of work—washing and cutting peppers to ready for grinding, then pushing them into the hopper of a heavy-duty grinder and hand grinding all one and a half baskets of peppers and several onions (the electronic meat grinders don’t give you the right coarseness), then scalding and pickling, jarring and boiling. My sister agreed to help on this one and I asked my mother to be on standby for questions I knew we’d have along the way.

So that’s how we spent our Labor Day that year—with a labor of love in the kitchen. When Mom and Sis arrived at my house by mid-morning, I had most of the red and green bells ready to grind, was sterilizing the jars (in the dishwasher), and was soon to set the vinegar and spices to boil on the stove. The whole house soon had a wonderful scent that we all knew and loved; it was almost like no time had passed since we’d made our last batch. Except that a new trio of kids was traipsing through, sometimes stopping to take a turn on the grinder.

Later that day, after we had divvied up our 32 pints of Kent’s Pepper Relish, I was talking to my aunt about the origin of the recipe that I thought Mom had gotten from Grandmom. Turns out, my grandfather played a large part in the recipe’s acquisition. As a farmer, he sold produce to the restaurants and hotels in Atlantic City—Starn’s, Hackney’s, Dennis Hotel, and others—in the mid-1900s and had obtained the recipe from Kent’s Restaurant. That was the first time I had ever heard of the long-gone restaurant, so I had never made a connection between it and the name of our cherished relish.

Yes, we carried on a family tradition that Labor Day—and tapped into some fascinating regional history, too.