Green herons are excellent hunters as adults and rely on expert stalking skills. 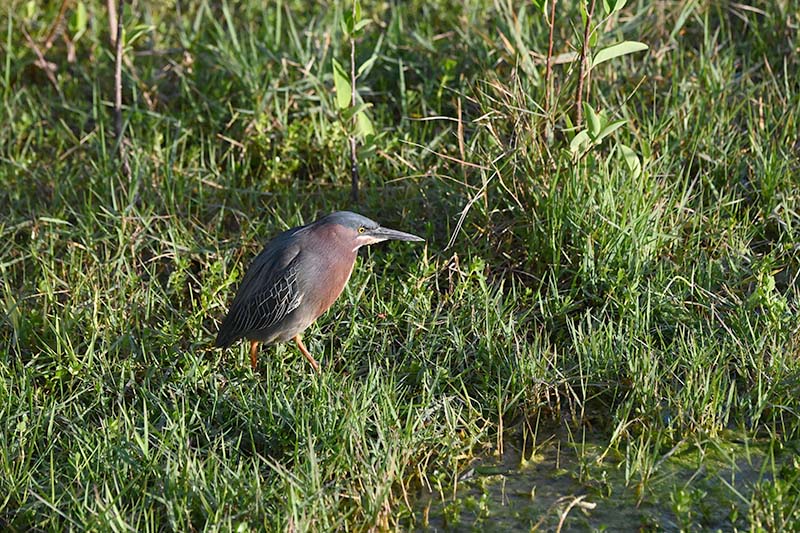 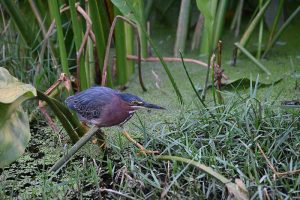 We had lived on the Maurice River for about five years when we got new neighbors. They had built their house, constructed of fine sticks and rather wispy, about 25 feet up in the trees along our driveway. It was hard to get a good look at them since they were often backlit and they nested there only once. They are known as green herons, for the green that I fail to see in their plumage. Even in the best of lighting I see gray and at best a grayish-green, but I’m assured by serious birders that they can see that green!

When the young fledged they amused us for a number of days, scurrying about the yard like ‘Beep-Beep’ from the Looney Tunes cartoon that stars a roadrunner. The young raised their top feathers in mohawk fashion each time they scooted. Their mode of locomotion was to pause and then scurry a few feet as if they’d seen a ghost, and then pause and repeat. They seemed very much without objective, as if they were chased by invisible coyotes around our yard’s landscape.

They had been carefully nurtured inside their shells for 20 days and then protected and fussed over by their parents for an additional 20, so finding themselves on the ground was a new and scary experience, I suppose. They had much to learn in order to acquire the talents of herons in the sphere of snatching or spearing fish. Herons need to learn how to account for the water surface illusions caused by refraction when fishing, but in our garden they were catching insects where no such calculations were necessary.

Green herons are excellent hunters as adults and rely on expert stalking skills. But the young were untrained, unpracticed, and undisciplined, attempting to rely on reckless abandon and maneuvers that seemed to surprise them more than their quarry.

In time they would achieve the motionless stance of their adult counterparts. Typically, green herons hunt the vegetated edges of wetlands, ponds, streams, lakes, and rivers. They will rarely wade in open shallows. Being our second smallest heron—at a diminutive seven ounces—they dwarf only the least bittern, making them easily captured by large birds of prey. So being stealthy is important; surrounded by vegetation and standing still until they strike is essential to their survival. Unseasoned birdwatchers will find them to be elusive, and old birdwatchers may wish for younger eyes.

Green herons are one of a few birds that make use of lures to attract a meal. They will place a leaf on the water’s surface and wait for a curious fish to approach within striking distance, or an insect to light upon its surface. They may also employ an injured insect or stick as bait in the same manner. Like a fly fisherman they will sometimes remove it and then place it down again and again in slightly different locations, until successful. They assume a deceptive stance that gives the illusion that their neck is short and stocky. When compared to other herons I suppose it is short. But it can stretch out as long as their body when they strike, a movement that’s achieved in less than a second.

Prey can be trapped between the upper and lower mandible or even speared. Most if not all herons can swallow a prey creature one sixth of their size! Our subject species can surely handle a fish of about one and half ounces in a single gulp and I’ve seen them eat sunfish that appeared to be at least three ounces. Although that seems mighty improbable, if you don’t believe me search YouTube for Green Heron Swallows Fish FYV. This would be like a 150-pound person swallowing a 65-pound fish whole. I envision Popeye’s pal J. Wellington Wimpy downing a stack of hamburgers. (Okay, I’m clearly into cartoon memories today.)

Many species of herons nest in large colonies, but green herons generally do not. Some will have fidelity to the nesting site, returning in a subsequent season to raise their young. Sadly, ours never came back. The green heron’s nest is rather flimsy compared to larger herons that use heavier sticks, and I suspect that most probably blow out of trees or come down in snows as ours did.

In a year’s time the youngsters will be able to raise their own brood. Pairs are seasonally monogamous. The nest will be started by the male as part of the mating ritual, showing him to be a good provider and builder. His initial sticks will be larger than the others to support the nest. The female will take over the construction and he will ferry most of the primarily smaller sticks to the nesting site, which she will weave into place. The pair’s courtship begins with a fly about and ends with the male’s choreographed sky-pointing with his beak, as he snaps his mandibles together in a castanet-like staccato and stretches his neck toward his back. Green herons fly with their neck retracted as opposed to stretched out like cranes and storks.

Green herons are year-round residents from the South Carolina coast throughout Florida and all along the Gulf coast states into Mexico and all of Central America. They are year-round on California’s coast into the Baja and down Mexico’s western coast. Here in New Jersey, they are present just for the breeding season and summer and then they migrate south; the same is true for most states from South Dakota to Texas and eastward. They also breed along our eastern border with Canada.

With a pair of binoculars and some patience, you are likely to find them along our Delaware Bayshore. Happy searching!

Sources:
All About Birds, Cornell Bird Observatory
Animal Diversity Website
i-Bird
What It’s Like to Be A Bird, David Sibley