Shy as a Fox 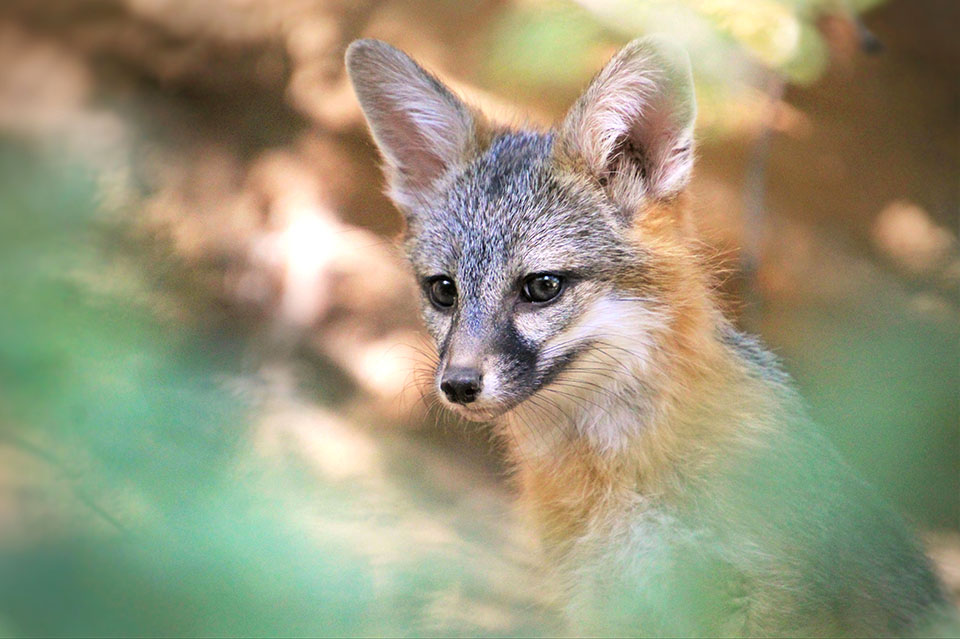 The eyes of the gray fox look like a make-up artist has applied eyeliner. Notice the black nose and round pupils. Other foxes have vertically slit pupils. Photo: Renee Grayson, flickr
by J. Morton Galetto, CU Maurice River

My parents had an old lithograph of a fox hunt over their sofa. It depicted long-legged hounds and people on horseback with English saddles. Some were off their horses just walking about in fancy attire, wearing red coats, beige pants covered just beneath the knee by tall riding boots, and top hats or equestrian helmets. Their quarry was the elusive fox.

Two foxes are native to New Jersey—the red and the gray. During colonial times red foxes were not plentiful in New Jersey. Most red fox were imported by colonists from Europe for hunts for an interesting reason. Gray fox, our common species, didn’t run as large an area and they treed themselves. You read that right, the gray fox (Urocyon cinereoargenteus) can climb trees!

Let’s discuss the “native” aspect of red foxes. In the Journal of Mammalogy researchers studying the genealogy of red foxes noted, “Although European red foxes translocated to the eastern United States during Colonial time may have contributed genetically to extant populations in that region, our findings suggest that most of the matrilineal ancestry of eastern red foxes originated in North America.” In other words there was a natural expansion of their range. Their tendency to habituation, or adjustment to human development, contributed to red fox increasing distribution.

That gray fox, however, is undeniably a longtime native to New Jersey. And gray fox don’t tolerate human encroachment. They are shy while red fox can be bold. We will save red foxes for a future story, but comparing them to some extent here will yield greater understanding of our subject species, the gray fox.

Not only do gray foxes tree themselves, but their territory is much smaller than a red fox’s home range. A red fox utilizes three to seven square miles while a gray fox has a range of half a mile to four miles and uses only a portion of the area in a day. Thus, on a fox chase the gray fox simply wasn’t providing a distance necessary for a horseback-oriented event.

Traditionally a red fox might go down a hole where riders would employ a short-legged dog like a Jack Russell to go after it. But a gray fox’s sharp semi-retractable claws and short legs allow it to climb vertically as much as 18 feet up the trunk of a tree. And since they are the only member of the Canidae family that can climb, the chase was abruptly ended. I have seen dogs in trees but only trees with very horizontal aspects. What we are describing here is an ability to climb a trunk that is perpendicular to the ground. And they can navigate downward, leaping from limb to limb or even descending the main trunk head first!

The gray fox’s shorter legs also allow it to navigate thicker cover than the red fox. When chased it can run into thickets that dogs cannot navigate, and that riders avoid as well. Today some fox chase clubs use lurers or scent trails, not live foxes. And foxes are not usually pursued once they have “gone to ground.”

The gray fox’s range is extensive in the Americas from southern Canada to Venezuela and Colombia. They are absent from portions of the Great Plains and mountainous regions of the northwestern United States (Fritzell and Haroldson-Mammalian Species).

David Chanda, former director of New Jersey Fish and Wildlife, shared that red and gray foxes are somewhat intolerant of each other. Fortuitously their habitat preferences tend to separate them. Red foxes prefer open hardwoods and field edges, while gray fox prefer swampy areas and dense thickets. This habitat suits their shy nature and makes them more elusive. Gray fox love swimming, which comes in handy in a swamp. All foxes can swim but red fox prefer not to do so.

It is very uncommon to see a gray fox. If you think you have seen one, know that red foxes have enough color variations that you might have mistaken a red fox for a gray. But gray fox have some very specific coloration differences. The most diagnostic is the distinctive black stripe along the dorsal surface of the tail and the black-tipped end; the red fox has a white-tipped tail. The gray fox’s back is mottled gray shades and their belly is creamy. Generally they have a white bib, starting at their lower cheek, then outlined in a tawny shade. Usually their eyes are dark, but they can also be blue. In contrast with other vulpes (true foxes) their pupils are oval instead of slit-like. The eyes appear as if the fox is wearing black liner, complete with a stripe of black fur extending from the outer corner. Their legs and the sides of the belly are reddish brown. Red foxes, have pronounced black socks.

Gray fox are primarily nocturnal but also crepuscular, using the twilight of dusk and dawn. Red foxes are similar but much more likely to be seen in daylight hours. Most of us will never get to see a gray. They even beat out coyotes for eluding observation.

Foxes have been trapped and also raised for their fur. The red fox has been considered more desirable in the fur trade because of its soft texture. Gray fox have a double pelt of soft fur and coarser guard hairs that make for a shorter coat than a red fox’s coat. Red fox are also considered much easier to snare, such that their fur is more readily available.

Although trapping is still a means of income for hunters it is a diminishing practice. Unfortunately red fox have found their way to the previously safe areas of barrier islands where they historically would not have existed. At times when trapping is necessary, for example to protect beach-nesting birds, it can be difficult to find people who know the art of trapping them.

Gray fox live in hollows of trees, stumps, or another animal’s burrow—often woodchuck holes. They are solitary animals except for breeding season. Both dog (male) and vixen (female) will raise the pups. Seasonally monogamous, they typically raise four to six pups where the larger red fox will raise up to nine (and some sources suggest 14). The pups will be nursed for the first three weeks and then fed to solid food. The dog will hunt and bring cottontail, voles, field mice, shrews, and birds for the family. They will also climb trees for fruit. At four months the pups will be taught to hunt; by 10 months they are independent and sexually mature, with an average adult weighing 10 pounds. Then they will disperse, setting up their own territories.

With keen eyesight, excellent hearing, and sharp intelligence gray fox are adroit hunters. It is said they can hear a watch tick or a mouse squeak at 100 yards. Although small rodents are their main staple they will eat invertebrates such as grasshoppers, and also frogs, turtles, birds, and bird eggs. In the spring fruits, nuts, and invertebrates can make up to 70 percent of their diet. Their main predator is the coyote, but eagles, bobcats, and great horned owls are in the mix, especially for pups.

Gray fox can pose threats to poultry farmers, but more often it will be a misidentified red fox that is the culprit. They can carry rabies but again they are not commonly habituated to developments like red fox and they are very skittish and shy. Although you are unlikely to see one, I hope that, like me, you’ll find it nice to know this cunning creature is part of our natural heritage.

NJ Division of Fish and Wildlife