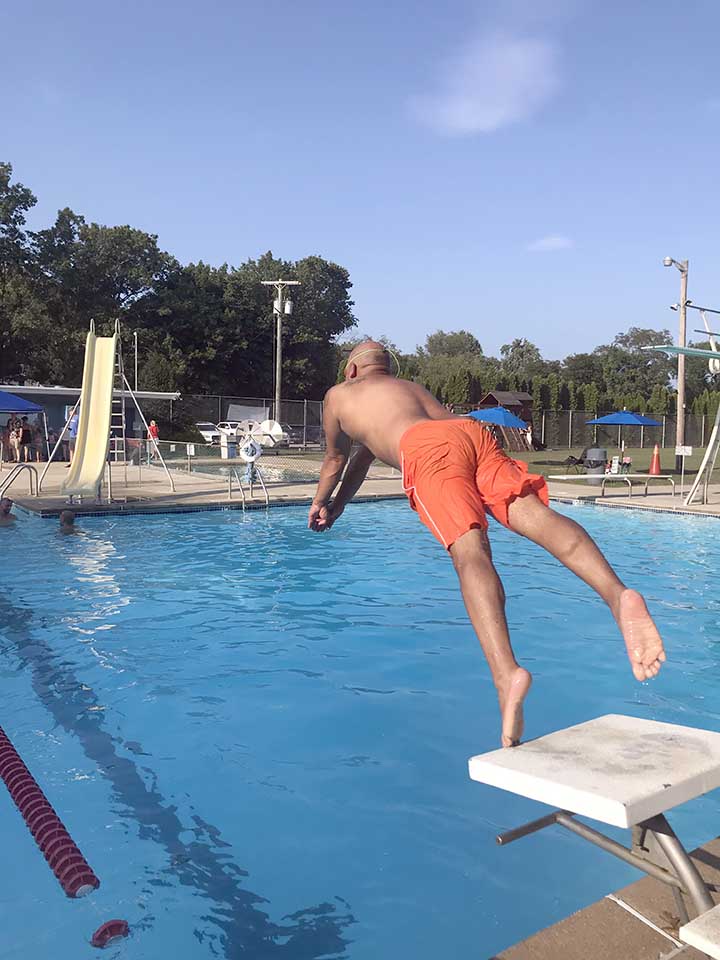 There were winners but no losers as 300 people jammed the grounds at Vineland’s Dolphin Swim Club on a sultry August evening to witness an unprecedented gathering of spirited swimming talent, enjoy an elaborate buffet, honor some key individuals from Vineland swimming history, and raise thousands of dollars for charity.

Alumni swimmers from Vineland High School (VHS), the YMCA, and Dolphin, plus some coaches, swam against each other in friendly competition—with every one of them straining to win—as fellow swimmers and the enthusiastic crowd cheered.

In that crowd were many parents whose support, coaxing, pressing, and love had helped vault their daughters and sons to their highest possible level of the difficult sport. Parents in their 60s came to watch the “kids” in their 30s.

Some participants were in or just out of college. Some were decades older. Some still swim competitively. Some haven’t been near a pool for a long time. Some were happy with their times. Some weren’t. But on this memorable night, every competitor turned in a personal best for their community and its lasting swim legacy.

“Some of them may have lost some hair and gained some pounds, but they haven’t lost that competitive edge,” said John Casadia, 78.

He was one of the honorees of the night, reflecting his almost 60 years of coaching, inspiring young people, and serving the community. (See box below).

“This is ‘Glory Days’ all the way,” said Todd Hetzer of York, PA, a former Dolphin lifeguard and Vineland High swim team member who graduated in 1990. He swam to honor his late parents who attended just about every meet he had.

The night was planned and driven by community leader Brian Lankin, 47, who was a leading high school swimmer and had coaching roles at the YMCA, the high school, and Dolphin.

Plus, he was a star of the show.

The most popular race of the evening was a head-to-head between Lankin and his “arch rival” Ben Felicelli of Jackson, NJ, who had vanquished the Vinelander 10-years ago in a college fraternity reunion swim meet. Lankin (sigh) lost again (by a touch). But he had helped attract the big crowd through his antic.

“Near the end, people were shouting, ‘Brian! Brian!’ I felt like Rocky in Russia,” Felicelli said.

“This is the Brian Lankin Vineland Olympics,” said Theresa Fabrizio, VHS Class of 1997, who was a sprinter and butterfly swimmer. “He got us all here.”

Each of the two alumni heats was a 250-meter freestyle relay with five swimmers on each team. Since many of the participants had swum for more than one of the three teams, they divided themselves up.

Then, there was a coaches’ heat of two teams, where 10 slightly older, but eminently more determined, former and current coaches got to show they were still more than capable of beating absolutely anybody in the other lanes.

“They all swam well,” said Casadia. “Some may have a little rust, but there’s still steel underneath.”

VHS alumni won the first heat, Dolphin the second, and the YMCA coaches the third, setting up the exciting final.

Then, the party began. Rob Buono of Greenwood Inn served, yes, a pig roast with multiple gourmet side dishes and Ann Cantoni of Crust ‘N Krumbs Bakery brought the desserts—custard pies, donuts, and a dozen other treats.

About 20 people who played major roles in the local swimming community for many years were honored.

Some of the crowd stayed until the pool closed; then there was an after party.

The proceeds of Swimming Alumni Night went to the Aaron Ploch Scholarship Fund. Aaron was a skilled swimmer and soccer player who passed away at age 10 in 1999 from a rare disease.

The event was quintessential Vineland—like the annual Dandelion Dinner or any other traditional event showing pride in the town and good will of the residents. But this one was in flip-flops and had a more laid back factor of about a hundred.

The great weather bathed the children, families, community leaders, and longtime friends in an atmosphere of something that almost transcended the terrible crises going on and allowed people to feel joy together.

“It was a good time to have something like this,” said Lankin. “People were just happy.” John Casadia, above, is most recognized as the man who started the Vineland High School swim program in 1973 and developed it into an aquatic superpower. His coaching resume includes a New Jersey high school state record of 489 wins, including six state championships, and more than a hundred individual and relay state wins.

In 1996, the girls swim team brought home a first ever, and still only, VHS girls state championship in any sport and his teams won four consecutive and five of six state crowns in the early 2000s. He also started the Dolphin swim team.

He retired from VHS in 2006. He shows no signs of retiring from Dolphin. Dennis DeMatte Jr. is a huge part of Vineland swimming history. After college, he was a VHS assistant swim coach for a year before taking over the Vineland YMCA Seals, which he coached for 25 years. He had to retire in 2012 because of illness.

YMCA swimmers, ages eight to 18, succeeded not by winning prominent victories—although there were many—but because of the spirit shared among teammates.

“They always swam their fastest times in the biggest meets,” he said.