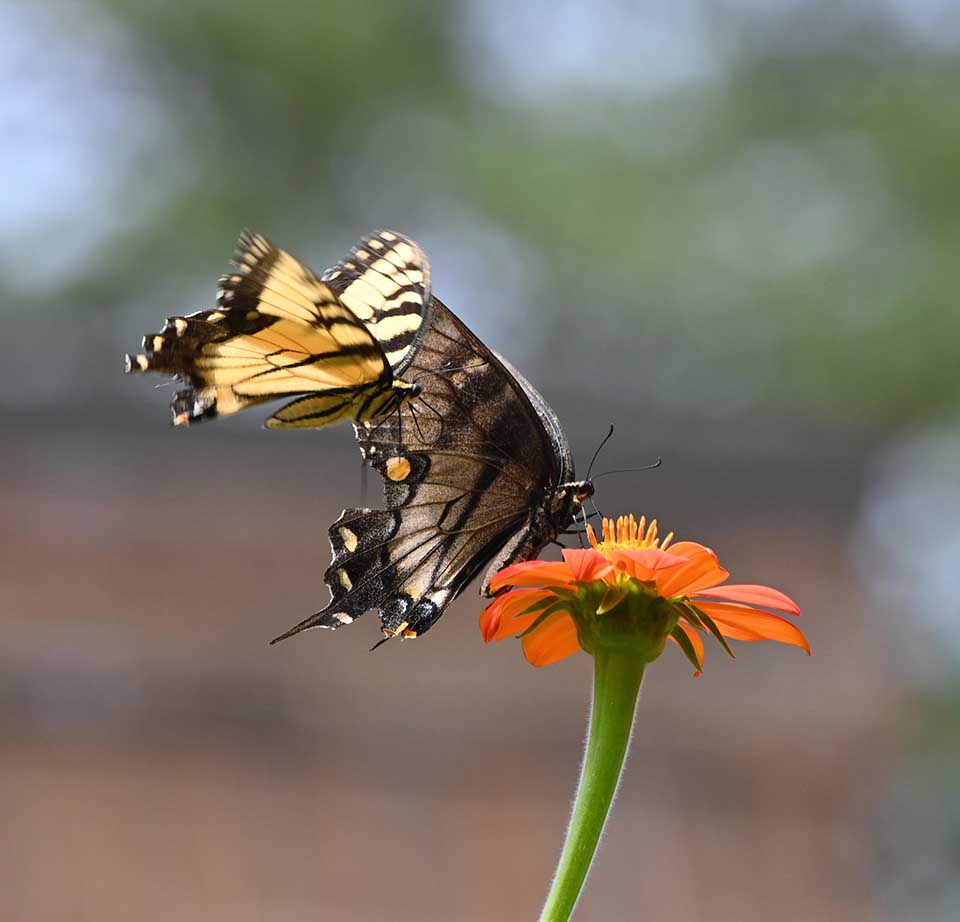 The dark morph of the female Tiger Swallowtail occurs in only about 2% of the species. Author captured on film the male flying past a melanistic female.
by J. Morton Galetto, CU Maurice River

In December of 2015 I went to India to attend a wedding. After many days of festivities we visited Pench National Park to see one of India’s most famed animals, the Bengal tiger. Rudyard Kipling’s famous work The Jungle Book takes place in Pench, located in the heart of India. The jungle is home to so many animals that we had not seen before, including langur monkeys, Malabar pied hornbills, jackals, scops owls, white-throated kingfishers, crested hawk-eagles, green bee-eaters, wild peacocks, myna birds, magpie robins, Alexandrine parakeet, crested serpent eagle, and wagtails.

We heard and saw spotted deer that alert each other to the presence of tigers with a yelped wail. Conveniently their warning calls also alert guides. When the signal is heard chaos erupts, as drivers of the open-top safari trucks jockey for position hoping to show their paying clients a tiger. Our guide explained that Indian tourists are intolerant of failing to see one of these famed creatures. Our driver decided to go off in a different direction, and in short course a tiger proceeded to follow our vehicle. Tigers, we were told, like to walk the roads in the park because the groomed roads are easier on their sensitive paws. This one was massive, graceful, just beautiful.

Admittedly in southern New Jersey we don’t have tigers, but clearly one of our flashiest butterflies is the Eastern “Tiger” Swallowtail. With its predominantly yellow coloring and contrasting black design it’s a showstopper. The upper side of the forewing has black stripes that earn it the common name “tiger.” The female’s hindwing has blue along the border, more so than the male.

However some females have a unique look—a very dark coloration. A black or nearly black hue in animals that is not typical of their species is called melanistic. In the case of the E. Tiger Swallowtail this morph is caused by a gene on the W chromosome, which is unique to the female. Michael Gochfeld and Joanna Burger cite many sources in their book Butterflies of New Jersey to help us understand this morph or variation.

The situation is thought to be one of mimicry, when an animal resembles another creature or object in nature in order to deceive a potential predator. One common form of camouflage is for young caterpillar species to resemble bird droppings, so that a bird ignores a potential meal. Walkingsticks look like thin branches. Butterflies sport “eye spots” on their hind wings to scare off small predators. In the case of larger threats a perceived eye might be attacked while still leaving the wing functional, with a hole in place of a spot. Also when wings are rapidly opened the decorative eye can cause a startle response (as can a brightly colored upper side such as that possessed by the Red Admiral), allowing a precious second or two for the prey to escape an attacker.

Batesian mimicry, named for 19th century English naturalist Henry W. Bates, refers to a benign and palatable animal looking like a dangerous or noxious species to discourage a possible predator. Many creatures’ genetics have evolved to include this trait. The harmless hognose snake flattens its head when disturbed in order to mimic a venomous species. Several species such as New Jersey’s seldom seen scarlet snake, with its red, black and yellow rings, have aposematic coloration to look like the poisonous coral snake.

In our subject’s instance, a melanistic E. Tiger Swallowtail resembles the darkly colored Pipevine Swallowtail that is unpalatable. This helps to protect it from becoming a meal. In areas where Pipevine butterflies exist more females have melanism. In fact in the late 1800s it was reported that in the Philadelphia area both morphs, the yellow and the dark-shaded females, were equal in number (Skinner/Aaron, as cited in Burger/Gochfeld).

In New Jersey we have a number of other butterflies that mimic the Pipevine, with the Black and Spicebush swallowtails and the Red-spotted Purple also relying on a likeness to this less-favored creature. However the Pipevine butterfly is essentially absent from the New Jersey Coastal Plain, with only a few reported each year in southern New Jersey. Their food plants are various vines in the genus Aristolochia or Dutchman’s pipe, and this limits their distribution. Dutchman’s pipe is not native to southern New Jersey, so only where people have planted it would you likely see the Pipevine Swallowtail. Aristolochic acid (AA) makes both their caterpillar and adult form poisonous.

Dr. Michael Gochfeld, toxicologist and ecologist, shared an article with me from Chemical Research and Toxicology that links AA to the cause of a mysterious kidney disease in Eastern Europe causing Balkan endemic nephropathy. Evidently enough of these plants are growing around wheat fields that its seeds are dispersed into wheat harvests, making their way into people’s diet. AA was used as an herbal remedy for arthritis, gout, and inflammation but has been banned by the FDA and its global counterparts because of its toxicity.

In the butterfly world another common Batesian mimic is the Viceroy that closely resembles the unpalatable Monarch, which acquires its toxic steroids from cardenolides by feeding on milkweed. A number of other insects mimic bees, including flies, beetles, and even some moths. In mammals, cheetah cub infants resemble honey badgers that are formidable opponents, thus discouraging predation (R. Eaton). On coral reefs some 60 species of fish are said to be perceived as models of other less-favored species. The human eye may not recognize them as such but the ultraviolet-sensitive eyes of fish at depths can do so.

Conversely our primary subject species, the Tiger Swallowtail, is polyphagous, or said differently, “it’s not a picky eater.” Also, the food items that it selects are plentiful so its distribution is widespread, covering all states east of the Continental Divide. The host plants for its larvae are tulip poplar, sweetbay magnolia, ash, cherry, birch, cottonwood, willow, plus others. Like most butterflies, to see them frequent your yard you will want to provide native host plants and nectar sources. Joe Pye and the non-native tithonia in my yard seem to be a hit with many species, especially Tigers.

The Tiger caterpillar’s first three molts resemble, or yes, mimic, a bird’s droppings. The fourth instar (stage in the molting process) is green with lighter shading at the bottom or “counter shading,” which helps give it less contrast against a leaf’s surface and makes it harder to see.

Caterpillars are divided into segments—a head, three forward segments called “thoracic” T1-3, and the remaining “abdominal” segments A1-10. The upper side of the T-3 has a set of false eye spots, which is a deceptive coloration that fools predators into thinking it is much larger than it is. There is also a ridge of yellow after A-1 that folds in upon itself at rest. And there are lovely blue spots on the abdominal segments.

The caterpillar is equipped with a defense mechanism found in all swallowtail larvae—a gland called osmeterium that is situated in a segment just behind its head. When threatened the larvae everts the organ, extending it upwards while emitting an odor that most people find disagreeable, and I suppose some predators do too.

With all this discussion of mimicry it is still safe to say that we won’t mistake the butterfly for a feline. But I hope I have generated some degree of excitement. My point in starting off with a safari is to suggest that our fauna here in southern New Jersey is also special—and we have tigers too!