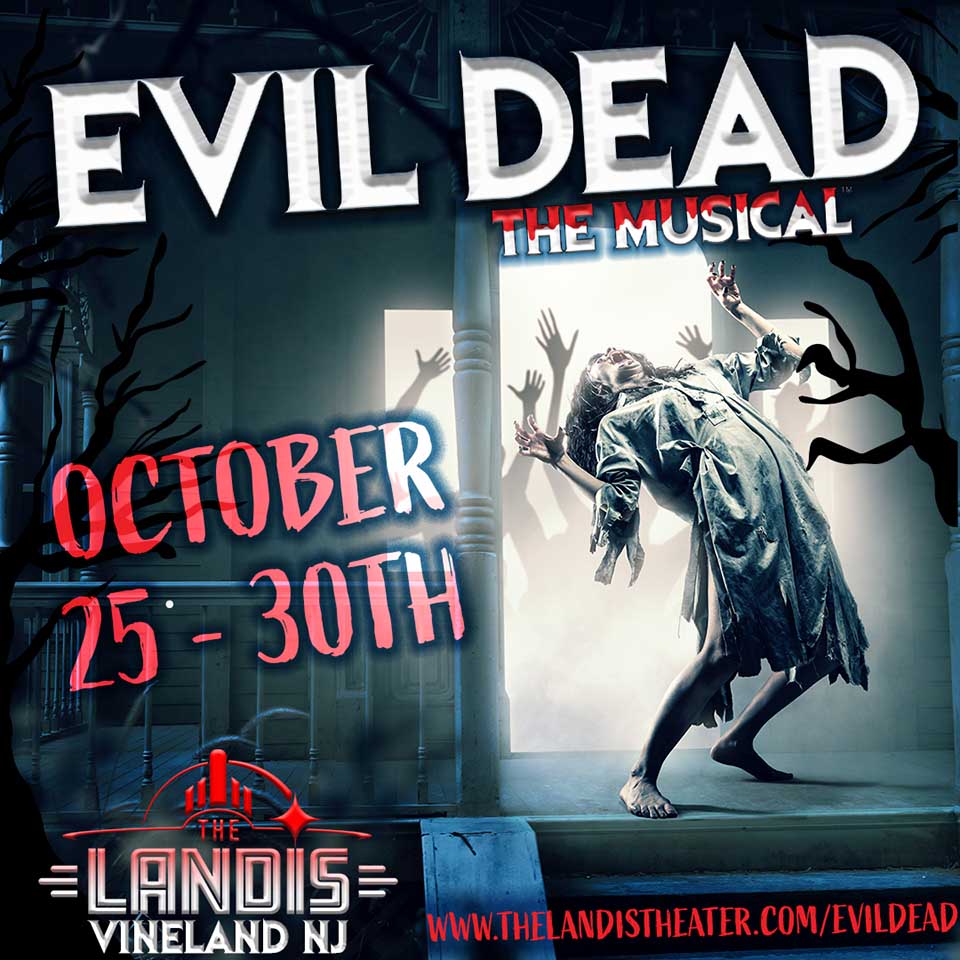 It isn’t easy running a theater these days, what with the lingering Covid-19 pandemic and all. Just ask Ray Mamrak, who happens to own the Landis in Vineland.

“It’s still tough to get people in the seats. They will stand crotch to butt at a festival or a place like Irish Weekend in Wildwood but put [them] in seats and put a roof 30 feet above their heads and there is some fear,” Mamrak says.

The antidote? Evil Dead: The Musical, perhaps. The show’s title sounds like an oxymoron if ever there is one. Not so.

Rocky Horror—stage show or film—has its campy followers singing “Let’s Do the Time Warp Again,” and dressing up like their favorite character. But Evil Dead: The Musical goes one better. A splatter zone where fake blood sprays on the audience.

“The blood splatter zone is one of the most thrilling forms of audience immersion I have ever seen in a show,” says Anthony Scarpone, who plays the lead, Ash Williams. Scarpone, of Little Egg Harbor Township, knew going in this was the role of his young career, if not a lifetime.

“I knew that I had to be a part of this show and take on the iconic role. This role has a perfect blend of farcical humor and serious tension, as well as an amazing character arc; going from your average college student to a Deadite-Killing King,” says Scarpone, who recently discovered Vineland’s treasure trove of theater.

Funny thing is, Mamrak, who directs the show, had Scarpone in mind for the lead when they met at another audition. “Finding the perfect lead always poses a problem,” he says. “But he had the role when he left home for the audition.”

Since its opening in 2003 in Toronto, Evil Dead: The Musical has done well at the box office. In total, there have been over 500 productions around the world—from Seoul to Madrid to Tokyo to Las Vegas to Cleveland to Norfolk to Toronto to New York. What does that say about the public appetite for this kind of musical theater?

“People want different,” Mamrak says. “They want fun and to poke fun at these scary, but campy, films with an even campier musical. It’s addictive. Well worth the drive from anywhere and better than spending another Halloween holiday night in yet another bug-ridden corn maze, hayride, or walk through a haunted house.”

Where Rocky Horror came to life as a campy farce, The Evil Dead did not; it was one of the most horrific slasher movies at the time, and of course, it spawned several sequels. If you saw the original film, you know that five college students go to an abandoned cabin in the woods, and accidentally unleash an evil force that turns them all into demons. Ash, brandishing a chainsaw, saves the day. The musical took three films and created a solid story filled with the hilarity the final film, Ash Vs the Army of Darkness, brought to the series. Like any good slasher play, blood flies, limbs get dismembered, demons tell terrible jokes. All of it set to music.

“The songs just add to the insanity with lyrics that are addictive and gut busting,” Mamrak says. “It’s more akin to a comedy show with Gallagher smashing watermelons into the audience. It also has its own special dance in the song ‘Do the Necronomicon’ It’s like the time warp. Only better! If they don’t leave with blood splatter on their clothes, they will leave with pee in their pants from laughter. So basically, come wearing clothes you’re not too attached to and a nice absorbent diaper.”

If you are expecting the musical to scare you like the film, you’ll be disappointed. And the entire cast, from New Jersey and Pennsylvania, are amazing, Mamrak says. Take Scarpone. He’s performed with the Cumberland Players as Ram Sweeney in Heathers: The Musical and with the Off Broad Street Players as Angie the Ox from Guys and Dolls. He first developed an interest in acting in the seventh grade. His passion grew from there till now where he’s enrolled at Stockton University pursuing a degree in performing arts and topping the bill in an iconic production.

“This form of musical theater is extremely fun to be a part of due to the devotion of the fan bases of the Evil Dead series,” Scarpone says. “Knowing that the audience is aware of Bruce Campbell’s iconic lines and mannerisms, it becomes a privilege to research the role and do the performance justice. Similar to Rocky Horror, the constant fourth wall breaks, and audience interactions are a great way to immerse the audience in the show.”

What: Evil Dead: The Musical plays the Landis Theater

When: Daily between October 25 and October 30.