It’s the self-proclaimed title of Don Haynes, who ended his run short of his goal—or did he? 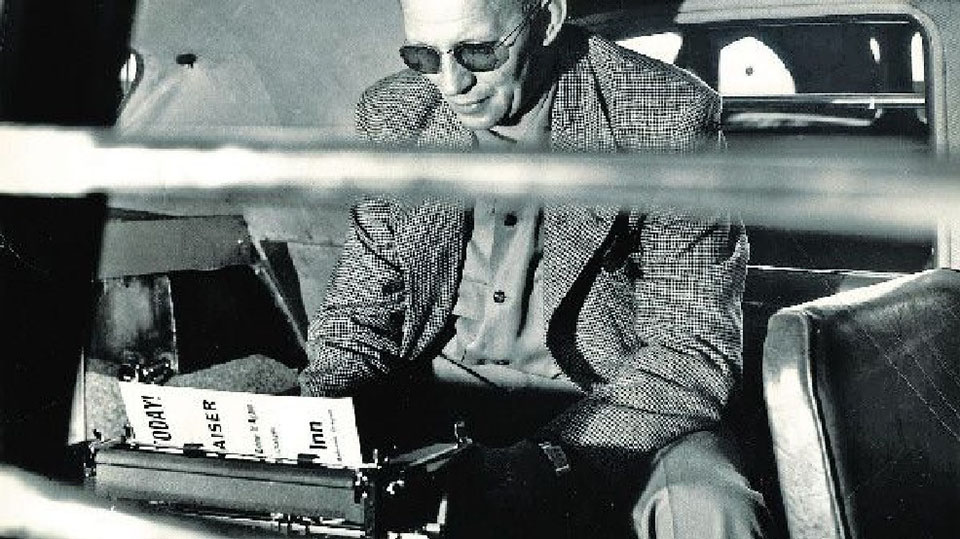 In April 1950, two weeks before the deadline for his $25,000 bet to visit all 48 states in 14 months while sealed in a Kaiser DeLuxe automobile with its doors welded shut and its windows barred, Don Haynes, the Ashland, Oregon resident and self-proclaimed Marvel Man, ended his run short of his goal. Whether or not he paid his challenger is only one of the mysteries that surround this curious event that earned considerable media attention at the time.

In 2009, an Oregon newspaper, the Medford Mail Tribune, did some sleuthing that turned up some interesting information about Haynes and his cross-country trek. A local historian from Ashland had traced a batch of recently surfaced photographs of Haynes seated in the Kaiser to the photographer who had captured those moments in 1949, Otis Roley, who ran a gas station in Grants Pass, Oregon at that time. Roley revealed that “Haynes rented a room in Grants Pass and worked for him one summer.”

The Medford Mail Tribune,’s research showed that “The Daily Tidings reported in 1949 that 2,500 people attended a “sealing ceremony” in Ashland before Haynes roared off toward California with a police escort. Roley remembers Haynes being sealed in at his gas station, with about 100 people in attendance.

Roley also reported that Haynes “got the car from a Kaiser dealer,” yet other accounts have him purchasing it “directly from the factory,” according to a 2014 Hemmings Motor News article, which calls the official explanation for Haynes’s trip “a little far-fetched, given his stops at Kaiser dealerships and some accounts describing his trip as a publicity stunt to tout the new-for-1949 Kaiser automobile’s comfort.”

Another report that counters Roley’s statement about Haynes purchasing his vehicle from a local dealership is mentioned in the Medford Mail Tribune, article: “Jack Mueller, of the Kaiser-Frazer Owners Club International…says Haynes went to the Kaiser factory in Willow Run, Mich., for the car, and arrangements were made to have the Marvel Man stop (for a fee) at dealerships.”

What may not be commonly known is that Haynes did not take to the open road alone. The Hemmings Motor News article writes that “Haynes reportedly had another car accompanying him to set up his appearances, keep him fed, and tend to the Kaiser’s mechanical needs.” The June 22, 1949 edition of the Vineland Times Journal not only confirms this, it illuminates who was in the second car.

“Accompanying him in another car of a more conventional design,” the newspaper reported following Haynes’s brief visit to Vineland, “are a California couple, Mr. and Mrs. Charles Lislie…who arrange for Mr. Haynes’s radio and TV appearances.” The article also reports that while the couple enjoyed hotel facilities on the road, Haynes remained in the parking lot outside.

That last point may be a bit suspect if we take into account Roley’s statements published in the Medford Mail Tribune. According to the article, “Roley remembers the car as having removable floorboards, ostensibly so that Haynes could stick his feet through and walk the car for exercise.” In an e-mail to the Ashland local historian, Roley commented, ‘I think he told me that he was able to slide out when he had car trouble and needed to shower and clean up.”

As for claims about Haynes’s rear seat folding into a bed, Hemmings Motor News reports that “the only folding back seat available in a 1949 Kaiser was on the Traveler pseudo-station wagon, and photos of Haynes’s Kaiser clearly show it to be a regular four-door sedan.”

According to the Medford Mail Tribune, “Haynes returned to the Rogue Valley [in Oregon] in March 1950 saying he’d lost track of his advance publicity man and given up just short of his goals.” While some may see this as an end to a 14-month journey, Haynes saw it as the first phase of a new career.

Next Week: On the Road Again