Hold one and it feels like a heavy glob of Jell-O— but it’s harmless and doesn’t sting like a jellyfish. 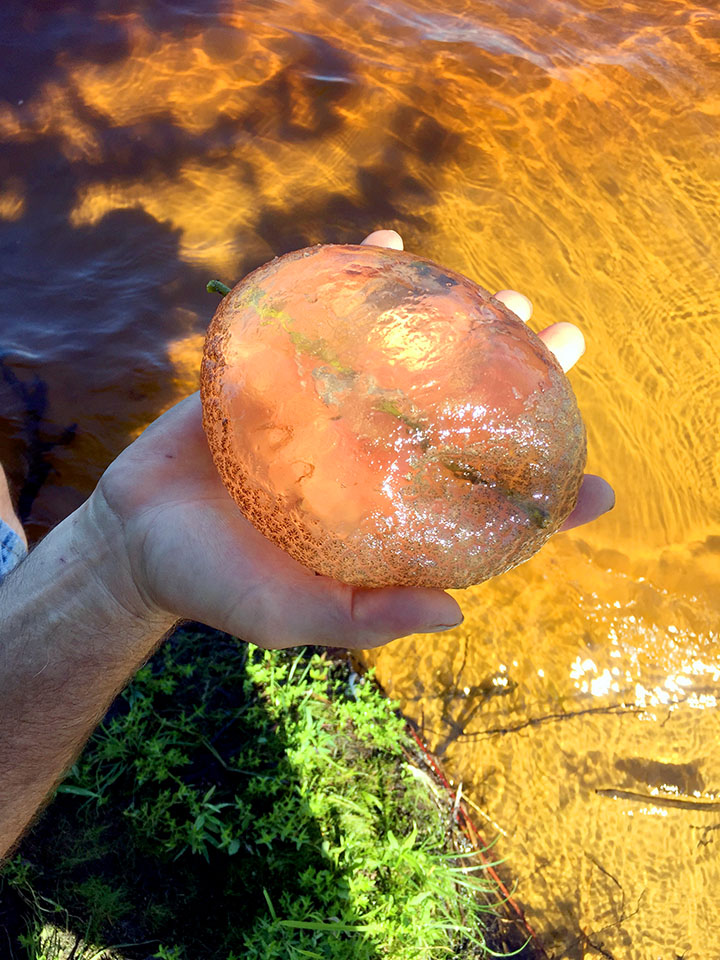 Bryozoan found at Union Lake. Rosette-like patches can be seen on side where sun is not as reflective. PHOTO: DAVID LOWENSTERN
by J. Morton Galetto, CU Maurice River

Each year I am asked about the strange gelatinous masses that people see in our local lakes. These blob-like creatures range in color from clear to yellow or green, but most that I see are a bit rusty in color. Many people mistake them for frog egg clusters. They are actually a freshwater colonial microscopic cluster of invertebrates called a bryozoan Pectinatella magnifica or magnificent bryozoan. Their native range includes New Jersey, and they are found in the U.S. from the Great Lake southeast of the Mississippi to the Atlantic coast. Bryozoan are sometimes called “moss animals.”

Not only are they native but the species has lived on earth for over 500 million years.

At the end of October, I was on a nature walk with some friends and we saw one in the pond at Waltman Park in Millville. To me the collective mass of attached animals looks sort of like a transparent brain. They adhere together, making a surface pattern that biologists refer to as rosette-like patches. People have sent me photos from Union Lake and asked me to identify “this blob I found.”

When you hold one it feels like a heavy glob of Jell-O. It’s harmless and doesn’t sting like a jellyfish, which is the way many people describe their appearance. Magnificent bryozoan are beneficial in that they are filter feeders, consuming suspended organic material, zooplankton, phytoplankton, and algae. Each microscopic zooid in the colony is a horseshoe-shaped structure with 50 to 84 hair-like tentacles for filtering food from the water.

They can improve water clarity and thrive in cleaner environments, and normally they are not found in conjunction with pollution or suspended solids. They have very limited mobility; en masse they do propel themselves using their tentacles but the movement is so minuscule that it is not perceivable.

Bryozoan also prefer slow-moving water, so lakes and ponds are more likely habitats than fast-moving streams. They are a food source for fish, snails, and insects.

Each zooid’s single orifice serves for eating and secretion. Bryozoans lack a respiratory, excretory, and circulatory system. They have a central nervous system that responds to stimuli. The zooids attach in groups that surround a gelatinous material filled with water produced by their secretions, so that their mouths surround the outside of their connected colony. Although they are microscopic, and in mass they can be small, many exceed the size of a football and they can be as much as two feet in diameter.

In my limited experience I have noticed them to be baseball- to football-sized. Their shape is varied but each seems to have limited uniformity. Their growth period is from early summer to early fall.

When water levels and/or temperatures drop they are often left high and dry. Without submersion they dry up and die. At this point statoblasts are exposed; these are masses of cells called “survival pods.” From these cells they reproduce asexually by a means unique to bryozoans. The pods are visible and look a bit like the grains in stone-ground mustard.

Since 1960 the magnificent bryozoan have been showing up in many regions west of the Mississippi where they are classified as cryptogenic species, meaning neither clearly native nor exotic. According to the U.S. Fish and Wildlife Service they are now in Washington, Oregon, Idaho, and Texas. It is believed that birds carry survival pods in migration on their feet. Recreational boat hulls also transport them from native waters to non-native sites.

Canada now has colonies where they did not formerly exist. Since they thrive in waters 60 degrees and above it is thought that the spread to new areas is indicative of global warming in tandem with a growing tolerance for colder temperatures. Once native to North America, they are now appearing as far away as Europe and Asia.

This is not always a welcome invasion. Although they may perform some helpful functions, most people find them rather revolting. In fact, articles refer to them with such labels as “Snot Monster” and “Alien Pod,” plus other disparaging comparisons. En masse they often cause problems at facilities that have water intakes, like power plants, and removal can be a 24-hour job.

Conversely, bryozoans contain a number of useful chemical compounds that are used in the production of a drug called bryostatin, part of a group of anticancer drugs studied at the National Cancer Institute. They are also being studied for possibly treating Alzheimer’s.

Once again, that which we don’t understand often repels or even revolts us, but on closer acquaintance we might start to warm up to “The Blob” and to many other oddities of nature. We might even consider them magnificent!