A chipmunk’s expandable side cheek pouches can cram up to nine acorns in a single load. 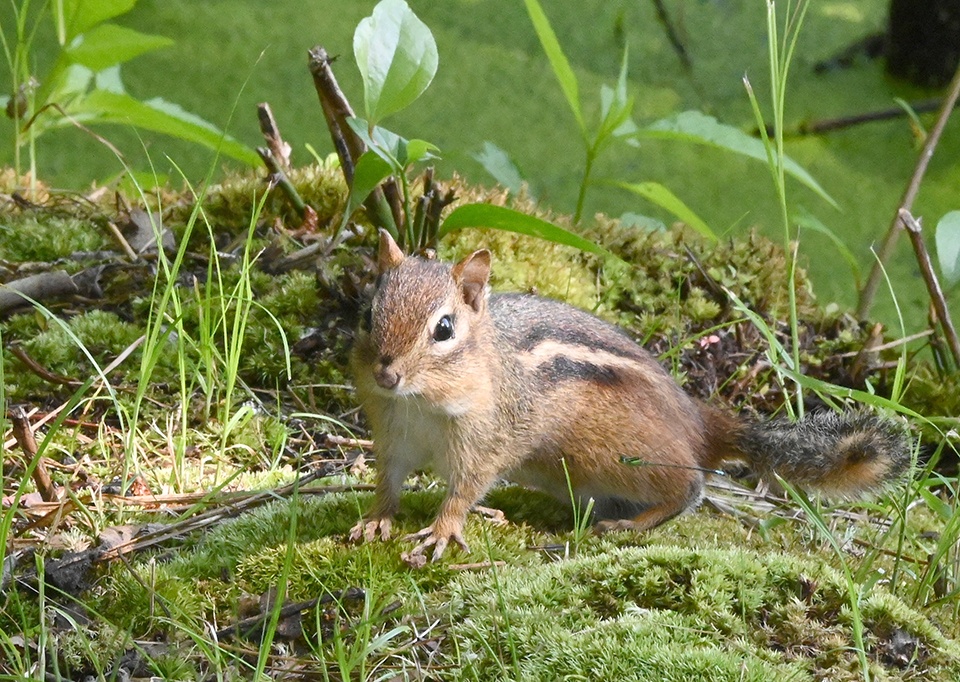 Recently, I went for a meander at Hankins Pond in Millville. Some chipmunks were busy collecting nuts to cache in their den, making trips back and forth. And as the mind often works, their activity brought back recollections of my childhood visits to my great-aunt’s cottage on the outskirts of Woodfield, Ohio. My then-85-year-old Aunt Vera was a chipmunk’s patsy. She was fully trained to leave a few morsels outside for her striped guest.

After leading her furry friend on, Aunt Vera would get annoyed when he would take to short residential visits in her screened porch whenever the outside meal delivery was not timely. She employed an empty metal wastebasket with steep sides for his transport back to more suitable habitat. The tin cylinder was placed next to a bench with some peanuts scattered in the bottom. Once the rodent mustered the courage to leap into the slippery-sided trap, he could not escape and she would usher him outside. This means of transport would be repeated if his outdoor meal was not forthcoming, since he’d simply keep coming in for it. It was lucky for my aunt that she was trained by a chipmunk and not a bear.

Eastern chipmunks are native to our area and beyond. Their scientific name is fitting: Tamias striatus. Tamias has Greek origins and means steward, treasurer, or housekeeper; striatus means striped. Steward describes their planting/seed dispersal and treasure/housekeeper their hoarding habits and chambers. Striatus refers to their pelt. A translation might resemble this—striped hoarding housekeeper.

These creatures are diurnal and mostly active in the early morning and late afternoon. Toward the end of summer they must go into high gear stockpiling food. Since they don’t store fat they can’t truly hibernate; rather, they have periods of torpor in which their heart rate decreases as low as four beats a minute (normal is 350) and body temperature lowers to 40 degrees (normal is 94°). They must awaken from this state rather frequently to eat from their cache.

Let’s emphasize their size in order to highlight their most amazing attribute. An eastern chipmunk is about five to six inches with a three- to four-inch tail that is hairy but not bushy. It has two buff-colored lateral stripes outlined in black. Its ears are rounded and about 3/4 of an inch.

Some chipmunks can carry a load as large as themselves. Their expandable side cheek pouches can cram up to nine acorns in a single load (MO Dept. of Conservation). The advantage of hiding your meal is that it prevents theft. I imagine in order to match this feat a human would have to pop about nine huge apples in his cheeks at once; that’s four on each side and one in the middle! Accounts have the busy creatures collecting as many as 165 acorns in a day prior to winter denning.

These perilous trips mean a lot of opportunities to be observed by predators and conspecific competitors (fellow chipmunks). Chipmunks have a propensity for theft of peers’ stashes and the multiple outings make it rather easy for a thief to identify an entrance hole. What ensues can be quite a battle. I highly recommend a three-minute BBC video clip called Chipmunk Acorn Wars. Simply enter the title in a YouTube browser, look for the BBC insignia, and prepare to be amazed.

Chipmunks den in solitary. A chipmunk’s main burrow is 20 to 30 feet long and may be as much as three feet deep. A nest is centrally located with side chambers for hoards of food, lower niches for drainage, and even latrines. Their winter den’s stash of nuts and acorns is often enough to fill a bushel; they begin their winter sleeping atop the pile of food and by spring they are on the bedroom floor.

They are omnivorous, thus their diet includes fruit, seeds, nuts, insects, earthworms, slugs, birds’ eggs, and mushrooms. They are important dispersal agents for seedlings and spores of fungi, including symbiotic mycorrhizae for trees, meaning essentially fungus that plays an important role in plant nutrition and soil biology and chemistry, primarily in root systems.

In the late winter, year-old females commence their first breeding season, which lasts until about April. A second season begins in June and ends around August. Gestation is a little over a month, with the average number of pups in a litter around five. Their young are born hairless and are the size of a jelly bean. After about 40 days they are weaned and in two months are independent. Their lifespan is eight years but most will perish much sooner because they are on a lot of predators’ menus. Feral cats, foxes, weasels, coyotes, raptors, raccoons, red squirrels, and more find them delectable fare.

Chipmunks tend to live their lives in a rather small radius—around 80 feet—from their den. With the exception of prowling lustful males, their territory is generally about 2 1/2 acres. So if you see one you may have a good chance of seeing it often, unless it was taken for some predator’s lunch.

Admittedly, chipmunks can sometimes become pests. Feeding them as my aunt did is one sure way to have them change from an amusing critter to a small terrorist. Still, people can enjoy some hours of entertainment with our little forest performers.