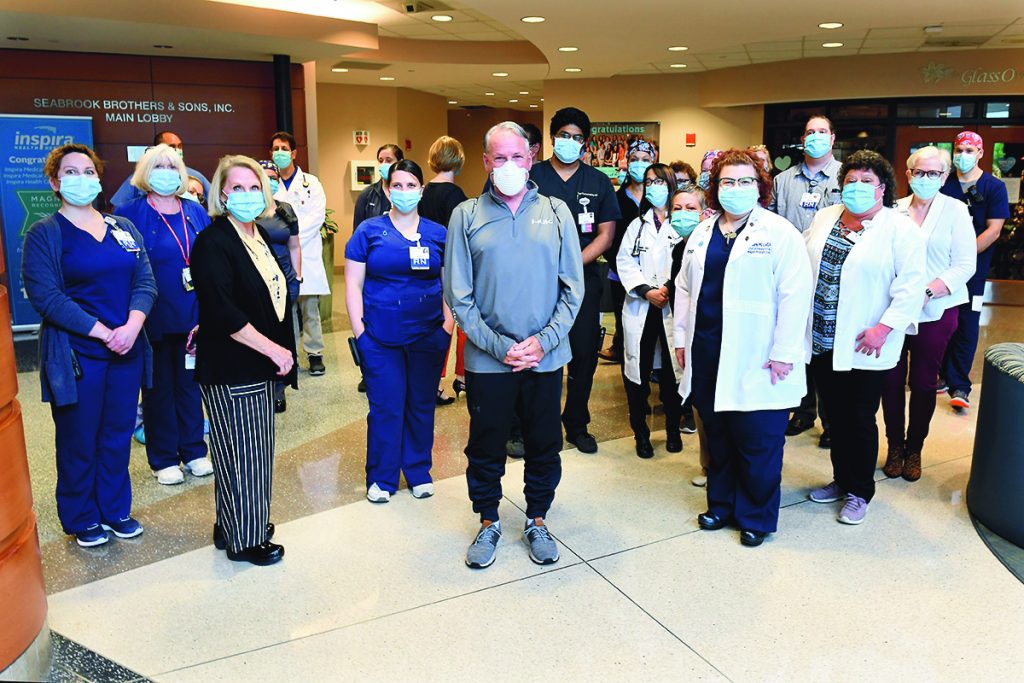 It was May 11 when Daniel Hickey of Pittsgrove Township began experiencing symptoms that raised suspicion he might have COVID-19. Although a test confirmed it a few days later, his symptoms were mild enough that managing them at home was reasonable. Hickey was sure he could ride it out and would soon feel better, even as his symptoms progressed.

The cough worsened and his fever began to spike. When speaking became difficult, he knew he couldn’t beat the virus alone. On May 23, he was admitted to Inspira Medical Center Vineland.

Within 48 hours he was feeling much better. Then he received Remdesivir, the antiviral medication that received emergency FDA approval for the treatment of COVID-19 just weeks earlier. He continued to improve rapidly. Just five days after being admitted, Hickey was feeling “great,” and one day later he stepped out of the elevator and into the hospital’s main lobby where he was greeted by nearly two dozen Inspira staff, leadership and physicians. His voice was strong as he addressed those who assembled to wish him well. In keeping with hospital policy, he wore a face mask, and staff refrained from the hugs and handshakes they wanted to offer. Despite these limitations, the smiles were “visible,” and the feelings of triumph and joy couldn’t be missed.

Hickey thanked the “doctors, nurse, everyone” and called the care he received “amazing.”

“You were relentless, you didn’t miss a beat. It was a whole team effort. I had never been here before but it was amazing,” said Hickey. “It’s a great day.”

Despite the grand send-off, Daniel Hickey’s discharge from the hospital was not quite complete. To make it official, he had to walk outside, take a breath of the warm spring air, and be reunited with his wife, Kellie.

Daniel Hickey of Pittsgrove (center, in top photo) surrounded by members of the care team and hospital leadership on hand to provide a joyful send-off. Hickey reunites with his wife, Kellie, after he spent six days in the hospital receiving treatment for COVID-19.

Reopening Guidance from the CDC cdc.gov/coronavirus/2019-ncov/community/reopen-guidance.html