Glades Wildlife Refuge in Downe Township is a good place to reconnect with our senses and our fellow creatures on the planet. 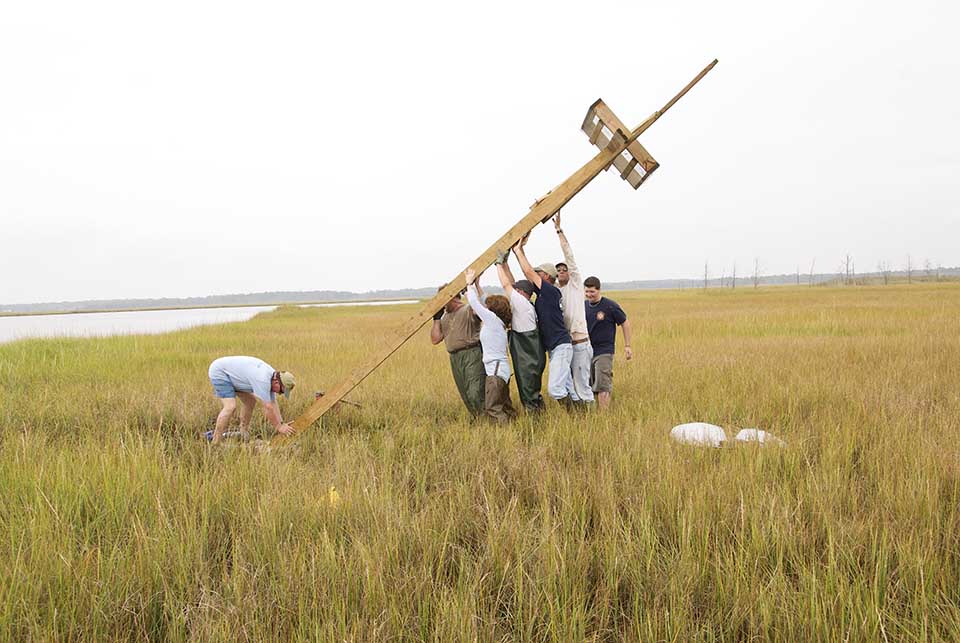 In September 2008, CU volunteers put up a nesting platform on the Glades Wildlife Refuge, adjacent to Tatnall Starr Trail, with a view of Sheepkill Pond from ground level. Photo BY AUTHOR
by J. Morton Galetto, CU Maurice River

April 24, on a sunny day with a light breeze, my husband and I visited one of my favorite spots—the Natural Lands’ Tatnall Starr Trail in Downe Township, just west of Fortescue. It was as idyllic a day as I can remember, temperatures in the high 60s and no bugs, an excellent Orthodox Easter Sunday.

We entered the woods on Russell Lane, a gated dirt path just off Fortescue Road. The Russell Lane portion of the trail is pretty much poker-straight until you veer off at the end to the right in order to make your way to the marsh. It is well maintained, but a waterproof shoe or boot is a wise choice as conditions can vary on how much water is present. The path ends at a viewing platform with great vistas over Oranoken Creek to the north and east; the opposite side of the creek is the eastern treeline that borders Turkey Point Road.

The trek is flat and about a 1.5 to two-mile round trip. There is another trail entrance just west of the Russell Lane access where the path is narrow and more winding. These trails are but a small section of the 7,440 acres that make up the Natural Lands’ Glades Wildlife Refuge. This is a diverse habitat that borders the New Jersey Delaware Bayshore, consisting of tidal marsh flanked by forested swamp and uplands. The grassy marshes filter water and provide protection to shorelines and uplands from erosion and flooding. Portions are famous for their old-growth primeval forests.

Our timing couldn’t have been better; the trees were not yet leafed out, allowing for better views of a mixed flock of neotropical migrants that were flitting about. My thoughts drifted to the Central American climes that they had likely just recently left—their winter homes. But for nesting they travel to northern woods like ours, and farther north. Here predators are fewer and food sources on which they feed their young— primarily caterpillars—will hopefully be plentiful.

We heard and saw many gray-blue gnatcatchers looking at us with their spectacled white-rimmed eyes. Their needle-like beaks were probing about while their nasal squeaky ramblings were busy scolding us to move along. We made out the clear sweet calls of no fewer than three prothonotary warblers who seemed to be competing for the females, each one attempting to out-sing the other. Black and white warblers were actively working the tree trunks in their zebra-like plumage. The flash of a cardinal’s scarlet feathers was unmistakable, and his Flash Gordon ray-gun chortle, often described as “chur, chur, chur, chur,” rang out clearly over the forest floor. (If our President can say “malarkey,” I can surely summon memories of mid-’50s TV drama, yes reruns!)

On the trail blue azures darted about. I couldn’t really focus on these butterflies; I just saw the blue flashes. More skilled eyes than mine might see where they alighted, but for me they were simply wisps. I spoke to Natural Lands Preserve Manager Brian Johnson and quizzed him on the lepidoptera, saying, “I’ve always called these specimens ‘spring azure.’ ” He told me there are four species in our area, the common names being spring, summer, blueberry, and holly azure. The catch-all name is often spring, and only an expert can tell spring and summer apart, primarily under the close scrutiny of a microscope.

The beginning of the trail is bordered by hardwood swamp with technically no uplands, although most might consider parts of it to be such. A brown butterfly that looked much like a hairstreak, without the tail on the hindwing, held its wings closed while resting; Brian identified it as the Henry’s Elfin. These tiny brown beauties have a lighter-colored border visible only while viewing with binoculars. When the forested trail changed to tidal marsh a mourning cloak flew past. I welcomed a slower, more easily identifiable species!

As we approached the marsh plain the cries of eagles and osprey protesting each others’ presence became more prominent. A number of eagles were cackling incessantly with their high-pitched “kee- kee- ki- ki- ki- ki- ki.” Ospreys, not to be outdone, echoed back their piercing whistles. As we exited the wall of phragmites onto the open marsh I spied the Y-shaped osprey platform, an old friend of sorts.

We CU volunteers raised the platform on the shores of what is called Sheepkill Pond, a lovely large tidal pool, about a quarter mile across and half mile long, some 14 years ago on a late September day. We were hopeful that in the spring of 2009 it would attract a young pair of osprey. It did not disappoint. On this most recent visit we were surprised to find the osprey already incubating eggs. In spite of the many eagles that were cruising about, they persisted.

I remember one year, when Tony Klock accompanied me here and kindly carried the ladder for a chick banding, we were attacked by greenhead flies. The entire meadow was being strafed by low-flying seaside dragonflies. When they discovered that we were on the greenheads’ menu they began to pick them off us one at a time. It was amazing.

Just adjacent to the osprey nest is a bench on a boardwalk, provided by Natural Lands for visitors to enjoy the majesty of Sheepkill Pond and the vast surrounding marsh. I decided to sit and reflect on the efforts of so many volunteers to restore osprey and eagle populations in our area.

For a time the raptors’ scuffles subsided as a great egret stood poised to snatch some watery quarry. A flock of dunlin flew by and all seemed right with the world. A red-winged blackbird beckoned me to admire his bright epaulettes as he raised the red feathers of his coverts to show off for prospective females. “You’re wasting that on me,” I thought. “But I’m appreciative just the same. Good luck.” In those moments the worries of the modern world seemed far away, and I was grateful. Being courted by a blackbird seemed normal.

The best thing about a tidal marsh is its daily and seasonal changes. The water washes over the mud and grass twice daily as the tidal cycle moves nutrients over the surface. It is a giant nursery for fish. An osprey family will need six pounds of them a day as it grows, and the nursery will need to be productive for both the osprey and eagle, plus so many others. For those who use the marsh, the health of this environment is a necessity that must be understood and protected in order for them, and us, to survive.

Today rising waters are a sign of how we treat our planet. Our behavior drives our collective outcome every bit as much as it dictates life for the creatures of the marsh. We are all one on this planet. There is no place that I feel this more keenly than on the shores of the New Jersey Delaware Bayshore.