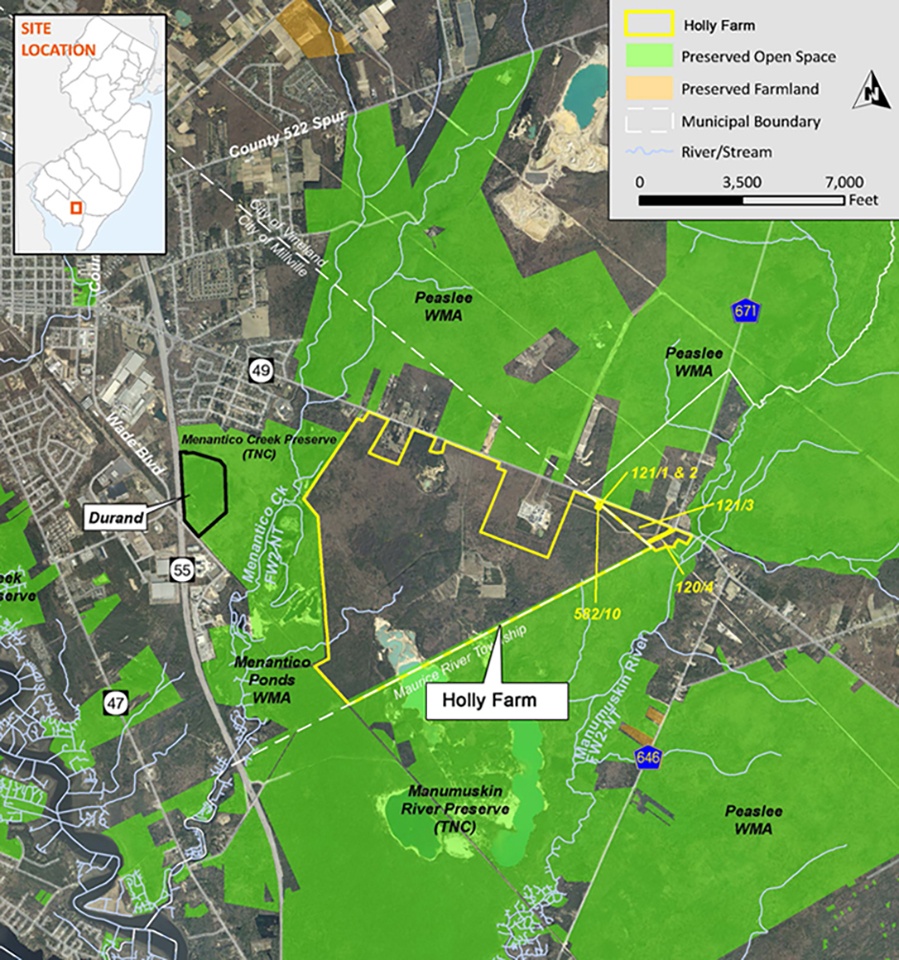 Christmas came early this year for residents of Cumberland County and throughout the state. Last week, three days before Thanksgiving, Governor Phil Murphy’s office issued a statement that the New Jersey Department of Environmental Protection (DEP) has agreed to purchase a 1,400-acre Cumberland County farm to be preserved as open space. The acquisition is being hailed as one of the most significant land deals in DEP history.

Here’s why: The property, owned by Atlantic City Electric and known as Holly Farm, is situated between Menantico Creek and Manumuskin Creek, two federally designated Wild and Scenic rivers. The acreage includes an area that the DEP has deemed a National Heritage Priority Site and represents some of the best remaining habitat for rare plant species and rare ecological communities in New Jersey. The site at Holly Farm is habitat for seven rare plants including the sensitive joint-vetch, a federally and globally protected species. The acquisition of the property will also directly connect to two Nature Conservancy preserves that will be donated to the DEP. In total, these additions will expand the preserved Menantico Ponds Wildlife Management Area by more than 5,500 acres. Financial terms of the agreement will be made public when the purchase is finalized.

“The prize plum that has eluded us for so long has become a reality,” said J. Morton Galetto of Citizens United (CU) to Protect the Maurice River, to CU members last Monday. “After 30-plus years of CU Maurice River’s intense advocacy, the Governor, the NJ DEP, and Atlantic Electric have made this monumental addition to the surrounding preserved lands a reality.”

Those 30-plus years have included threats from developers who would have changed the landscape—including proposals for a coal plant, senior housing/golf course development, turf farm, and solar fields.

Jeff Tittel, director of the New Jersey Sierra Club, recalls: “In 2010 this property was sold off … to a politically tied developer who wanted to pave it over with 900 units of senior housing and a golf course. “This is a major victory for open space and preservation,” Tittel continued. “Now it will be preserved forever as open space. DEP’s purchase of Holly Farms is a great deal for New Jersey and open space.”

Atlantic City Electric purchased the property in the 1980s for the purpose of constructing a power plant. A decade later, it abandoned those plans and declared that the property was no longer “used and useful” as utility property.

As recently as days before last week’s announcement, Tuckahoe Turf Farms was vying for purchase of the property.

Proponents of the sale to DEP, however, emphasized the need for “bridging” contiguous parcels of preserved lands. Said Department of Environmental Protection Commissioner Catherine R. McCabe, “Preservation of this property protects an important wildlife corridor and eliminates the risk of development to a scenic and ecologically sensitive region.”

“This [acquisition] achieves the twin objectives of supporting the economy through advancing nature-based tourism and improving and preserving our environment,” said Eric Stiles, president and CEO, New Jersey Audubon Society.

DEP records have documented the existence of the threatened Pine Barrens treefrogs, pine and scarlet snakes, corn snakes, barred owls, red-headed woodpeckers, Cooper’s hawks, and the dotted skipper butterfly. The property provides habitat suitable for timber rattlesnakes and Cope’s treefrogs and is the nesting and foraging area for 71 species of breeding birds and nine species of migratory birds. Additionally, the area has been deemed a critical nest buffer and foraging habitat for bald eagles, least tern, and ospreys.

After the news was out last Monday, the CU Maurice River office received many congratulatory comments from CU members and others for the local organization’s efforts in preserving the parcel.

“Congratulations CU Maurice River. This is fabulous news and very uplifting to read,” wrote one member. “CU is a true champion of the environment and it is wonderful to know that your efforts have been recognized and validated this way. I thank you on behalf of my children!”

From Kathy Fenton Wagner, daughter of holly farmer Daniel Fenton (see story of Fenton’s ownership on page 13): “Thank you so much for your work on behalf of CUMaurice River in preserving this incredible tract of land. My cousin Bill Fenton forwarded your press release to me this afternoon. My brother, Daniel Fenton Jr., and I spent many happy hours running around the hundreds of American holly trees on the property and ‘helping’ our mother in the Holly Gift Shop. Although I’ve moved out of Millville, I’m in the area often to visit my brother, ride around South Jersey woodlands and wetlands and hike the trails, and every time we pass the entrance to ‘dad’s place,’ I keep hoping for a miracle—and you and your dedicated colleagues have made that happen. What a great Thanksgiving gift for Daniel and me! Please extend our thanks to everyone for this great news—long-awaited and well-deserved.”

In addition to CU members, Morton Galetto thanked New Jersey Audubon Society, New Jersey Conservation Foundation, and Association of NJ Environmental Commissions “who have, with the expert representation of the Columbia Enviromental Law Clinic, opposed many plans that could have destroyed the property and its special environmental values.

“Many other organizations have helped over the years,” she continued, “especially The Nature Conservancy, the New Jersey League of Conservation Voters, Pinelands Preservation Alliance, American Littoral Society, the Great Egg Harbor Watershed Association, and the NJ Sportsmen’s Federation, to list only a few.”

“We look forward to working with the local people and having [NJ Division of]Fish and Wildlife use [the property] to its best potential,” added Morton Galetto. “The big picture is this really amazing win for the city and the state.”

Clarence Wolf looked out his office window one late afternoon to see one of his workers drive by with a load of holly. Curious, the then-president of New Jersey Silica Sand Co. dashed outside to find out where the man has found the berry-laden boughs.

The answer would one day result in Millville holly not only decorating the White House and hundreds of other homes during the holidays, but growing all over the world.

In fact, Wolf’s curiosity that day sometime in the 1930s earned Millville the designation, “The Holly City.”

Wolf’s worker had cut the holly from hundreds of native trees growing on the Silica Sand property. And Wolf, a religious man who had come to Millville in 1918 as principal of Millville High School, decided to send boughs of holly to his customers nationwide instead of the customary cigars or whiskey.

His Christmas gifts were instantly successful, but one year, the holly was berryless. Wolf sent out the boughs anyway, hoping the barren branches weren’t indicative of a trend and wondering how he could guard against a repeat in the years to come.

Meanwhile, Daniel Fenton had graduated from Rutgers University in 1940 and come to Millville to teach agriculture and science at the high school. When World War II broke out, he left and returned in 1944 with his wife, Katherine, hoping to teach again.

While waiting for a position to open, Fenton went to Wolf to ask about a job. Wolf, who had begun a holly orchard, assigned Fenton the task of taking care of his beloved holly.

Fenton learned to propagate and over the years developed 14 varieties of holly, including Mamie Eisenhower and Eleanor Roosevelt, which grow with other varieties on the White House lawn. Fenton co-founded the Holly Society of America, became president of Silica Sand after Wolf’s death in 1965 and, with several investors, bought the 55-acre holly farm after Silica Sand was sold.

People flocked to the farm to wander among the holly trees, shop in the gift shop and visit the cottage where furniture and window frames were made of holly wood and the china featured holly patterns. A heart attack in 1980 forced Fenton to stop work and eventually the farm was sold.

A civic leader, Fenton was known as Mr. Holly and is credited for planting more than 4,000 holly trees.

Governor Phil Murphy: “Safeguarding New Jersey’s interconnected open spaces and diverse ecosystem is critically important in protecting our environment. Through the acquisition of Holly Farm, we are able to preserve New Jersey’s natural resources and become more resilient to the devastating effects of climate change.”

Department of Environmental Protection Commissioner Catherine R. McCabe: “We appreciate Atlantic City Electric’s commitment to the environment by helping to preserve this critical open space in South Jersey. The purchase of the property is a tremendous accomplishment for the state of New Jersey, our conservation partners and residents.”

Tom Wells, director of Government Relations, Nature Conservancy: “This is one of the most important land preservation projects in New Jersey in many years.”

Ray Bukowski, DEP assistant commissioner, Natural and Historic Resources: “Visitors to this property will be able to enjoy the land as a place to quietly appreciate nature, hike, or view wildlife in pristine habitats.”

Jennifer M. Coffey, ANJEC executive director: “This is tremendous news for the people and animals that call the Garden State home. It’s the completion of more than a decade of work to protect enormously special habitat for threatened and endangered species for generations to come. ANJEC extends gratitude this week of Thanksgiving to … everyone who helped make Holly Farms go green!”

Ed Lloyd, director of the Columbia Environmental Law Clinic: “This is a fantastic day for the environment in New Jersey. After three decades of negotiations, we want to commend Atlantic City Electric and NJ DEP for preserving this gem.”

Michele S. Byers, executive director of the New Jersey Conservation Foundation: “We applaud today’s announcement and are honored to support the New Jersey Green Acres Program on this momentous land preservation achievement. Ecotourism is a major economic force in this region and the preservation of the Holly Farm will boost public visitation and enjoyment, bringing much needed economic benefits to the area.”

Dave Velazquez, president and CEO, Pepco Holdings, which includes Atlantic City Electric: “Our commitment to serving our customers and communities goes beyond providing the safe and reliable energy service they count on. We recognize that we need to lead the fight against climate change and help preserve the environment where we live and work.”

Jeff Tittel, director, New Jersey Sierra Club: “This tract of land is of vital ecological importance. Not only is it a biodiversity hotspot, containing numerous wetlands and endangered species, but it is part of a large, contiguous ecosystem of protected land. This purchase is critical to preserve sensitive ecosystems in the Pine Barrens and in the Delaware Bayshore forest region.”

Eric Stiles, president and CEO, New Jersey Audubon Society: “This amazing site, which many state and local organizations have been championing for over two decades to permanently protect, provides essential access for outdoor recreation and wildlife and habitat protection. This achieves the twin objectives of supporting the economy through advancing nature-based tourism and improving and preserving our environment.”

J. Morton Galetto, CU Maurice River: “This newly acquired space preserves in perpetuity a bridge between two Wild and Scenic river corridors that are home to New Jersey’s largest concentration of rare and endangered species. This is a global treasure that the public will appreciate for generations to come.”