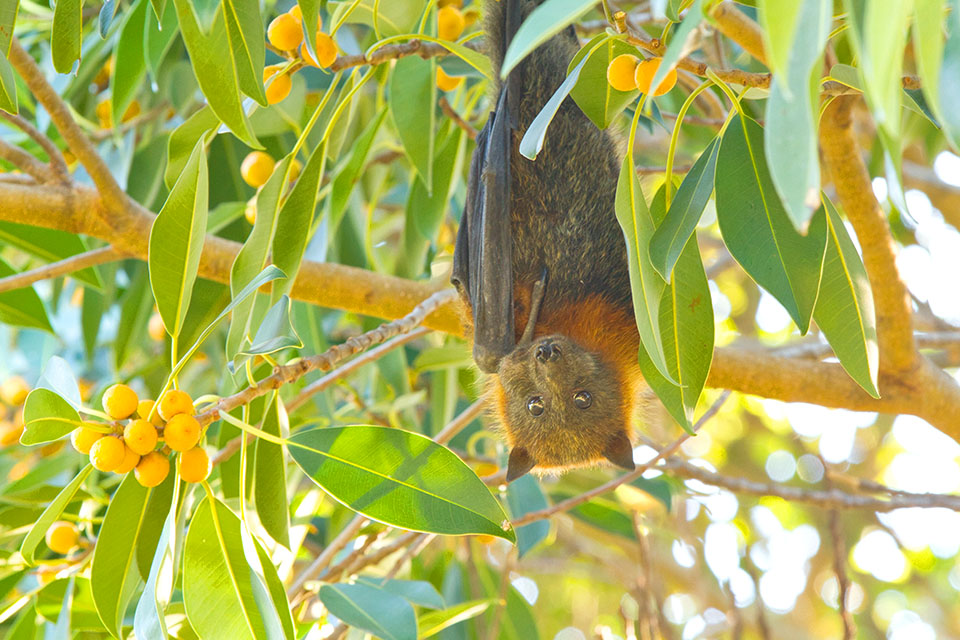 Bats are the only mammals that can fly. Flying squirrels would more properly be called gliders since they can’t perform a sustained flight, but rather float from one place to another using a cape of sorts to soar.

Over the years bats have been misunderstood and their history is shrouded in false legends, from morphing into vampires to attacking people’s hair. Yes, I’m in the Halloween spirit and it’s time to get ghoulish.

In Australia I was fascinated by fruit bats (Pteropus), the world’s largest member of their species. Since the face is fox-like they are commonly referred to as flying foxes. They become active before dusk and look like raptors with their three-foot wingspan, while their bodies are about 16 inches long. Their lifespan is 15 to 23 years. As dusk approached my amazement at seeing hundreds of flying foxes wheeling in the air seemed ridiculous to the Aussies. But come on, to an outsider it was incredible!

Flying fox do not rely on echolocation as our bats do, but rather use their large eyes to find food. I witnessed the urban bat camps in the Royal Botanic Gardens in Sydney that could house hundreds of thousands of these creatures. Because of their large colonies they have a number of detractors. But large numbers in only a few congregations often make a species more vulnerable to extinction. Loss of habitat, slow reproduction, and high juvenile mortality are factors as well. In 1972 Australia classified them as “vulnerable to extinction” and afforded them legal protections. They are important in pollinating flowers and dispersing seeds. When they take up residence in a spot for a long time they can cause trees to die, so wildlife control officers sometimes employ non-lethal methods to get them to move on.

Most of our local bats look a bit like mice with wings, and in fact Germans call them fledermaus or flying mouse. But they are more closely related to humans than to rodents. In fact, the bone structure of their arms is said to be more similar to the arms of humans than are the wings of birds.

Although New Jersey bats are more diminutive they are just as interesting. And sadly they have their own survival issues. White-nose syndrome is a fungus that grows during hibernation and has caused massive mortalities. It is estimated by Bat Conservation International that 5.7 million bats in the northeastern United States have been killed since 2006 by this fungus. New Jersey biologists reported that in our state tens of thousands of bats have died.

Only about 5 percent of bats carry rabies. While they are not aggressive they should not be handled. If an animal appears rabid you should notify an animal control officer. Saliva transmits the rabies virus. If you are ever bitten by an animal, wash with soap and water immediately (rabies is a weak virus), then immediately seek medical attention, especially if you suspect the animal might be rabid.


• Do you want to help NJ bat populations? Whether you’d like to build a bat house or exclude them from your home, this NJ Fish and Wildlife webpage will help: njfishandwildlife.com/ensp/bat.htm.
• Endangered and Nongame Species Program, Environmental Specialist / Biologist Mackenzie Hall, leads bat conservation work in New Jersey. E-mail her: Mackenzie.Hall@dep.nj.gov or call 908-236-1084.
• Great read for children: Bat Time, by Ruth Horowitz, was our daughters’ favorite book, especially when their father read it to them. It is about a daughter and her father enjoying the flights of bats before bedtime.
• It is illegal to hunt, capture, or kill a bat in New Jersey; they are protected under the NJ Endangered and Nongame Species Conservation Act.

The Center for Disease Control (CDC) reports from 2008-2018 document only 23 cases of rabies being transmitted to humans, and eight of these were outside the U.S. in our territories. There are countries with serious rabies epidemics primarily linked to feral dogs. We must remain vigilant.

Conversely, one bat can consume up to 3,000 small insects a night (including mosquitos, the number one killer on the planet, causing 2.7 million deaths a year!) Fortunately, in the U.S. deaths have not been as prevalent as in other places. But in 2018, the CDC reported West Nile virus to infect 2,647 people and cause 167 deaths in the U.S. Also, eastern equine encephalitis (EEE) has caused 10 deaths nationwide this year.

A study done by a team of scientists including USGS, University of Pretoria (South Africa), and Boston and Tennessee universities estimated that bats’ pest-control services in the U.S. save farmers somewhere from $4 to $53 billion every year.

All of New Jersey’s bats are insectivores. Bats use echolocation to find their prey, a sonar of sorts. Some insects learn to detect their clicking noises to avoid becoming lunch. When flying at greater heights bats sometimes don’t use their navigational sounds, and a number of them are killed by collisions with skyscrapers each year.