Often feeding through the night, black skimmers glide in a straight line, back and forth, relying on touch (not sight) to capture their prey. 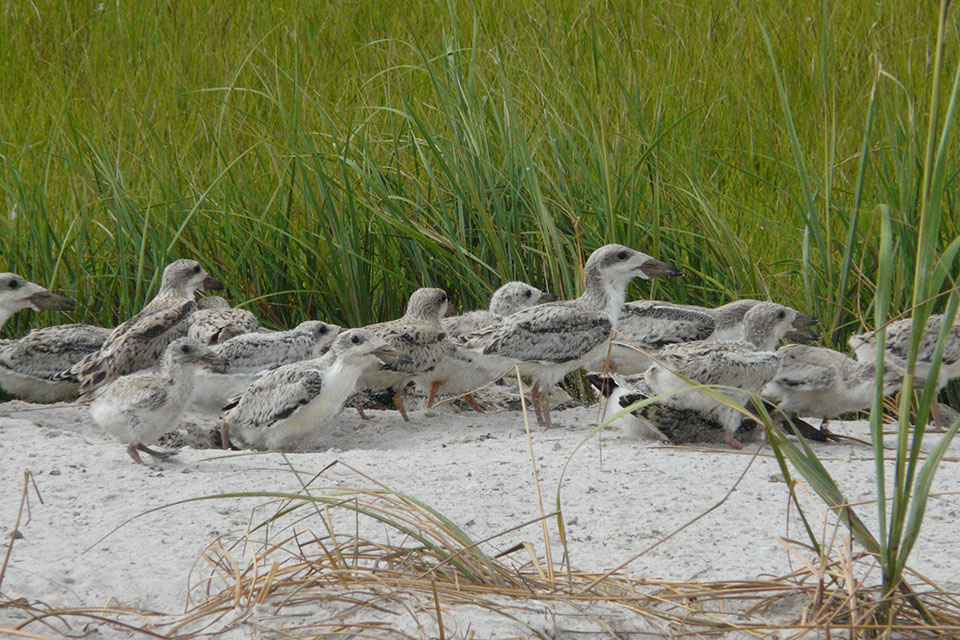 Late in the afternoon, over two decades ago, I stood at the terminus of Thompson’s Beach Road and marveled at a small flock of birds flying across the water-filled ditch of the marsh plain. About six birds in unison moved single file across the water in front of me. Each of their lower bills plowed a two-inch furrow through the water, leaving a V-shaped wake behind them. Each wingbeat extended above their body and stopped short of dipping into the water. Occasionally a wingtip sliced the glassy surface. The water was still and reflected their white bellies. Their sable-colored backs looked black and their large rosy beaks were strikingly beautiful. Their red-orange legs were extended behind them, hidden by their tail feathers.

Then they rounded a bend in the ditch and were gone. They lifted above the grass, swirled, and repeated the same course in the opposite direction, skimming along again in their search for small fish. Repeatedly they made passes on the watery route and I assumed their efforts were successful, as occasionally one’s head would nod down and its bill would snap shut. It was like an aerial ballet, and we had a front-row seat. “Black skimmers, wow! How do they do that?,” I inquired of Clay Sutton.

“Keep from knocking off their lower mandible. What if they hit an object like a snag?” 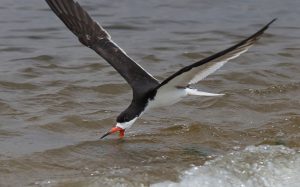 “Their bills are hinged in such a way as to flap backward,” the ornithologist replied.

And from that moment on I was awed by them. Nature never disappoints.

Skimmers’ fishing technique is unique to the group; they glide in a straight line, relying on touch and not sight to capture their prey. They can forage at night because their method is tactile, and their eyes are adapted for night vision. Small fish are often at the surface in the evening. Observations of fishing are normally made at dusk or dawn, but they often feed throughout the night. They eat primarily small fish like anchovy, killifish, herring, minnows, and silversides. Other likely prey are shrimp and other crustaceans. 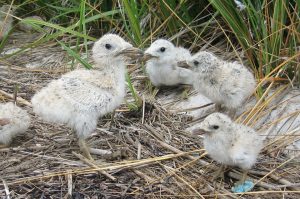 On another occasion, at Edwin B. Forsythe National Wildlife Refuge, I observed a large flock on sandy spits, all facing into the wind ready for lift-off and standing as still as soldiers on sentry duty. When standing they have a comical profile compared to their graceful flight display. They have a large body and disproportionally short orange legs with a webbed foot, and their lower mandible juts laterally beyond the top by 2–3 cm. This undershot jaw looks like a caricature. Their bill is markedly oversized when compared to their body, and is red with a black tip. The bill is deep when viewed from the side, but along most of its length it is very thin like a stiletto when seen face-on. The white of their belly extends to the forehead beneath the eye, leaving their dark eyes hidden in chocolatey black plumage.

In the spring I witnessed a similar flock at the Heislerville impoundments flushed by an eagle’s approach. They are often seen in resting flocks during the day because they forage mainly at dusk and into the night. 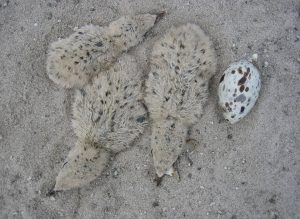 Those dark eyes have yet another characteristic common only to the world’s three species of skimmers: They have a vertical pupil, like a cat’s eye. All other bird species have round pupils. During the day the pupil contracts to a slit to protect their retinas from the glare of water and sun. But when fishing at night it opens to allow as much light to pass as is necessary to navigate waterways. David Sibley informs us that their eyes are relatively smaller than other birds but their fully dilated pupils are larger than birds that forage by day. A number of aquatic nocturnal reptiles and amphibians have similar pupils, as do nocturnal vertebrates, especially the felines.

Black skimmers are a coastal species and beach nester, although in New Jersey they frequently nest on salt marsh wrack, far from predators and people. Black skimmers nest in New Jersey, but migrate to North Carolina and south for the winter. Breeding populations exist from Massachusetts along the eastern U.S. to Florida and around the Gulf of Mexico into Mexico. Year-round skimmers can be found from Virginia and south along the Gulf, extending around the Yucatan Peninsula. Their western range is from California through central America. They occur throughout the South American continent, including landlocked countries and the Caribbean.

Skimmers mate for life. In general, pairs that mate for life have higher reproductive success than those that do not. Reasons for breaking up the original pair bond are incompatibility in incubation rhythms, failure of one member to come back early enough to the pair’s nest site, or death.

Skimmers are sexual dimorphic, which refers to sexual difference beyond sexual organs. Males are bigger than females, which is obvious when they stand together. The skimmer male courts the female by bringing fish prior to copulation, thus providing for the female’s egg laying. Parental duties are shared—incubation, building of a scrape nest, and feeding of chicks.

Eggs and chicks are speckled and well-camouflaged against the sandy scrape. Since incubation begins with the laying of the first of between two and six eggs, they hatch asynchronously (in the order laid). Thus, each chick is older and larger than the next hatchling. There is a great advantage to being the oldest. The oldest is bigger, and when a parent brings back food, it can outcompete its siblings for nourishment. If food is not plentiful the oldest will have the greatest chance of survival, and will survive at sufficient weight to ensure its survival while younger chicks in a brood may perish. This is a huge asset of skimmers and other asynchronous hatchers, because it ensures that the parents raise at least one or two chicks each year.

Skimmers are colony breeders and often share a nesting isle or beachfront with terns. Terns are aggressive and help in the protection of the colony should an intruder approach or invade it. Hundreds of nesting pairs help to insure a greater likelihood of success; there are many eyes to watch for and ward off would-be predators.

Skimmers will also make zig zag flights to dissuade intruders. As is common with some beach nesting species, skimmers employ a distraction display by feigning a broken wing to lure away an intruder. Skimmers, however, are quite shy and more easily disturbed by people walking too close to their colony.

The typical lifespan for skimmers is five to 15 years with records occurring around 20. Females are not sexually mature until about three years of age and males mature at around four years.

Nesting begins in mid-May to early June on coastal sands and saltmarsh islands. Incubation takes about 21 to 26 days. Fledging occurs about one month after incubation.

A lost brood may cause a second clutch that could extend nesting into September. These late nesters are successful only if a large number are still tending chicks; a lone skimmer or two will abandon chicks if the rest of its colony-mates leave for the season.

Beach nesting birds have many challenges and in New Jersey the skimmer is considered endangered, primarily because there are only two large colonies. Smaller colonies on salt marshes are sometimes more productive because they are isolated from predators and people. Habitat loss, predation, and human activity pose threats. Nesting sites need to be protected from beach raking machines, vehicular and foot traffic, owls, falcons, mammalian predators such as rats, cats, foxes, and racoons; these all have the potential to devastate a colony. Prior to the 1900s skimmers were hunted for food to near extinction.

How can you help? Support Conserve Wildlife and the NJ Endangered and Nongame Program that monitors nesting sites and fences off areas with posts and string. Respect fencing, and always leave an area if the skimmers continually flush from their nests. These programs educate beach visitors and restrict areas, helping to foster success in colonies.

Birdlife of the Gulf of Mexico, Joanna Burger