Flying is for the Birds

Human flight has been inspired by birds and their remarkable adaptations. 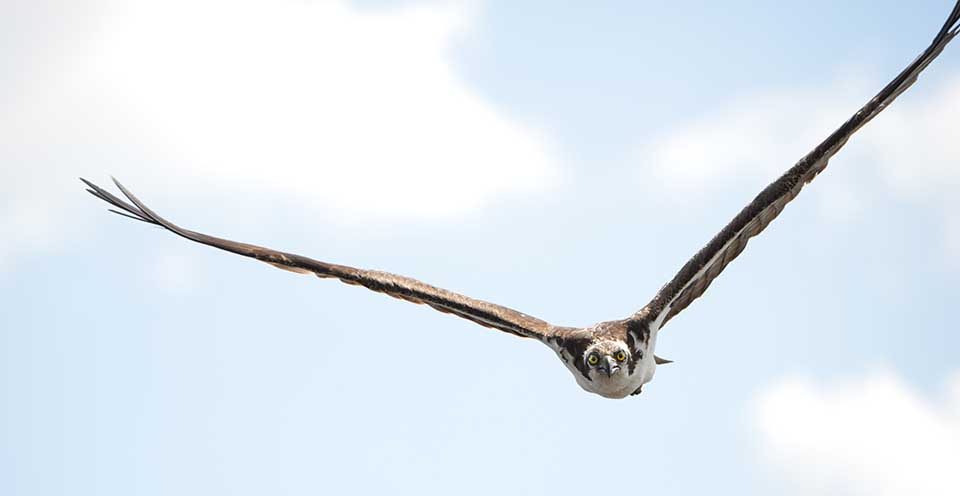 An osprey holds its primary and secondary wing feathers tightly together and its tail closed for speed. photos by author
by J. Morton Galetto, CU Maurice River

Growing up I remember that any movies about the invention of flight for human transport included the Wright Brothers as well as a man who donned wings. His venture, from my recollections, involved feathers strapped to his arms and a leap from a structure onto the ground, resulting in a balled-up mess of plumes. I don’t recall a name being associated with this botched attempt, but then history remembers successes better than failures. However, a reminder for children is that you can’t hit a homer if you don’t swing at the ball.

So clearly not everything with feathers flies. In fact some birds with feathers don’t fly and other animals fly that have no feathers, as mentioned in last week’s article— bugs, bats, and fish (well, sort of).

As for our nameless inventor who donned wings, you can rightfully conclude that his arms, and yours, lack the proper profile to allow airborne flight. There are people who do sometimes wear wingsuits called BASE jumpers, BASE being an acronym for the objects that they propel themselves from—buildings, antennae, spans (bridges), and earth, primarily cliffs. BASE jumpers reach speeds up to 120+ miles per hour, called terminal speeds and for good reason. In checking out this activity online I found there are lists of “the departed” associated with this sport. That’s one good reason why I’ll stick to birds for this article.

There are lots of aerodynamic factors that are important for achieving lift-off and birds have many physical attributes that allow them to achieve flight. Their wings, like those of planes and insects, are basically airfoils, curved surfaces that are designed with a favorable ratio of lift to drag to allow flight. The body or fuselage shape can reduce drag and make flight easier as well.

A bird’s wing is wider where it connects to the body and tapers near the tip. The leading edge is thicker than the trailing edge. The wing shape and feathers make it possible for birds to become airborne, inducing air to move faster above the wing than beneath. The pressure on the upper surface is less than beneath, which creates the force we term ‘lift.’

To achieve take-off there also needs to be thrust. An airplane relies on engines while the bird relies on muscles and flapping. Birds’ chests are designed to accommodate a lot of muscle, and they are also relatively lightweight and streamlined to further enable flight. Their feathers are light but strong. The ratio of body to wing, wing shape, feather placement, their foot’s design… all determine many things, such as how they achieve their take-off and landing, how much they perch, how often they soar, and how long they can soar, among other characteristics. In considering how they achieve their flight, think about those BASE jumpers and now add water, trees, cactus, gourds, and a plethora of other surfaces. Examining some species will give you insight into these factors.

Common loons are skilled flyers who can reach speeds of 70 miles an hour, while a few other waterfowl can do so as well. But for lift-off they need a long watery runway. In fact they can only achieve flight over the water’s surface. Occasionally you hear stories of loons who at night mistook a wet roadway for a pond, landed, and then needed transport to a body of water—always assuming that hanging out on the roadway didn’t leave them like our departed human jumpers.

CU Maurice River’s experiences with osprey have taught us a great deal about flight. At about six weeks of age the chicks begin to face the wind, which aids in lift. Just try launching a kite with the wind at its back—likely impossible. At around seven weeks of age they start floating up and lowering back to the nest. They exercise their wings a lot in preparation for their first solos at seven to eight weeks of age.

Ospreys, like other hawks, also make use of high perches; thus they can rely on gliding, thermals, and flapping. Young osprey who are not used to flight are often found exhausted on the ground or on docks and are unable to get airborne. In these instances they are susceptible to predation and elements, but if allowed sufficient time to rest they are normally able to achieve flight. Experienced osprey can fly from a low surface and even after submerging in water. They are often said to be the only bird that can shake off water in flight.

So larger, heavier birds prefer to rely on soaring or gliding to get started, and they also position their wings to create an updraft. Small songbirds depend on rapid wingbeats. Furthermore an outstretched wing is good for gliding and a bent wing is advantageous for quick maneuverability.

Soon people will be heading to Cape May Point to watch large numbers of birds migrate across Delaware Bay. By soaring and utilizing updrafts and thermals the birds achieve heights that permit them to glide across the intervening water. They will also swirl in groups, drafting each other as they climb in a silo-shaped formation called a “kettle.” This allows them to reduce drag on those who follow.

Colonial birds face the wind for a fast getaway. Skimmers, because of their very long beaks, make this readily observable. Many birds remain at the ready to take flight, or if not they normally adjust to face the wind before becoming airborne; otherwise they would have to flap harder and faster to lift off.

Different shapes or designs of birds spell out the different approaches to flight. For chimney swifts flight might be somewhat dictated by their feet—well, sort of. Their long claws are not designed for perching but rather for clinging to vertical surfaces like those found in caves, hollow trees, chimneys, and airshafts. So when they leave their cavities they can’t simply land on a branch. With the exception of nesting and roosting these birds fly continuously. They eat while flying and can even sleep in that state. Their long wings and relatively short cigar-shaped bodies are perfectly suited to maintain this flight.

The world has some extraordinary winged creatures. The Andean condor, at 35 pounds, is the heaviest soaring bird, aloft about 99 percent of the time. It lives on cliff faces in the Andes where updrafts created along these formations aid its flight.

In Peru I had the opportunity to soar the cliff faces of Lima with the assistance of a paraglider—oh, yes, and a pilot. The ocean creates wind currents against the cliff’s face that produce an updraft. Most places only allow a downward glide with a paraglider, but these seaside conditions allow for sustained flight.

Perhaps the most implausible and impressive of the soarers is the wandering albatross. It has the largest wingspan of any bird, at 11 t0 12 feet across. In southern New Jersey our largest wingspans belong to the great blue heron, brown pelican, and bald and golden eagle, measuring from six to 7.5 feet, and a sporadic trumpeter swan at eight feet (occasional winter visitor).

Wandering albatrosses make use of dynamic soaring in which the water is key. They rely on riding thermals but at different heights they change strategy. When they fly so high that they can travel in the same direction as the wind they move with it, and on descent they travel swiftly, thus progressing forward. They can also rely on a tacking technique, zig-zagging like a sailboat but still making progress. Researchers found they can move 3,000 miles per week while expending very little energy.

Buckle your safety belts or better yet take note of emergency liferafts for these facts. Wandering albatross only come ashore to breed. When they first fledge they may stay at sea for five years, never returning to land. In their southern ocean habitat they only need to flap every few hours and can fly more than 50 miles per hour. They can smell prey and track fish for up to 12 miles. They can live to be 60 years of age.

Clearly humans were first inspired to fly by our fascination with birds, and over time we have had technological success. There is still a lot to learn from our feathered friends, whose biomechanics are continually studied. When it comes to flying unassisted birds have truly captured the imagination of people since the beginning of time.