Dedication and hard work pay off for mixed martial arts champ from Millville. 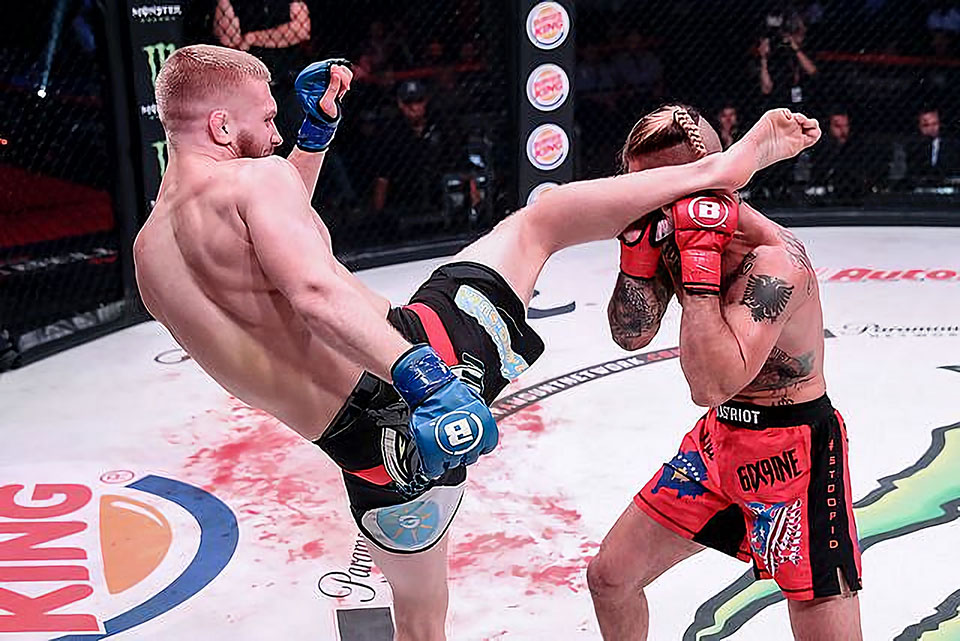 Undefeated Connor Dixon, of Millville, is set to compete on March 21 at the Hard Rock Hotel in Atlantic City.

Rowan College at Gloucester County (now Rowan College of South Jersey) alumnus Connor Dixon, class of 2018, is working hard to prove himself in the world of mixed martial arts (MMA) and hopes to develop into one of the best Ultimate Fighting Championship (UFC) competitors in the world. A graduate of the College’s Health and Physical Education program, the Millville native knew from a young age that his future would be in competitive sports.

And prepare he did. While wrestling at the College, Dixon qualified for nationals not once, but twice. Ask him about important lessons learned along the way and he credits his time at RCGC with helping to learn the value of hard work and being prepared. Attending college full time while training for MMA he admits was an extremely challenging, but uniquely valuable experience.

“My experience was particularly difficult because I was taking 14 credits a semester, training in-between classes every single day in Philly and Washington Township, coaching/training martial arts at night in Millville, and then working on weekends,” said Dixon.

Dixon credits his RCGC wrestling experience with pushing him to further his MMA career, and helping him to build the skills necessary to be a well-rounded athlete. He credits former wrestling coach, Mike Wilcox, for helping with his wrestling career and also for introducing him to his current MMA team.

Another person of influence was Assistant Professor Robert Valli, a favorite because of his experience working in all levels of education. Valli always found a way to relate teaching lessons to what was actually happening in the schools, and made them entertaining.

Dixon, who has been training for nearly three years toward a full-time MMA career, was exposed to UFC fighting by his father at a young age and wanted to be like the wrestlers he watched on television. He recalls seeing Royce Gracie defeat Ken Shamrock in the finals of a tournament, and knew then what he wanted to do with his life.

Dixon also noted that even though he discovered his passion at an early age, he has dedicated his entire life to training and developing his talent. While he owes much of his success to his training partners and coaches at Renzo Gracie Academy in Philadelphia, Webb Fitness and MMA in Washington Township, and Impact Fitness and Martial Arts in Millville, a very large portion of his success he attributes to his father, Dan Dixon.

His father opened his own martial arts studio and through the years coached Dixon in the art of Brazilian Jiu Jitsu. A black belt, Dixon’s expertise in Brazilian Jiu Jitsu has allowed him to dominate opponents in both amateur and professional MMA.

Dixon made history on October 25, 2019 in the Bellator 231 Welterweight Match for submitting his opponent in 42 seconds with a Kimura, one of the rarest submissions in MMA.

After graduating from RCGC, Dixon continued his studies in Health and Physical Education at Rowan University. Presently, he is taking a break to focus solely on training and coaching because his MMA career has fast-tracked so much quicker than he initially anticipated.

“I’ve been coaching Brazilian Jiu Jitsu almost my whole life and it seemed like a really good fit for my lifestyle with training and coaching,” said Dixon, whose future plans include eventually finishing his bachelor’s degree so that he can teach and coach wrestling, and continue to coach martial arts.

For now though, he plans to continue to prove himself every time he enters the cage and keep his undefeated record. The goal is to one day get signed to the UFC and become one of the best fighters in the world.

To current RCSJ students hoping to pursue an athletic career, or any career in general, he offers this advice—success doesn’t happen overnight.

“You don’t have to be the most naturally talented or smartest person to be successful in your own field. If you put your head down, work hard and have good training habits, you can find success,” advised Dixon. “I’m not the most athletic or physically gifted person, but I have been able to become a professional athlete and find success through many, many years of hard work and dedication. The goal is to get one percent better every single day and hopefully, in a couple years, you will find yourself with a very developed set of skills. Just surround yourself with people who you know have your best interest at heart and don’t give up.”