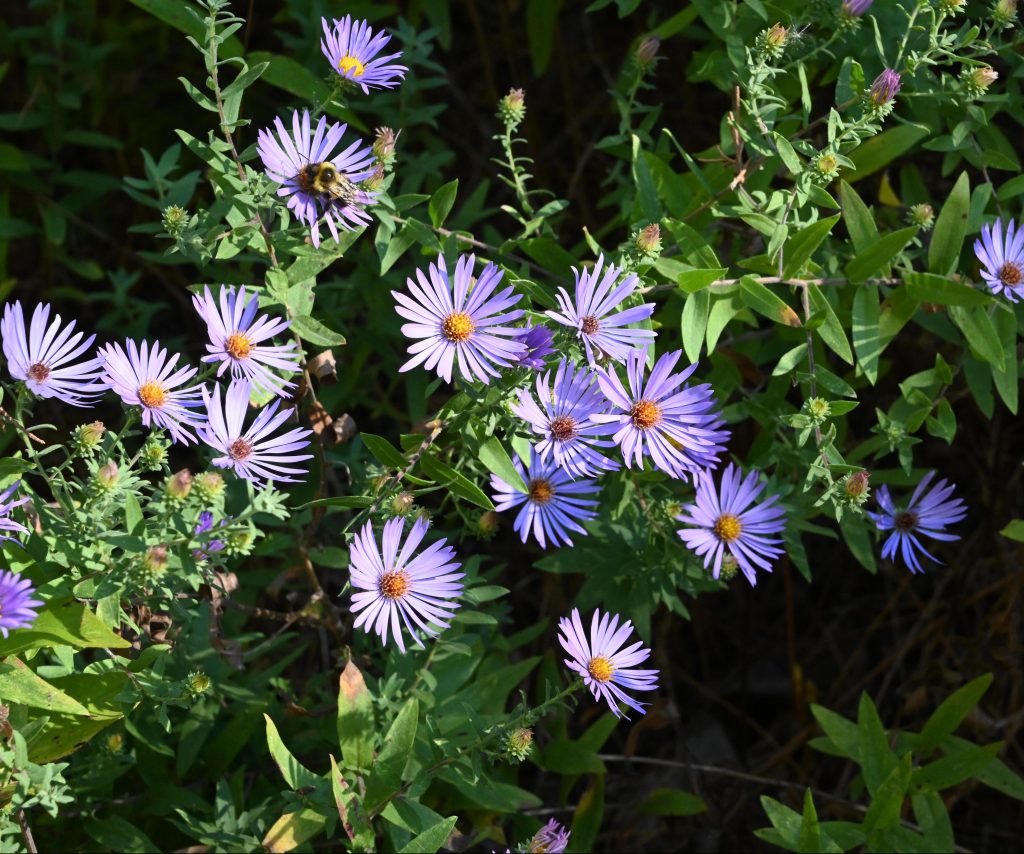 Asters are a fall bloomer. If pruned back late in May and/or early in July asters will tend to get more blooms and not bend over. These were pruned in late May. PhotoS by author
by J. Morton Galetto, CU Maurice River

Today I was lamenting the many blooms in my garden that have wilted and gone to seed. However I reminded myself that the seeds would provide lots of sustenance for animals that frequent the garden, and many would also reproduce as volunteers. The groundsel bush was so heavily laden with its fluffy seedheads that it looked like a huge puff of cotton.

Some of the fruits are just coming on and adding interesting colors. The persimmon is dropping its leaves and the orange fruits are becoming soft and ripe. The winterberry is covered in red berries but the holly’s are still green. Cranberry viburnum leaves are changing color and their red dangling fruit is plentiful. Acorns seem unusually abundant and I recall that a month ago the black cherries were as dense as we have ever seen them. Possibly this fall will be considered a mast year when the forest’s bounty is especially prolific.

We have a number of plants in our garden that bloom late or become hardier as the days get cooler. The Texas salvia likes summer until it gets too hot, and then, at the end of September and beginning of October, the volunteer flowers in particular often get a second wind. The asters that I trimmed in early July are really showy now, having waited until October to spread purple-blue hues all around the garden.

The Joe-Pye weed seeds clung to my sweatshirt as I searched the perimeter of our small pond for an old favorite perennial. Simply being perennial is no guarantee of endurance, but my little friends hadn’t let me down. I began to notice them in late September—emerald stems with no flowers, simply green buds—Spiranthes cernua, or nodding ladies’-tresses. As mid-October arrived they began to bloom. Each small orchid blossoms’ lower lips, or labellum, tilts downward or nods, as its popular name implies.

The flowers spiral downwards nearly the full length of the stem. The twisting is caused by uneven cell growth and thus the spike resembles a spiral staircase, rising higher and higher (typically nine to 18 inches tall).

The single flower is tiny—about 1/3 of an inch long and maybe 1/16 of an inch in width. The North Carolina Extension service goes on to describe it as “…consisting of 3 white sepals and 3 white petals. The upper sepal and upper two petals are fused together and form a curved hood that curls upward at its tip, forming an upper lip with 3 lobes. The lower petal has a prominent lip that hangs downward and has a crystalline appearance, while the lateral sepals are linear and non-spreading.”

Using their description, I can make out some of this with a magnifying glass. But with my naked eye mostly all I see is a nodding head. This is one of the few orchids that has a fragrance.

The scientific name derives from the Greek speira or “spiral or coil,” and anthos or “flower.” The twisted spikes are thought to resemble women’s traces—the silken laces ladies used to girdle their waists—which has been corrupted to “ladies’ tresses.” Corset-type garments date back to 3000 BC; clearly during the Victorian era until 1930 they were also very fashionable. However, at what point the name was connected to the plant I do not know.

There are at least 19 different species in the United States. Newcomb’s Guide covering the Northeast and North-central region of North America identifies six. Based on the flowering period (late summer to early fall), its narrow basal leaves, and its identification as the most common of the species to our region, I have deemed the one in our yard to be Spiranthes cernua, or Nodding ladies’-tresses. Certainly it is in the genus Spiranthes.

The plant likes swampy, acidic soils in partly shaded woods, so the bogs of the Pine Barrens are a likely place to come across it. Growing along the coastal region from Newfoundland to Florida, and from Florida to Texas, it is found northward into Canada. Some mapping takes in Georgia before moving westward, omitting Florida, while others include the Sunshine State.

Over the years the plant has formed little clusters of colonies around the perimeter of our pond. Insects seeking sweet nectar contact its sticky pollen and then transfer it from flower to flower as they nectar further on. Bumblebees are said to be the primary pollinator, which seems an unlikely pairing—a very small blossom and a sizeable bee—and it prompts me to want to learn more about bumblebees! Spiranthes also spreads by its root system or tubers.

Not surprisingly native peoples were already onto its medicinal uses before “modern man.” Paul Hamel and Mary Chiltoskey, in their book on the Cherokee’s use of plants, discuss the herbal applications of ladies’ tresses as a diuretic for urinary tract problems, while further addressing skin infections, painful breasts, and eye problems. S. Foster and J. Duke add the treatment of venereal disease and a wash to strengthen infants to the list of Native American uses. It makes sense that pharmaceutical companies have long explored various compounds based on cultural and ancient therapies.

Having some late bloomers like nodding ladies’ tresses in the garden seems to help me ease into late fall, but I nonetheless will miss the showy blossoms of the previous seasons. n

Cherokee Plants and Their Uses – A 400 Year History, by P.B. Hamel and M.U. Chiltoskey.

Wildflowers of Eastern America, J.E. Klimas and J. A Cunningham