Every Day is Labor Day…

Rollers, dwellers, burrowers—no matter the type of dung beetle, they all put up with a lot of excrement on the job. 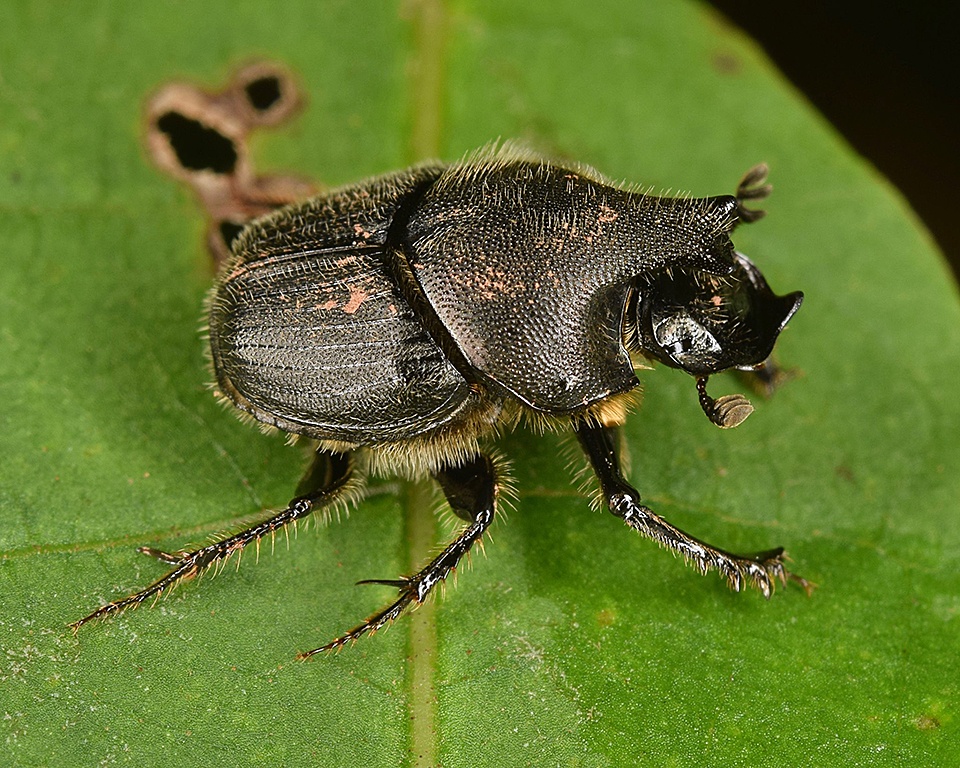 Onthophagus hecate was the dominate species in a study of cow dung in central New Jersey, or 55 percent of those collected at three varying habitats—field, forest and farm. This species is a tunneller. Photo: Christina Butler
by J. Morton Galetto, CU Maurice River Since we are on the cusp of Labor Day I thought we might delve into a true laborer from the animal kingdom, one that really puts up with a lot of … excrement. If you are thinking you are often knee deep in scat at the office then it’s time to consider the dung beetle; after all, misery loves company.

A number of folks I know who run sewage-related businesses state that they are “number one in the number two business.” Well, their bragging rights are clearly challenged by the dung beetle’s mastery of feces. According to my treasured and very tattered Golden Guide from the dark ages of my youth, these are members of the scarab beetle family with some 30,000 species in the cohort and over 900 species in the United States. At least 8,000 of them are found worldwide except in Antarctica. And about 75 of those species occur in North America.

Some of the women readers will surely ask, “Scarabs? Those lovely amulets treasured by Egyptians?” The very same. Their many iridescent colors of green, gold, copper, and blue have attracted artists, naturalists, and outdoor enthusiasts for hundreds of years. The Egyptians considered scarabs to be symbols of change during life as well as transitions into death.

This association derived from the “rollers.” There are three types of dung beetles, or one might say styles of carrying out their occupations—rollers, dwellers, and burrowers, and about 600 species are in the business of rolling. These beetles create a dung ball and cart it away from the scat pile to munch on at a later date, or as a surface on which to lay their eggs so they will provide nourishment for their offspring.

The Egyptians believed a god named Khepri rolled the ball of the sun through the underworld each night and pushed it over the horizon each morning. Since the scarab or dung beetle also rolls a ball it was adopted as a symbol of transition. Khepri’s effort represents not only a transition into a new day but also metaphorically it suggests life’s changes. One of the most famous scarab jewels was found on the boy king Tutankhaten’s breastplate—a carved piece of desert glass in the likeness of a dung beetle. Funeral scarabs are intended to help guide the departed to the afterworld. Since southern New Jersey has a glass heritage, permit me to add that desert glass is the result of lightning strikes or meteor impacts.

Some rolling scarab beetles navigate atop a ball of dung at night. How do they do that? They use the moon, and in the absence of the moon they use the Milky Way—yes, terrestrial voyagers using the stars. Some scientists made visors for beetles that hindered their ability to find their way, to test their theory of beetle navigation. They made further discoveries in the Johannesburg planetarium employing major constellations and manipulating projections of the Milky Way’s composition. In the end researchers concluded that beetles relied not on specific stars but rather the streak of the Milky Way and varying intensities of brightness—essentially celestial visual clues. So the Egyptians’ analogy between beetles and their god Khepri rotating a sphere at night was more accurate than they may have known.

The dung beetles that are tunnellers, usually enter the dung pile and tunnel beneath it. Generally a pair works in tandem, with the female staying in the tunnel and the male making deliveries of dung. The female sorts out the material for later dining.

The dwellers do not transport feces but rather feast upon the pile with females laying their eggs on the surface. Then larval development takes place within the pile. When the larvae hatch they can eat their way into adulthood.

So what kind of poop is of interest to dung beetles? Herbivore scat such as from deer and cow is prime because the dung beetles make use of what is not digested, breaking this material down further. Herbivore dung has half-digested grass and an odorous liquid, which is what adult dung beetles feed on. So fresh moist manure is important for adults, while larvae make use of older and drier dung, especially true for the dwellers (San Diego Zoo).

It also turns out that dung beetles are specialists and evolve like most animals in a narrow habitat, thus using scat from animals native to a region. When cattle were introduced to Australia there were no dung beetles that used the material in cow pies. While there were plenty that liked kangaroo scat no bovine specialists were present. This was a problem because cows like a clean pasture and so do people. All the waste from these ruminants reached crisis proportions and began contaminating both land and water. Australians finally introduced non-native beetles to take care of things Down Under.

The beetles’ recycling and burying of dung breaks up and composts the soil. Their activity also controls fly populations. Cows pass about 11 stools a day and each stool can enable the development of up to 3,000 flies every two weeks. A study conducted in Texas concluded about 80 percent of the dung can be buried and recycled by the beetles, making it inaccessible to flies and therefore helping avoid serious health risks.

Dung beetles’ benefits have encouraged their introduction worldwide. Exotic invasive species are generally a slippery slope causing more harm than good, so analyzing the benefits of introductions is tricky territory. In the natural world there are symbiotic relationships between native animals and their equally native scat recyclers. However, our livestock by and large is exotic or has been hybridized for thousands of years, so organisms to deal with their droppings can be elusive. Thus, the introduction of specialized beetles into pastures has become accepted practice.

Insects that eat the excrement of other creatures are called coprophagous. Before you get all grossed out, know we evidently owe them a debt of gratitude. The manure of cattle, deer, pigs, sheep, goats, and other livestock and wildlife enters our food stream via farm fields.

and exposes us to E.coli, parasites, and the like. Not only does it contaminate our food supply but it also pollutes our streams and rivers during storm events. Therefore, dung beetles keep our fields and waterways far cleaner and safer than they would be in the beetles’ absence.

Deer, birds, and wild pigs are also potential sources for E.coli. Scientists are conducting studies on the benefits of having dung beetles haul E.coli-infested scat into burrows, thus reducing the opportunity for bacteria to infect our food supply.

So how strong are these laborers? Many articles and experiments seem to have focused on their strength because of its astounding nature. On average, rollers can handle dung balls that are 50 times their own weight. A record was achieved by a horned dung beetle that handled a weight equivalent to 1,141 times that of its own. This would be similar to a 165-pound person moving a triaxle truck loaded with sand.

So as we go into Labor Day give some thought to all the work the dung beetles perform, and be grateful that they do. n