Scary and beautiful to behold, spiderwebs are lessons in form and strength. 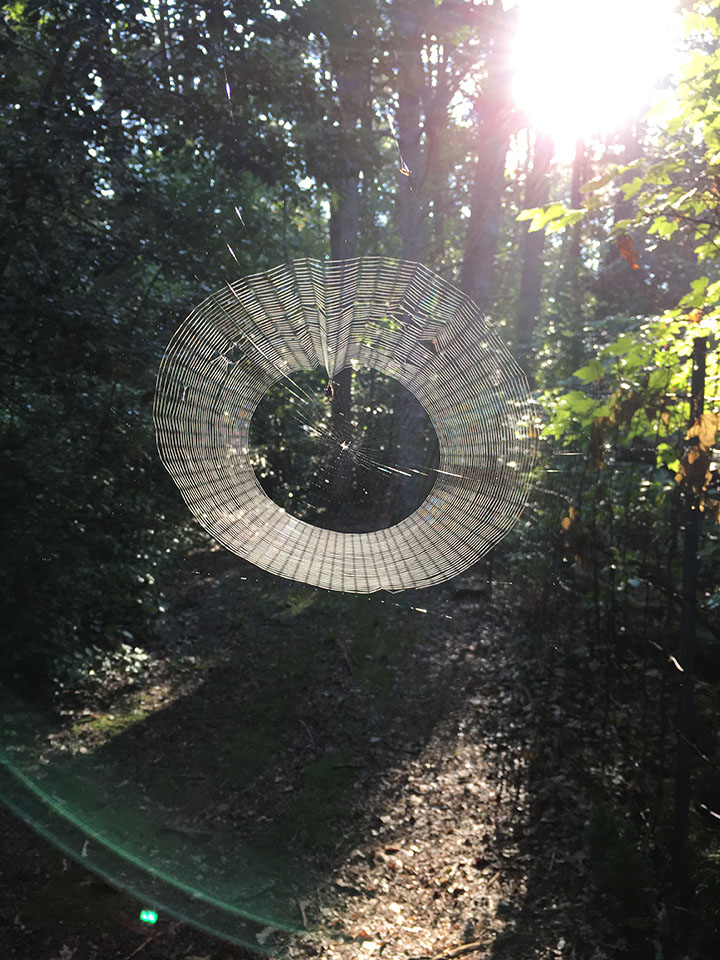 Over the past weeks I’ve see a number of spiderwebs in the woods that remind me of old vinyl records. They are not a spiral like a record’s grooves but rather perfectly woven concentric circles. When they are backlit, I’m struck by their uniformity. Most spiders’ webs seem more haphazard in the dimension of their individual cells. Not so the orb-weavers, which are in a genus called Micrathena. The micr- comes from “micro” or small, and Athena from the Greek goddess of courage, strength, civilization, law and justice, warfare, arts, crafts and more. These spiders are referred to as “spiny spiders,” and have a glossy hard abdomen. Evidently, there are more than 100 species and most come from the neotropics.

The one I was inspecting was an arrow-shaped micrathena, or Micrathena sagittata, sagitta meaning arrow in Latin because the body is rather arrow-shaped. In our yard there are also White Micrathena. All have spines and like their fellow arachnids there are two body segments and eight legs (insects have six). Unlike insects, they also have no wings or antennae.

Spiderwebs start off in liquid form and are made up of proteins. Not surprisingly, spiders’ suppers, insects caught in their web, are a source of those proteins. Most eat their web daily to recycle the material for the next unsuspecting prey. To ingest their captives, spiders use a combination of their web, neurotoxic venom, and expelled enzymes to liquify prey before sucking in a ghoulish Halloween shake. Yum.

Spiders have a number of different silks that they produce from these proteins when constructing a web. Some are sticky, others not, while some are more elastic to absorb the impact of flying insects. The spider has two glands to achieve this variety. Generally the innermost section of the web is dry to enable the spider to move out from the center with ease, but either way spiders are equipped with small claws to navigate the entire webbed trap.

There are many comparisons made between manufactured materials and the strength of a spider’s silk. Markus Buehler, professor at MA Institute of Technology, analyzed spiders’ silk and determined, in relative weight, that it is stronger than steel. He discovered that the initial stretchy response of the web and its ability to stiffen up as pulling increases was the dynamic that gives it resilience.

An amazingly adaptive response is incorporated in the web: If you pull at just one thread within the web it will break at that spot, but the remainder of the web will stay intact. Although compromised, the rest of the web will continue doing its job. Studying these biodynamics sheds light on engineering products for strength. Typically, engineers focus on materials in a uniform way to offer strength. A web gives new insights into thinking about and allowing for sacrificial weaknesses to allow the whole to continue functioning. MIT was looking at how this biodynamic might be applied in construction—buildings in earthquake zones, armored vehicles, etc.

Meanwhile technicians were thinking about how it might apply to computer viruses, by allowing an aspect of a computer’s circuity or a network to break away rather than taking down the entire computer or network of computers (MIT News, 2012).

A spider’s web is not impervious to the elements. Dew, ultraviolet light, humidity, and other environmental factors will compromise its strength. Understandably, some species are nocturnal and others’ webs are designed for sunnier spots.

Some spiders use their silk to transport themselves by the wind and can actually migrate hundreds of miles. Juveniles of some species will climb to high points and send out a strand that will cause them to be lifted up like a hot air balloon. A mass ballooning event caused layers of white silken strands to blanket the ground in Memphis in 2015. The silken sheet stretched nearly a half mile! The resulting sheet is evidently indicative of failed ballooning attempts (National Geographic).

Bioengineers are also fascinated by the toughness of a spider’s silk and study it to develop materials that must have that strength—medical devices, sutures, textiles, adhesives, bandages, artificial tendons, ligaments, implants, helmets, armor, airbags, and so forth. In my efforts to learn more about the webs that brought to mind a vinyl record, I was once again reminded of the lessons that nature teaches.

So often I’m asked what a creature is “good” for, as if nature must serve us. When I take the time to delve into a natural history topic, I find it serves us very well indeed. Many scientists talk about our planet being in the midst of the greatest extinction since the dinosaurs, and in a much more rapid decline. The Field Museum in Chicago has a clock that shows the number of species that have disappeared since 8 a.m. in the morning; by about 4:30 p.m. 35 species have become extinct. The exhibit noted, “The normal rate of extinction is one species every four years. Today, species are going extinct at a rate of 30,000 per year. That’s 82 species every day, four an hour.”

This speaks to the urgency of protecting spaces and preserving and enhancing habitats. But it also speaks to my heartstrings about taking time to appreciate even the smallest of wonders around us.