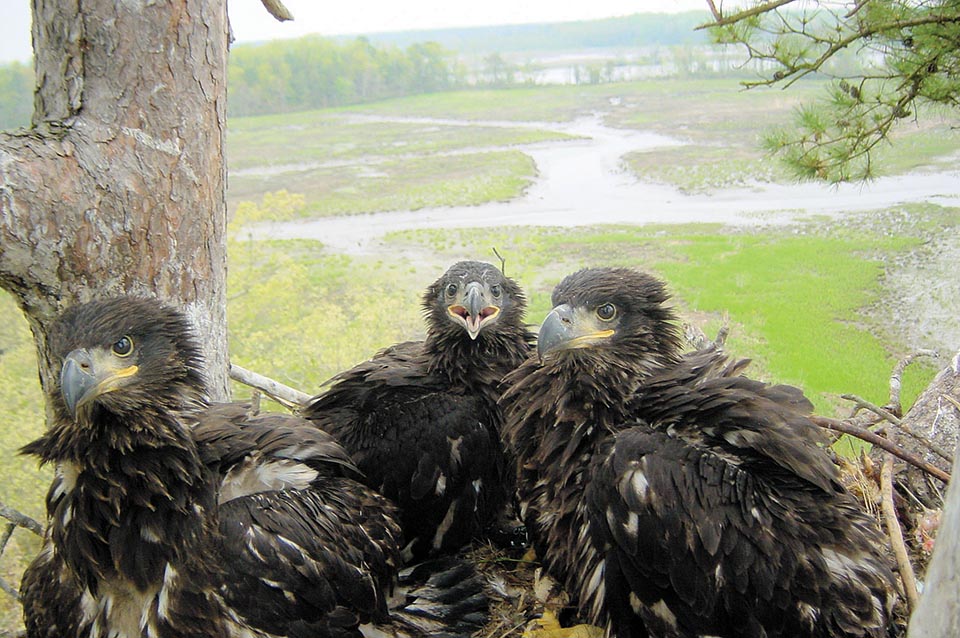 In 1967 the American Bald Eagle, our nation’s symbol, was considered endangered in all of the lower 48 states. Its decline was due primarily to chemical exposure to organochlorines and insufficient protections on many fronts. Shooting, trapping, poisoning, nest and habitat destruction were also factors.

No reliable population data existed for New Jersey prior to declines caused by persecution and pesticide use, although the state is believed to have had 20-some nests in the Delaware Bayshore region in the 1950s, before the population collapse.

The primary chemical culprit was DDT, employed for mosquito control beginning in 1945 and ending with a ban in 1972. Although the chemical did not kill the birds outright, it rendered their eggshells so fragile that they were crushed during incubation.

By 1970 only one nesting pair remained in Bear Swamp, Cumberland County. This nest was still present in the early 1980s.

The federal ban of DDT, in conjunction with restoration efforts by NJ’s Fish and Wildlife beginning in 1982, have resulted in a steady recovery of a species that otherwise would have been extirpated.

State biologists employed many wildlife restoration techniques, beginning with fostering chicks in the Bear Swamp nest and eventually rearing chicks from other regions to imprint to the Bayshore Region (hacking). Many nesting site protections were also instituted.

Today, Bayshore eagles have fanned out to populate many counties in the state. This year the statewide population is 211 pairs, up seven pairs from last year. The nesting population produced 248 young, and at least 184 are known to have fledged!

Other states also instituted recovery plans, each through massive efforts. The federal government was able to remove the bald eagle from the list of Endangered Species in 2007, a testament to a national resurgence of this icon made possible by protections and restoration efforts.

This is a synopsis of the heroic efforts to recover bald eagles in New Jersey. Read more details in this year’s report at njfishandwildlife.com/ensp/pdf/eglrpt19.pdf