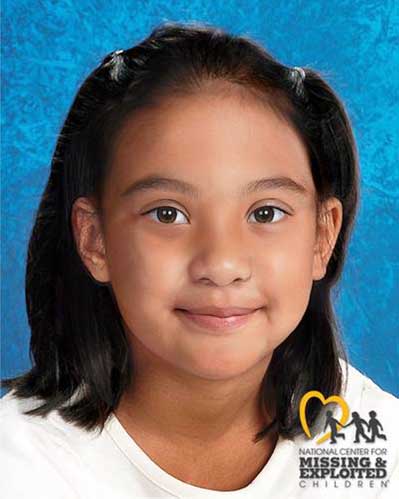 An age progression photo of five-year-old Dulce Alavez was released last week on the eve of the two-year anniversary of her missing date, September 16, 2019. In the image, Dulce’s photo has been age progressed to what she may look like at age seven. Dulce vanished about 4:20 p.m. from the Bridgeton City Park behind the Bridgeton High School where she was playing with her younger brother. Her mother was nearby.

Dulce may be in the company of a light-skinned, possibly Hispanic, male who is 5-foot-6 to 5-foot-8, with a thin build and acne on his face. He was seen wearing orange sneakers, possibly Nike’s, red pants and a black shirt. Dulce may have entered a vehicle and was last seen wearing a yellow shirt with an elephant on the front and black and white pants and white sandals.

Dulce is an Hispanic female and has black hair and brown eyes. At the time two years ago, she was 3-foot-5 and weighed 40 pounds. Bridgeton City Police are hoping the age progression, created by a forensic artist at The National Center for Missing & Exploited Children (NCMEC), will help generate tips to her wherabouts.

As we approach the two-year anniversary of the disappearance of Dulce Maria Alavez, law enforcement continues to pursue all leads in its quest to locate Dulce. The Cumberland County Prosecutor’s Office, Bridgeton Police Department, New Jersey State Police, New Jersey Division of Criminal Justice, Federal Bureau of Investigation, U.S. Department of Homeland Security and the National Center for Missing and Exploited Children (NCMEC), are still working cooperatively to determine those who are responsible for Dulce’s disappearance.

Since two years have passed since Dulce went missing and Dulce would be seven years of age at this time, the National Center for Missing and Exploited Children (NCMEC) worked with the Dulce Alavez investigative team to produce an age-progression image. This image is a depiction of what Dulce may appear like today. We thank NCMEC for their time and cooperation in completing the attached rendering.

We hold out hope that Dulce is alive (as we have no evidence of her demise) and want the public to know that this case will remain open until such time as we locate Dulce and determine those responsible for her disappearance.

We encourage our community partners to assist law enforcement by providing any information that they feel may be helpful. Information can be provided anonymously to the Cumberland County Prosecutor’s Office by visiting ccpo.tips or via the Bridgeton Police Department at bpd.tips as well.