Angler from the Sky

The belted kingfisher, with a diet that consists primarily of fish, has coloring that from above mimics the color of water; from below it blends with the color of the sky. 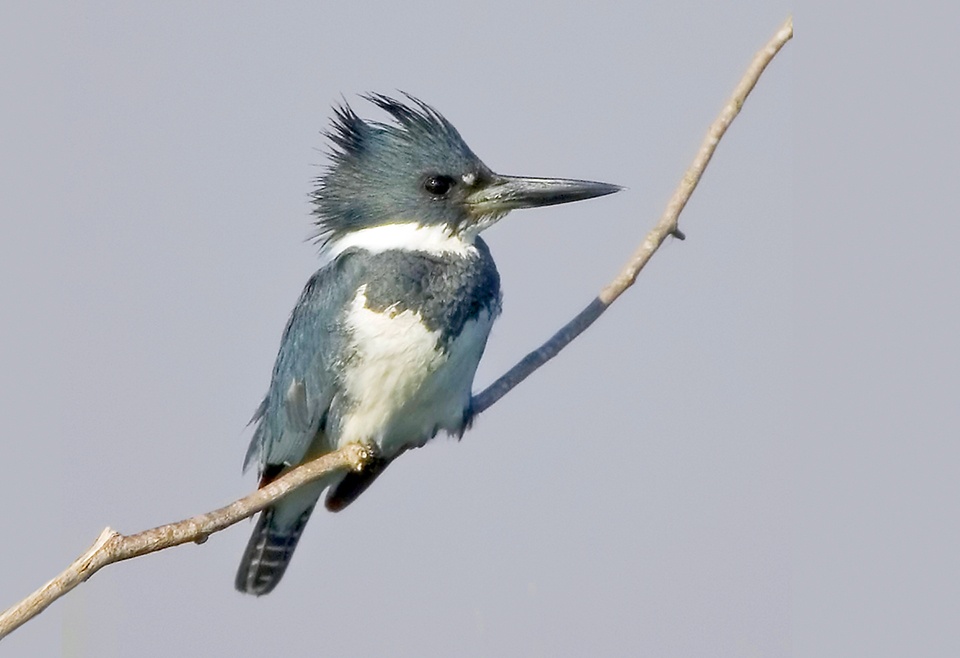 Male kingfisher. Author describes the bird’s appearance as “like a blue jay that has been hit on the head with a mallet.”
by J. Morton Galetto, CU Maurice River
Photography by Kevin Karlson

Belted kingfishers are one of my favorite aquatic birds. It was in the spring, when we check osprey nests for eggs, that I first began to notice their habit of escorting you out of their area. Invariably, we will hear their call before we spy the provoked creature. Ornithologists refer to the sound as successional mewing or rattle, but to me it is a chatter of clicking noises. So this is their strategy: They fly just ahead of the boat, landing in a tree or on a piling and chattering. From their perspective you are following them. Then when they have escorted you just outside their home turf they circle back to where they first encountered you, satisfied that they have lured you out of their territory.

Although kingfishers can be migrants in southern New Jersey, we have them year-round unless we get a hard freeze. Since their diet consists primarily of fish, open water is critical to their sustenance. Kingfishers that nest in New England and Canada, stop over to spend the winter in our region with our resident birds. Occasionally, they will eat reptiles, amphibians, aquatic invertebrates, insects, mice, and rarely berries, but primarily they are piscivores.

Their geographic range includes all of Greenland, Canada, the mainland United States, and as far south as Panama. South America has other species of kingfisher but not the belted.

When I tell people to watch for kingfishers on tours they often ask, “What do they look like?” I reply, “Like a blue jay that has been hit on the head with a mallet.” When their crest is raised their head appears to make up about one-third of their body size and they sport a bill that is equally long. Their wings, back, and head are a slate blue. The collar that encircles them from chin to nape is white, along with a gray bib. Beneath the bib is a white chest and belly. Belted kingfishers are one of the few birds in which the female’s plumage is more colorful than the male’s. The white collar appears in both sexes but the female is endowed with a rusty patch on her chest and sides, below the bib.

The thick neck and large bill are of great importance, for the males and females take turns burrowing into sandy bluffs to make their nests. Their feet are used in tandem with their bill, and are equipped with two fused toes that act as shovels. Most nests are dug 3’-6’ into the bank but there are records of nests extending 15 feet. And as if that wasn’t enough work, the male makes what is called a bachelor burrow some 10 to 15 feet away. Both the birds recognize their mate’s call and when the female needs a break from the nest the male takes over the duties. Hardly a bachelor.

Their eggs, generally six or seven in a clutch, are incubated for slightly less than a month. When the young hatch their condition is altricial or immobile, without down, eyes closed, and dependent on their parents for regurgitated food. It takes about 24 days for them to fledge. For about 10 days, the parents catch and kill fish, dropping them into the water for the young to snatch in order to give them practice in getting their meals. After about 10 days, they have learned to feed themselves.

The parents have one brood some time between April and July. They chase their young out of their territory once they can catch their own meals and have developed full independence, at about six weeks old. Kingfishers are seasonally monogamous and go their solitary ways once the young have fledged.

Their territory must have water, forest, and banks suitable for digging. Our southern New Jersey coastal bluffs offer this specific habitat. Water must have clarity for fishing; if there is an abundance of erosive runoff such as from farms along streams without treed buffers, the water could be too cloudy for fishing. The same is true for osprey. Trees that overhang the water are important for perching because they offer a visual field for fishing and are also convenient for calling to each other to trade nest duty.

On walks, our participants’ ears are always keenly tuned for the chatter of a kingfisher—invariably a crowd pleaser. n