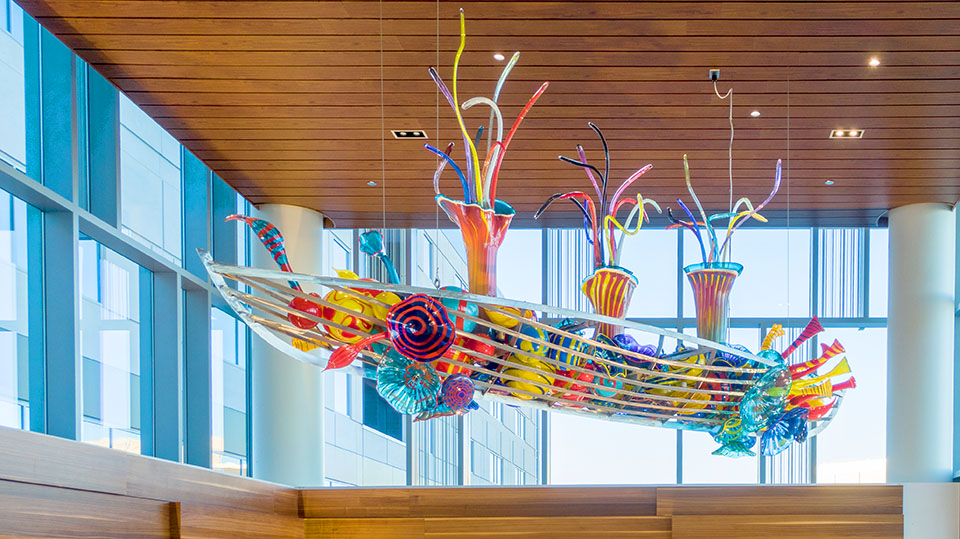 Cumberland County resident Peter Galetto, Jr. wears many hats. He’s an entrepreneur, he’s a board member at Inspira Health—and for more than eight years, he’s been a glass artist, blowing glass at WheatonArts in Millville with the help of some able assistants.

In June 2018, SNJ Today featured Galetto and the story of his glassworking journey. Meanwhile, Inspira Health, building a state-of-the-art medical center in Mullica Hill, asked him create a piece to be exhibited in the main lobby. What started as a request for a small piece of art, maybe a vase, turned out to be a boatload of 500-plus glass art pieces.

Donated by Jane and Peter Galetto Jr., “Journey to a Better Life” was recently installed and unveiled at Inspira’s grand-opening ceremony.

This week, we reprint Galetto’s story, written by Stephanie Farrell, along with a photo essay of his most recent project.

Here I am, watching what seems like an intricate dance between three people—shaping, rolling, blowing—and then back into the glass furnace again. It starts out slow, then speeds up, then slows down. It’s choreographed. As he works the cork paddles on either side of the glass, a large, colorful lollipop takes shape. Peter Galetto, Jr. has already prepared the pattern, the cane glass, and the colors the day before. Now after a full day at the office, he spends his evening blowing glass at WheatonArts in Millville with the help of Staff Artist Skitch Manion and Assistant Lauren Federici, to shape his design into a vase. Hands-on craftsmanship, inspired creativity, and connection to community—these are a few of the benefits Galetto enjoys from glasswork, which has been his artistic pursuit for more than seven years. His day job is president of Stanker & Galetto, a general contracting company based in Vineland. His day “typically varies from meetings, informally with people at Stanker & Galetto, getting estimates together, and preparing for meetings with the owner or a customer who wants to build a building. We give a proposal and go through questions.” Galetto manages several other companies and non-profits, and he serves on the Board of Directors of Inspira Health.

He sees glass work as an opportunity to manage a project of a different kind.

“It keeps me mentally engaged,” Galetto says. “The work stuff is on my mind often. When I’m engaged, I have to put it aside. It relaxes the tension from work. I think I have the kind of mind that stays engaged.”

Glass is different work, but similar in some ways. Just as he has to prepare for meetings, plan projects, and manage a team to get the job done—before he can work and blow glass, he spends days beforehand planning, preparing, and coordinating the team. “Each one has a plan,” he explains. “There are 20 steps, and you choreograph each step. Glass is a team sport. Glass is a lot like construction. One person can’t do it all. For a manager, the true test of [your] mettle is how well it runs without you. You can’t be there every day. In my glass blowing, I’m more there in the moment. Sometimes I am the craftsman, sometimes I’m the manager. But most often, I’m the craftsman.”

A long-time art appreciator, Galetto says glass wasn’t his first artistic pursuit. “Where it started? I went to a wild turkey dinner fundraiser where we learned how to carve a bird,” he recalls. “I won an auction item for a woodcarving kit. I realized I could take a hunk of wood and make it into something.”

Galetto was no stranger to woodwork, but it had all been in the carpentry shop: “I stopped using a ruler. It allowed me to imagine more things. I was no longer constrained.”

Galetto carved wood for more than three years before switching to clay: “Each time you change your craft, you have to learn the rules of the game. You work from a foundation. Then you learn to build something bigger and better as you understand the possibilities. It’s like construction. Once you build a foundation—say for a house—first you have the basement, then the first floor, then a roof. Once you have it enclosed, you can make built-in furniture, a garden, a sidewalk. More possibilities open up. Clay is a beautiful craft. It also has a social aspect. Clay College was a really good experience.” (Galetto worked with clay for a decade at Clay College in Millville before switching to glass.) “I really wanted the light to come through my work. I wanted the vibrant colors,” Galetto explains. “With clay, you have more time. You can touch it all day long. You can consult with others, fix things. With glass, it’ll turn cold. You have to be spontaneous—80 to 90 percent of the work is done at the bench when things are hot. I get seconds.

“Whether it is art or poetry or writing a book—we tend to do something that is fun, that doesn’t give you much aggravation; instead it gives you great satisfaction. I am totally gratified if the plan I’ve put together gets recognized by those I respect. If it fails, it’s a floor model.”

That is the term for glass that ends up broken on the ground. “You use it as a learning experience,” he notes. “You ask, ‘What could I do differently?’ ”

He shows a vase as an example. He intended the line to be in the middle, but it ended up in the lower third. The next time he made a similar piece, he started the line much higher, anticipating where it would end up after being added to, blown, and shaped.

Glasswork also connects Galetto to the community: “I’m fortunate that I’ve had a successful business career. Many glassblowers are hand to mouth. I don’t sell my work; I give it away. It gives me great satisfaction to give my work to charity. I give a $2,000 piece to an event that can raise that.”

Galetto wants to make sure the piece sells for what it’s worth; if it doesn’t, it can hurt other artists: “I don’t want to do that. My angle is to help other artists.”

When his pieces raise a good amount of money for charity, he’s pleased: “I have fun doing the glass. I have fun seeing people enjoy it. It’s a double payback.”

An evening at WheatonArts is peaceful, with the quiet hum of the glory hole, the term for the red-hot opening of the glass furnace. Its warmth feels good as the evening has turned chilly. Galetto crafts three pieces, similar in shape but different in design and use of glass. His first is a “bit piece” that is the flower Black-eyed Susan; he layers colored glass onto the gathered glass. Then he makes a vase of a sunset, which is laid out like sand art, but out of glass. He was inspired by a photo he took two years ago of the sunset on the river.

His third is a Murrini vase, which is made with cane glass. His team takes turns. Galetto is working his design, with Skitch Manion, master gaffer, providing input at critical stages. Federici operates the blowpipe. The three of them are in a conversation while creating the piece.

To improve as a glassblower, Galetto draws on the wealth of local resources. At Salem Community College (SCC), he participates in a weeklong glass workshop entitled “Less is More” with Brooklyn-based glass artist Adam Holtzinger. It focuses on the fundamentals of glass and hand skills. “There are a lot of steps,” Galetto explains. “You have to get the right amount of glass, heat it right, and have the right strategy. You have to know what you’re going to do when you grab the pipe.”

SCC offers workshops all summer, says Kristin Deady, the Glass Education coordinator. SCC also has a Scientific Glass program, the only one in the nation, and a Glass Arts program; both offer associate degrees. Deady says they have 130 students in total: “We’ve tripled the student population here since five to six years ago.”

Galetto has also worked under glass artists out of state and abroad. In 2015, he attended the Pilchuck Glass School in Washington State, which was co-founded by world-renowned glass artist Dale Chihuly. Earlier this year, he studied one-on-one with a Glassmaestro, the title for a master glass craftsman, in Murano, Italy.

“This is someone with years of experience at the bench,” Galetto notes. “There is not as much on education as on craft. I saw different ways to use color. I saw the same stuff, but used it differently. It opened possibilities.”

Galetto’s sense of possibilities is especially apparent at his home. Glass lanterns light the footpath in his backyard. An enormous bush was created out of multi-colored glass flowers. A glance into the trees is delightful as several glass hot air balloons are lit up. Tall yellow and pink spears shoot up out of the garden by the fish pond. An arbor is adorned with glass flowers. It is a magical walk down the river, past the totem pole he carved. Top to bottom are animals native to South Jersey—bald eagle, osprey, white-tailed deer and more.

Down on the Maurice River is the crowning jewel, a rowboat tethered to the dock. It is filled with colorful enormous glass balls, lit up and reflecting onto the river at sunset. The effect is stunning.

“Why should art be reserved for inside only?” he asks.

Indeed, the possibilities are endless.

A Boatload of Fun Facts • Sculpture is named “Journey to a Better Life.”

• The four cables it hangs from are capable of supporting much more than what it weighs.

• The boat is made of stainless steel and is 16 feet long.

• There are 150-plus pieces of glass in the sculpture.

• There are lights in it and on it.

• Galetto put in more than five months time—about 300 hours of his personal time and logged about 200 hours of craftspeople, designers, and helpers of various kinds to complete it. Galetto says, “Jane and I donated it to the hospital but the hospital did incure costs to accommodate it into the structure of the building and electrical lights to be able to display it properly.”

Jane adds, “He worked five to six months on it, and most every day he had some type of time in it—imagining, blowing glass, making a wooden prototype, working with CAD operators for a pattern to be cut from steel, welding, the hospital staff for structural mounting and more. I got involved in three weekends or so of arranging…I got to tag along on a lot of the adventures…his work as a general contractor makes him a uniquely different artist. He thinks in terms of teams, collaboration and installation…. Also, being a commercial contractor he thinks big. I wouldn’t be surprised if the proportion of his works expands to larger items in the future. I look forward to what’s next.”

So do we, Jane and Peter!