It translates to a limited world but a no less fascinating one. 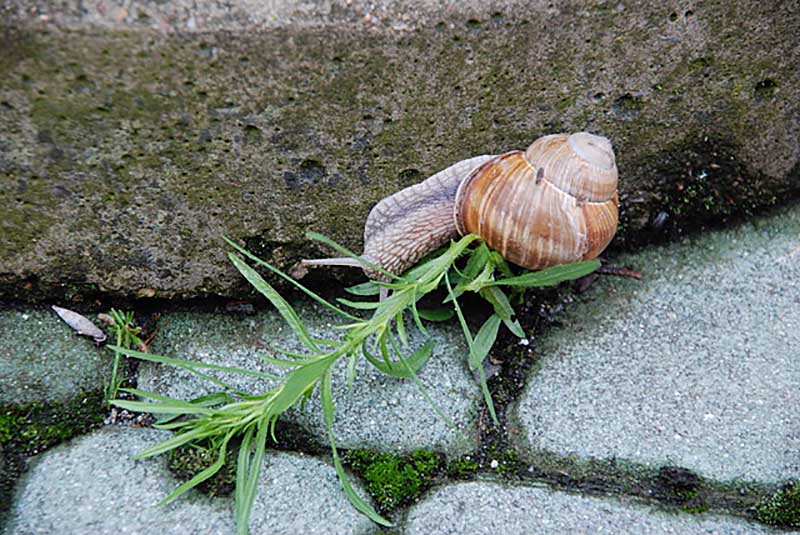 It’s been a few years since I heard an interview that Elizabeth Tova Bailey gave about her remarkable experiences living with a whitelip snail as a companion. Her highly acclaimed book The Sound of a Wild Snail Eating is charming, enlightening, and insightful. Famed ecologist Edward O. Wilson declared the account by the author about the solace she received by observing a snail during her bedridden illness as simply “beautiful.”

Bailey’s 2010 book has generated newfound interest during the COVID pandemic, because of the connection that many people have felt during quarantine to her story of isolation. A virus left Bailey with an autoimmune disorder that over 20 years’ time resulted in periods of immobility. In her diminished condition she was able to appreciate the limited world of a snail in a terrarium next to her bedside. Her account is captivating, expressed in prose that is nearly poetic.

She enriches her book further with wonderful accounts of a snail’s natural history—mollusk group, gastropod classification, anatomy, defenses, locomotion, intelligence, and courtship behavior. In anticipation of writing this article I also did a bit of research into the escargot industry, which was somewhat of a mental jolt when contrasted with the admiration that Bailey developed for her companion subject.

One of my first encounters with a large number of land snails was in Wieliczka, Poland in 2008. The garden of a restaurant we visited, after touring the famous Wieliczka salt mines with their unusual sculptures, was covered with large snails similar in size to our aquatic apple snails (golf ball-sized). In researching where escargot are farmed, I discovered that the Polish industry is growing rapidly. Evidently the Poles don’t have much of a palette for the snails but their French, Spanish, and Italian neighbors do, to the tune of collectively importing over $30 million dollars’ worth annually (2019 Trendeconomy).

The climate in Poland offers ideal conditions for rearing them. In the wild, snails take up to three years to become mature, but in farmed conditions they are market-ready in six months. In 2011 there were three snail farms in Poland; today there are over 200, providing more than 1,000 jobs. I highly suggest a YouTube video of the Noal Farm in Poland to get an idea of the scale, modernization, and sophistication of the industry. And Poland is not even listed in the top 10 exporters of snails. Their products consist of snail meat, caviar (called white gold), shells, and cosmetics made from snail slime, primarily face cream.

For this story my interest is in the natural history of wild snails and their role in the environment. It turns out they’re a lot more interesting than you might suspect. The Carnegie Museum lists 93 species of snails in New Jersey. Naturalist Karl Anderson asserts that in the state you are likely to see only the “white-lipped” (Carnegie M. common name: whitelip-Neohelix albolabris) also called the “garden-banded” snail. The others are much smaller and stay hidden in the duff layer of the forest, as they decompose dead matter and create soil. The whitelip will also eat fresh or dying leaves but is much more easily spotted.

Like slugs they produce slime. Evolutionary biologists contend that slugs evolved after snails and are basically the same creature without the shell. And aquatic snails pre-date both. Slime serves many functions, and slime and moisture are really important if you are a snail. In dry weather they may aestivate and maintain a dormant state, similar to hibernation, lowering their metabolic rate and staying safely enclosed in their shell. In winter they will hibernate from approximately October to April in the Northern Hemisphere. Their slime is employed to make a cement-type substance to seal the shell off from the elements of winter. This closed door is called an epiphragm. After it dries the snail recedes deeper into its shell and makes a second layer, so essentially there is a door and a storm door.

Slime is produced by a mucus gland and has different uses and consistencies. Protective slime is their main defense, making them hard to get a grip on. When healing from an injury slime has antioxidants to help in the process. When clinging to surfaces they employ an adhesive-like slime. They make a pedal mucus that allows them to glide along, and although they are solitary another snail might make use of their slime trail in order to conserve moisture. In courtship they can leave pheromones in their slime trail for would-be suitors.

Courtship can be a rather lengthy process. These gastropods are hermaphrodites and as such have both male and female genitals. So they are capable of fertilizing themselves, but really, what fun is there in that? Also genetic diversity is dependent on mixing up the gene pool. So although they are solitary they do seek out mates. After following a pheromone trail there is a lengthy vetting process or foreplay, during which time they determine who will take the male or female role, or sometimes both.

Let’s discuss the tentacles, or their four hornlike antennae that play a role in mating. There is an upper and a lower set. The longer upper set are for sight and smell. Snail vision is very limited, sensing essentially light, dark, and little more. But they are able to detect and differentiate odors from airborne molecules. Their lower and shorter tentacles are for taste and touch. They use these lower tentacles for tapping, as a blind person utilizes a cane, continually sampling tastes as well. They have no sense of hearing. Their tentacles are the only mucus-free part of their bodies and if they lose one they can regrow it, similar to a starfish’s regeneration ability.

When they encounter a suitor the lower set of tentacles is used to check out their prospective mate. Now for the scary part—one will stab the other with a calcareous or chitinous “love dart” from a hidden sac, determining who will play the female role in the relationship. This is a tiny calcium spike shot by one of the pair. About a half hour later copulation will commence. Tiny is a relative term and Joris Koener, gastropod researcher of Vrije Universiteit in Amsterdam, puts this dart into a human scale and suggests it would be similar to a 15-inch stiletto. I, for one – cringe. Not all snails are so equipped, but my understanding is that the whitelip is packing the dart. It can also store sperm in its body and choose not to fertilize eggs until months later. Ultimately about 50 to 100 eggs will be hatched after about a month—if the caviar hasn’t been consumed by some forest creature.

The mantle secretes a material at the shell’s opening allowing it to grow over time to accommodate the growing body. In a couple of years the snail will reach maturity and lose the white lip on its shell.

Snails have radula, or thousands of teeth in multiple rows much like a rasp. As the front row is worn down a back row moves forward to replace it. In fact, Elizabeth Tova Bailey was possibly first attracted to her unlikely interspecies companion by its munching noises, thus the book’s title, The Sound of a Wild Snail Eating. It ate a number of holes in her letters, being attracted to cellulose. Subsequently she provided it with a natural diet of plants, and water in a shell to supply calcium.

Snails are an important part of many animals’ diets. Birds, mammals, and reptiles often eat them, while skunks, mice, squirrels, shrews, salamanders, toads, and turtles find them particularly tasty. The aquatic apple snail is a favorite of the limpkin and snail kite. A fun fact is that the snail kite is the only raptor that captures its prey by using its beak versus its talons.

So are all wild snails fit for human consumption? Well, evidently yes, but with a number of caveats. Remember you are what you eat? If a snail has just digested a plant that is toxic then you too can be exposed to the poison. The giant African snails can be gutted, but most small species are eaten whole. Therefore if you planned to partake of a wild snail you would want to contain it first and let it purge by feeding it possibly a diet of lettuce, cornmeal, carrots, and water. And it would need to be washed and cooked. Remember that soils harbor salmonella and botulism. Snails can carry parasites, pathogens, and things like lungworm that can cause meningitis. Also you might eat some poor declining species. So my recommendation is to stick to those that are raised for consumption.

If you are grossed out by the idea of eating snails, consider that you quite possibly have eaten members of the mollusk family already—oysters, clams, mussels, scallops, squid–calamari, and welk/conch–scungilli (which by the way is a sea snail). Snails are as high in protein as beef and pork without the fat content. They are also high in iron, calcium, and Vitamin A. They need calcium for shell growth and interestingly they are the only land animal that can find calcium by scent. The most traditional way to prepare them is with butter and garlic; they are a pricy delicacy in Europe and in fancy restaurants here.

I highly suggest reading Bailey’s book, but not just before devouring a snail, as her story builds quite an admiration for the slippery little gastropods.