...grows a mighty oak that has stood witness to sun and rain since Revolutionary War days. 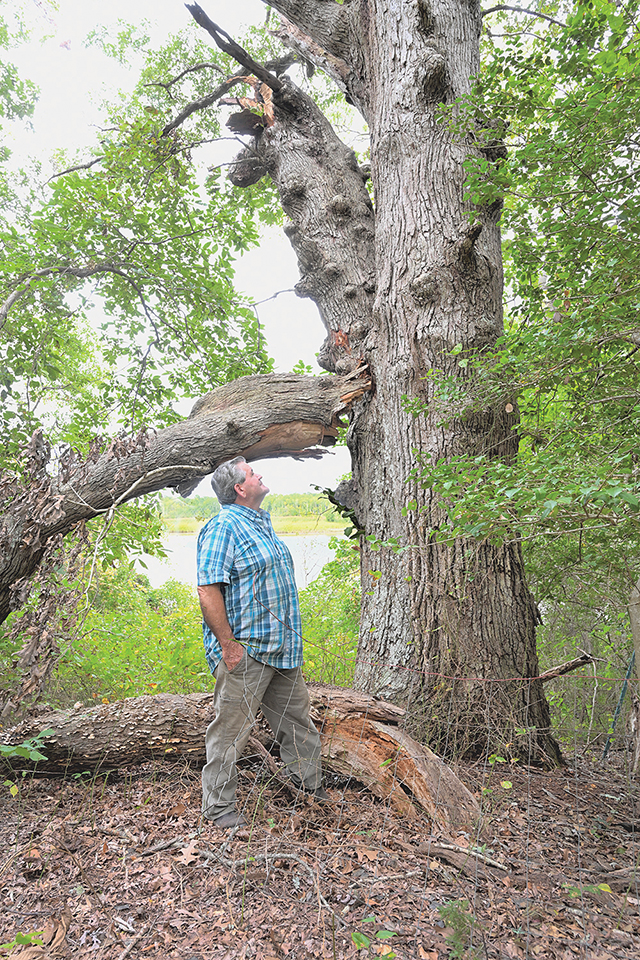 If you are a regular reader of this newspaper, you may recall that a few weeks ago (September 4) in a feature article titled “A Tree, A Boy, A Fish,” I spoke about the gnarled behemoth white oak on our property. And I promised in anthropomorphic fashion to talk about what it has seen from the banks of the river. It is in no way stately. It stands with scars and burls, showing that it has withstood the test of time and the wars of nature. But like all life it had humble beginnings.

Under moist leaf litter after a cold winter, it sprouted from an acorn and began life as a sapling—a child of sorts, innocent about the trials it would endure. In my comparatively brief life, it has been coated with an inch of ice and seen over 19 inches of snow, a big deal here in southern New Jersey. It has withstood Superstorm Sandy, housed nests of squirrels and bees, and been tested by 80 mph gusts. My shared history is just a blink of an eye next to its likely Revolutionary War beginnings.

When it was about 20 or 30 years old it probably produced its first acorns, becoming a massive supermarket of sorts for local wildlife. It commenced to propagate; squirrels, those foresters, unwittingly sowed acorns in forgotten stashes, which sprouted into what might someday become mighty oaks. As a white oak, it grows and sheds its acorns in three months or one growing season. Conversely, the black oaks (also called red oaks) take about 15 months or two seasons to produce acorns. Acorns are a major food source that fuels the forest’s animals. This “forest mast” is normally described as being either hard or soft. Soft mast consists of berries and fruit produced by dogwood, black gum, blackberry, crabapples, blueberries, serviceberries, maple seeds, mulberries, cottonwood, hollies, and the like. It is fleshy and perishable, and normally high in sugar, vitamins, and carbohydrates. In winter months, it is generally in short supply. During drought, most soft mast is aptly timed with breeding seasons and provides necessary moisture.

Hard mast is hard-coated nuts and seeds like hickories, walnuts, beech, and yes, the acorns of oaks. The importance of hard mast is that it has higher energy content and lasts during winter months—a longer shelf life, so to speak, and typically high in carbohydrates, fat, and protein. This combination provides energy for the cold season forager.

When acorns are in great abundance with a bumper crop, this is called a mast year. Kim Coder, Warnell School of Forestry and Natural Resources, University of Georgia, attributes these occurrences to localized weather. Spring frosts, summer droughts, and fall rains influence the outcome. Coder cites frosts as being the predominant stimulus. During these events a tree can produce five to 10 times more acorns, a bonanza of sorts.

Who, you might ask, are the beneficiaries of the forest’s hard mast? A better question might be: Who isn’t? Chipmunks, squirrels, turkeys, blue jays, grouse, deer, coyotes, bobcats, fox, raccoons, opossums, waterfowl—especially wood ducks—and a host of invertebrates. The Ohio State University Extension Service maintains a chart of specific species of hard/soft mast plants that support specific animals (mnn.com, then search “acorns some years”).

Desiree Narango, a lead researcher as a PhD student for Douglas Tallamy at the University of Delaware, has ranked vegetation in terms of its benefits for moths and butterflies. Oaks sustain 557 different species of caterpillars! It is estimated that a brood of five chickadees may need about 6,000 to 9,000 caterpillars to fledge. Oaks are at the top of what Tallamy calls the lepidoptera index, based on the diversity of moths and butterflies supported. This all adds up to one big hooray for the birds and those who enjoy them.

With this knowledge you can do what you probably now wish you had done 30 years ago: Plant an oak. It’s not too late to do that for a child or a future critter, or if you’re a young person yourself. When I stand at the base of our mighty oak and gaze upwards, it is hard to imagine its tiny beginnings. Such are the marvels of nature.

Many of our forefathers, as well as other cultures and people who regularly forage from nature, have enjoyed acorns. They are edible but need to be properly prepared, as they contain high concentrations of tannic acid, which is toxic to humans. Brown, not green, acorns must be used. Most sources suggest using white oak, especially the chestnut oak whose acorns are larger and tastier. The acorns must be soaked, and those that float must be discarded. Then they are boiled and peeled; repeated boilings are necessary to remove tannins. Red/black oaks are higher in tannins and therefore more bitter.

Many people like the flavor and there are nutritional benefits—vitamins A and C, fats, and carbohydrates. I tried preparing acorns years ago and if eating acorns is as good as some folks claim, I either botched the directions or have a very different palate than those who recommend them. If you choose to try it, you can find directions for various preparations online.